A short email from a friend and “traveller to all places weird and wacky” caught my eye and had me immediately checking dates in my calendar to get to Mt Yasur, Tanna Island, Vanuatu. Stewart had enthusiastically described the angry bowels of the earth venting and spitting molten lava high into the night sky. I was hooked. The fact that Captain Cook made reference to the distant glow and constant eruption of Mt Yasur as he plundered the Pacific meant it’s been angry for at least two hundred years. Vanuatu here I come.
But before I tackled Mt Yasur there was an interesting Saturday morning to be had on the nearby Pentecost Island, an island North of Port Vila. Each year between April and May the men of Pentecost construct a rickety 30m high tower, tied together from local trees and then voluntarily throw themselves off. But first they lash young green (elastic ?) vines to their ankles. Some say a safe land dive is a guarantee for fertile crops. Others say it’s a re-enactment of a folklore argument between a husband and wife. Another is supposedly proof of manhood ( and unquestionable stupidity )
Anyway three light aircraft plonked a group of interested foreigners down on a small airstrip hard against the ocean on Pentecost Island. We were then herded into the back of a group of trucks for a rather sloshy drive through small rivers and rich volcanic mud into the nearby mountains. We slid from the trucks into sticky, thick ankle-deep mud. 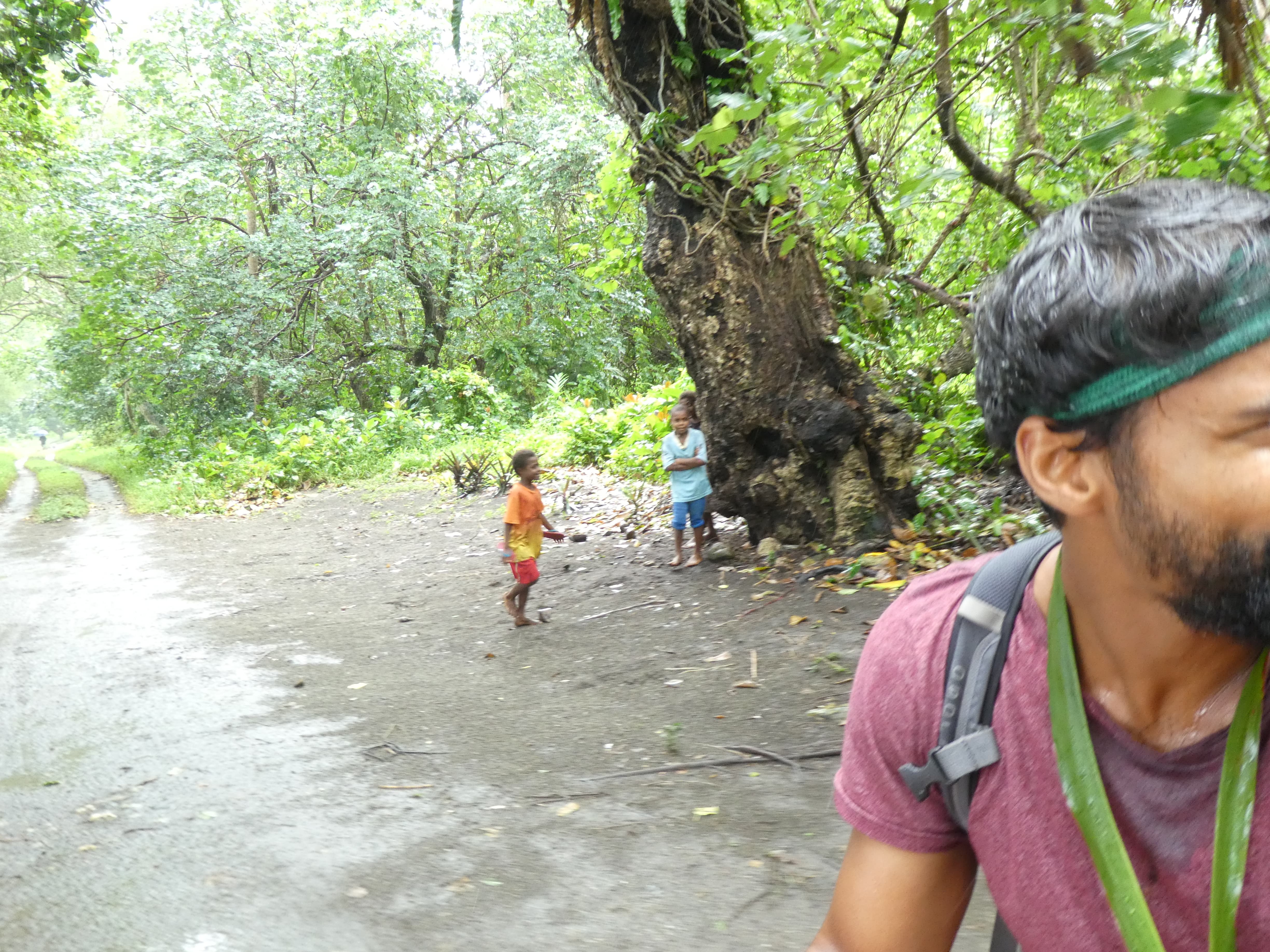 Immediately you knew your shoes would not make the return flight home. Soon the rain started, annoying at first then heavy enough to have your clothes stick hard to your skin. Camera lenses fogged up or blurred with raindrops every time you pointed them skywards. Meanwhile higher up the hill overlooking the tower, local women and a dozen young boys oblivious to the rain chanted and beat a rhythm. It was hypnotic and reassuring to hear the singing. Silence would have caused the smell of fear to permeate the hillside. Instead all you could smell was rich, rotting vegetation. The rain continued to tumble. 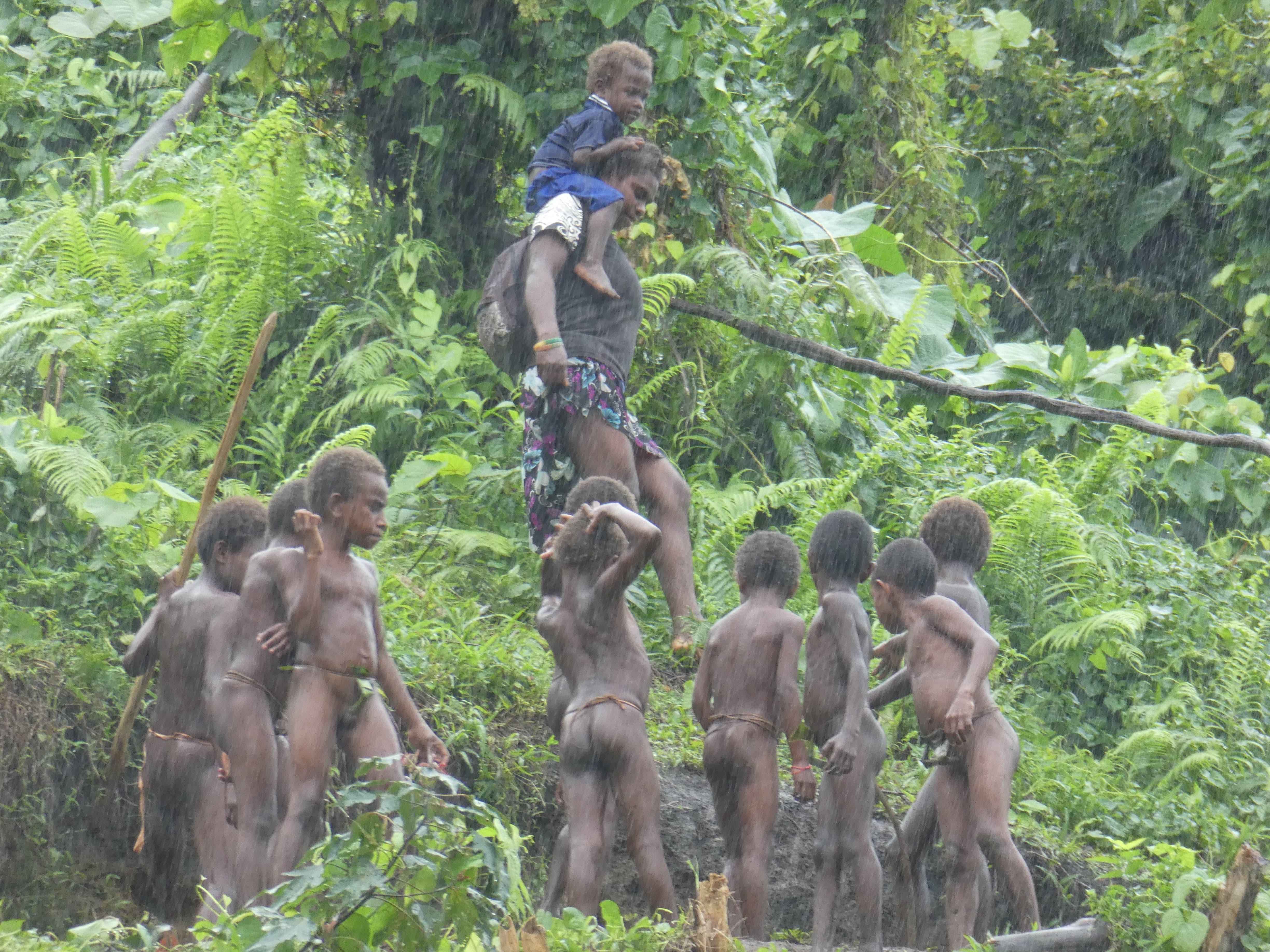 The divers looked like black stick insects against the grey skies as they clambered about on the rickety structure keeping busy so as to not think. Preparing as best they could for their dive. 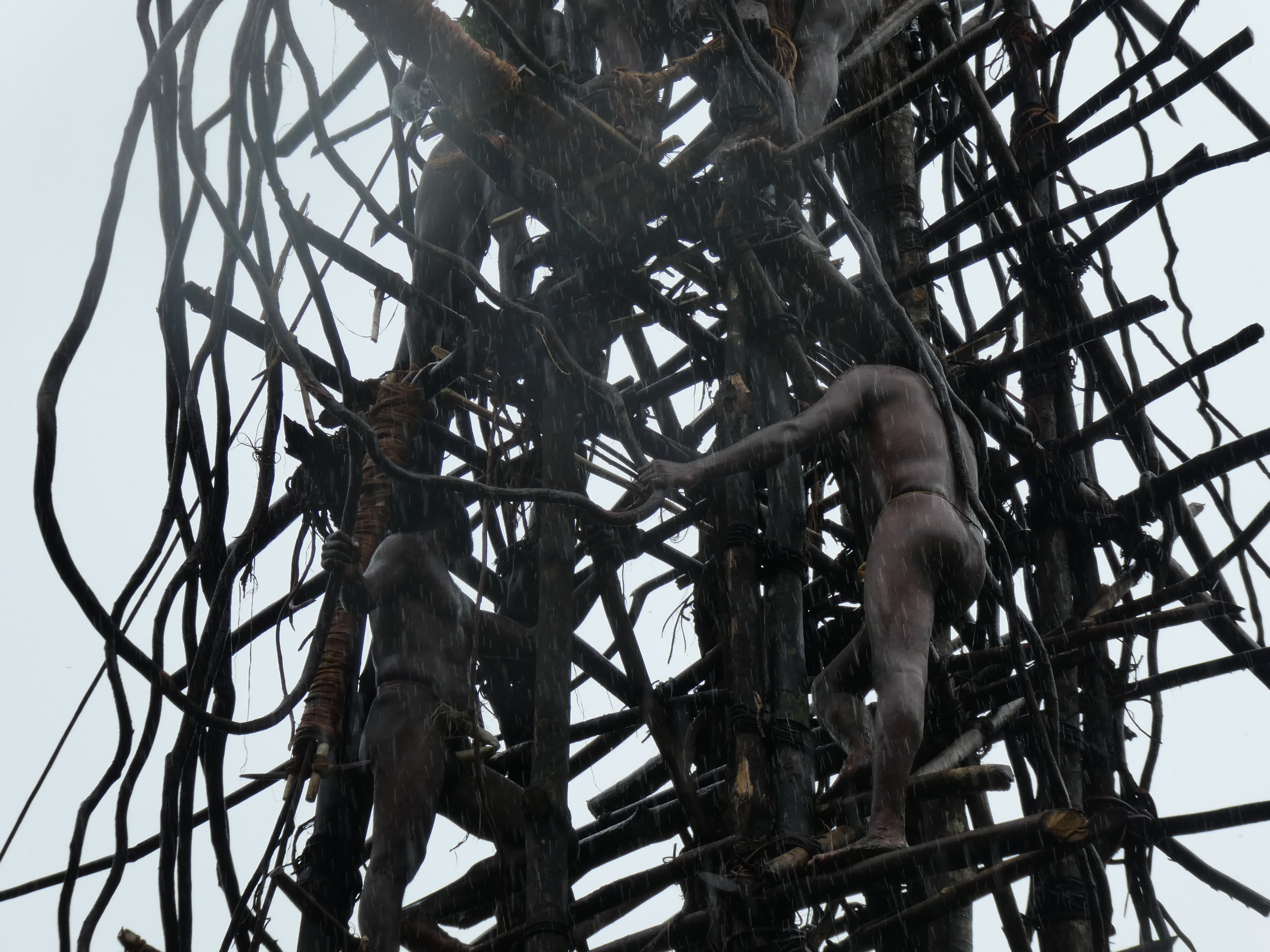 There is no poetic way to put this. One after another they plummeted towards the earth till they hit the thankfully soft mud usually head first. The guidebook calls it a soft glance of the head but it was more like a thwack, a splat. Once a loud crack rang out as a ‘branch’ snapped from the structure. 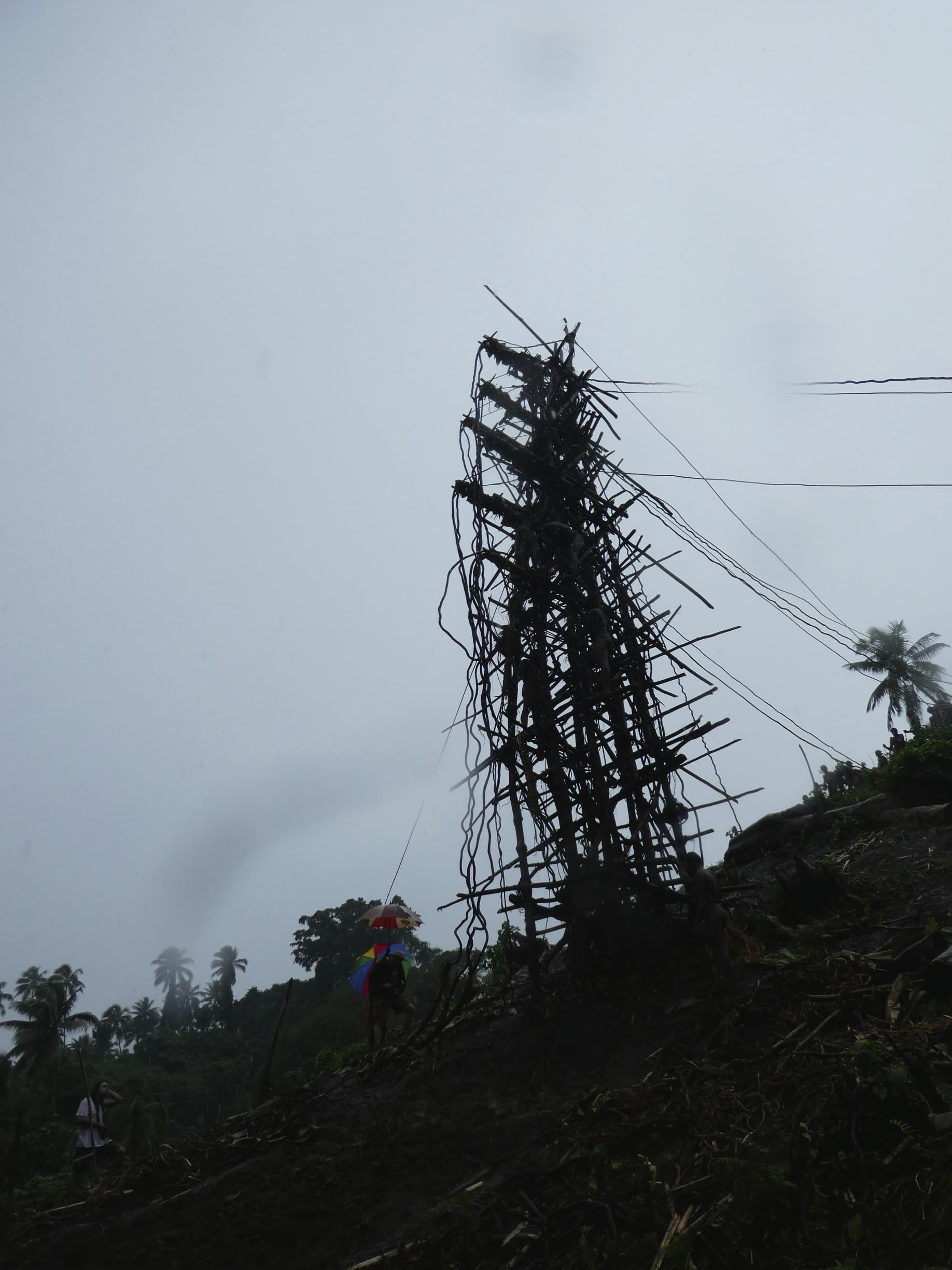 Each time I felt the abrupt stop from a few metres away, it didn’t get easier to watch. Each time from a little higher. Each time the diver would cry out to the gods throw their arms up appealing to whoever would listen but they all landed the same. Whoever measures the vine lengths needs a new tape measure, maybe the jumpers should buy one for him ? That said, they all got up smiling and I guess happy to be able to wave their still intact arms and wipe the mud from their mud caked heads. 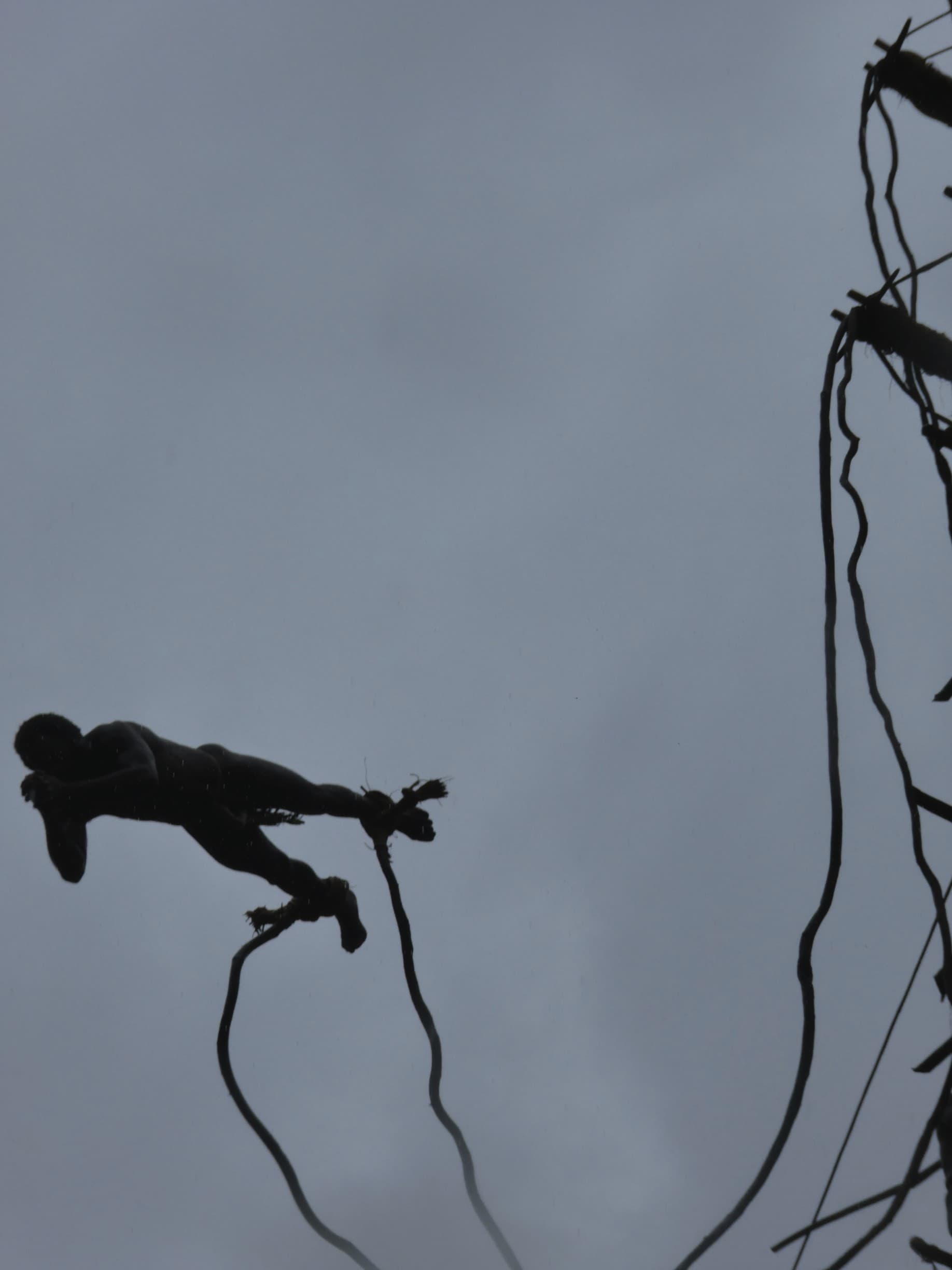 There had been no commercialism at the jump tower, no-one selling souvenirs just a curious group of foreigners and a couple of dozen amused locals who held large leaves over their heads when the rain turned from heavy to torrential. 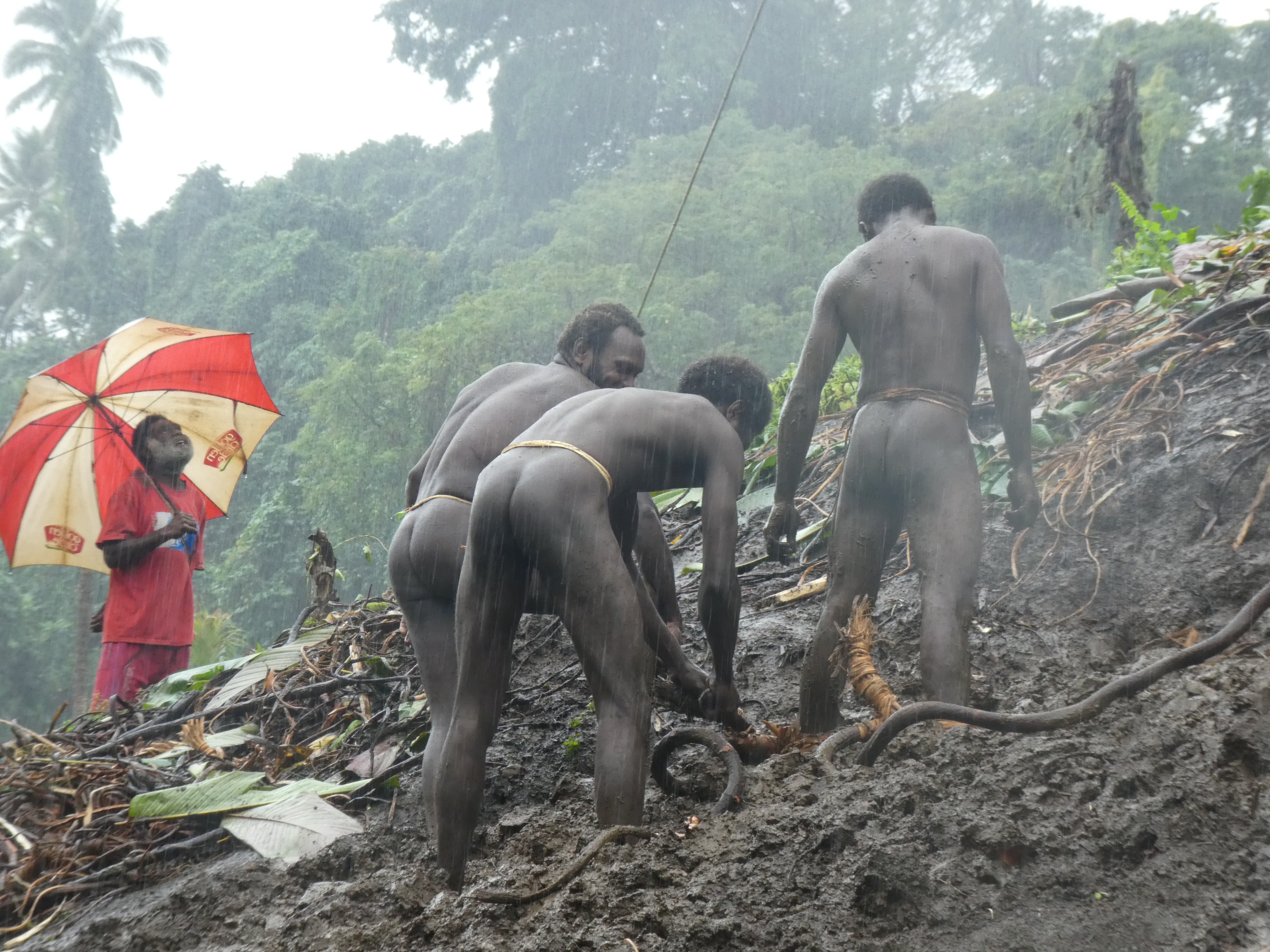 At the end we simply slid back towards the trucks, stepped up into the back, the rear trays now resembling a small toddlers pools. We tried to take in what we had just witnessed as the water flowed backwards and forwards over our shoes on the bumpy drive back to the airfield.
Spent a night in Port Vila then off again this time to Tanna Island. There is a recent movie of the people of Tanna, I have yet to see it, I could have saved myself some dollars and eaten my body weight in popcorn in a theatre at home but there’s nothing like seeing it for yourself. The main highlight of Tanna is the overactive volcano, Mt Yasur and my real reason for visiting. A stay at White Grass Ocean resort is a must when visiting.
A bumpy two hours in a 4 wheel drive takes you across vast lava plains to the volcano base in the late afternoon. A ceremonial dance with the locals follows and finally a blessing from the chief allowing us to climb up onto the volcano rim. The first night we climb in swirling cloud and rain only to be sent home you can’t see the person in front of you. We catch glimpses / flashes of the angry volcano burping and belching its molten lava. In the dustance. We’ll simply have to come back. We bump off back to our thatched hut.

The following evening it is clear as we climb the mountain range to the volcano. We catch glimpses of the coast, see the trail of volcano ash from the mountain to the plains. The volcano spews thick, black clouds of smoke high into the air in a threatening welcome. The trucks take us up then we walk to the rim. Tonight we turn and climb higher suddenly the bubbling cauldron is visible and it explodes regularly spitting huge rocks high up on the mountainside, they sit there glowing brightly till their outer crust cools. The energy is unfathomable, I feel so minuscule standing there. My school science lesson, the one I almost fell asleep in, the one about the earth having a fiery centre is now believable. Darkness comes and nature’s show only becomes more spectacular. Forget festive Sydney Harbour on New Years Eve, this show is anger, volatile and almost venomous as sonic bangs actually jolt you. Swirling clouds of sulphur engulf you and blazing, molten rock the size of small cars shoot into the air. A massive bang and I watch enthralled then shout a warning as a molten rock heads our way. We turn and watch unable to move, hear it land with a dull thud twenty metres away. Nancy, the guide springs to attention yelling that we must move. Instead the Chinese move towards the lava boulder glowing nearby, one lights his cigarette from the lava as another takes his photo !

The show is all over as far as the guides are concerned they have been spooked. Personally, I think that lightning doesn’t strike in the same place twice and we are safe for at least another lifetime up here. It’s time to go home while Nancy can account for all in her party, she probably doesn’t get paid unless she returns a full quota. Safely back at the base we brace ourselves in the trucks for the two hour trip back to the hotel. The Chinese light their cigarettes off the lava rock.
The following morning we jump a small fishing boat and head to the Blue Cave half an hour along the coast, the water changes from turquoise to aqua. With little style but a lot of enthusiasm we non-locals flop into the ocean and snorkel towards the cave’s small opening near the shore. At first it’s dark inside the cave but slowly all is revealed. A section of the roof has collapsed allowing a shaft of light to penetrate down into the water like a torch. The hole is laced with glossy green tropical vines, the rest of the cave is dark and gloomy in comparison. Around us a myriad of small reef fish swim beyond the light attempting to stay unnoticed. 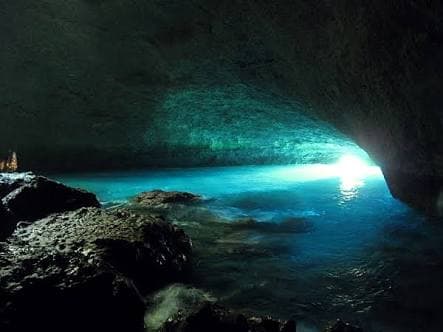 We feel like small children in our secret hideaway. Eventually we leave to explore more of the reef, spot a turtle grazing on the grassy bottom, race a dolphin across the flat sea and wave to the locals fishing in their outrigger dugout canoes before arriving back at the resort. It’s been a great week away, not your resort type holiday with cocktails at sunset, stretching out by the pool, sleeping till late or staying up beyond dark but it’s been a terrific window into the Pacific Islands. The simple rhythmic island lifestyle, the volcanic soil allowing them to grow almost all that they eat, much of it root vegetables and tropical fruits, the complete absence of packaging. It shows in their strong lean bodies, their bright eyes and strong teeth. 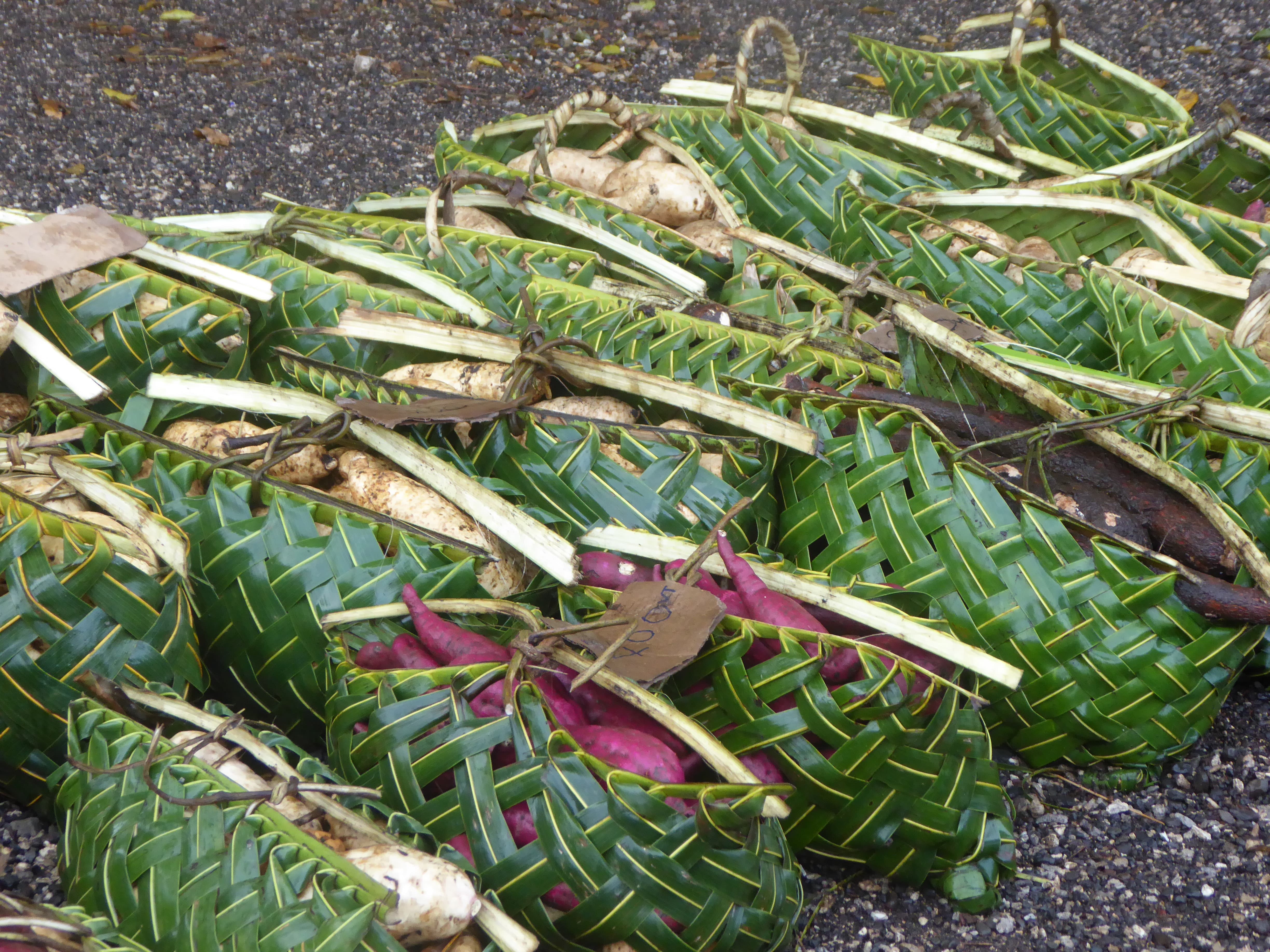 They are a friendly people, generally shy and reserved. “We don’t need jobs paying money when we need for nothing” they would say. Easy cheaper travel means they are being pulled between a bustling Western world and their simple village lifestyle. Many choose to stay amongst family in their small villages dotted along the coast and into the mountains. I was constantly amazed when locals would step onto the dirt roads out of nowhere. At night the roads were a constant stream of people going somewhere, maybe a cava stall where the men sip on this lip numbing root drink, maybe just visiting friends ? Vanuatu is a long way from anywhere so maybe they have a chance to keep their lifestyle intact for a few more generations, it made me question mine.