Hi,
An article in the current RACV magazine caught my eye. It was about a small lake formed by a landslide in 1954 within the Otway ranges in Victoria, Australia and the good, no better than even chance to see platypus in their natural environment. It rekindled a long time yearning to see platypus swim in the wild. I might finally see one.
Robyn had boasted of swimming near them at Porpunka, at the fork of the Buckland and Ovens river up near Bright. “Oh yeah we saw them all the time” The story was told often, I’m guessing because I had never seen one. Therefore any time we were near a lake or a river I could be found peering at the shimmering waters edge hoping for a sighting. This went on for years but I probably wasn’t in tune with the habits of these shy creatures anyway. It’s like looking for a drunk early in the morning a long way from a pub, you won’t find them there…. better you go an hour before closing on a Friday night. Knowing the feeding times of your prey is paramount !
I tried to make contact with the guy running the platypus tour, let’s call him Bruce because that’s what his parents called him. Bruce isn’t one for technology. Two weeks of phone messages and completing an online booking still hadn’t had me communicating with anyone. Finally when I had all but given up Bruce answered my call, he answered it like he was trying to stop the ringing in his pocket. I half jokingly told him trying to arrange this was as hard as seeing the shy platypus. He didn’t get the joke, I didn’t mention it again. A time was made, I crossed my fingers it would happen. I’d waited my whole life to see one of these unique mammals in the wild.
Kylie was unprepared for our trip into the Otways. To be fair she wasn’t told where she was being taken and was sporting enough not to ask. We drove West to Skenes Creek and then turned away from the sparkling surf and headed towards Forrest. My instructions from Bruce had been clear, meet me outside the Forrest brewery at 6.30pm, have cash. And the exact money I thought, Bruce won’t have any money other than the money I hand him, I was right. At Forrest we found the brewery was closed. A brewery that closes at 5pm is kinda weird. The sign on the brewery door suggested drinking at the Wonky Donkey, yes that’s the name of the local pub, not even I could make that up ! We gave it a miss unsure what actually went on in the Wonky Donkey and walked Hurricane till he was tired, returned to the brewery, gave him his dinner and I waited, Kylie didn’t know what she was waiting for.
Punctual Bruce was there bang on 6.30pm. Shook my hand, turned back towards his dusty van and mumbled “Follow me” he almost immediately lost us in a cloud of fine back road dust. Twenty minutes later we pulled up in the day car park of Lake Elizabeth National Park. We stepped from the car. Without words Bruce threw us each a life-vest, threw a small backpack over his shoulders and grabbed a paddle from his back seat. Kylie had finally twigged to my plan. I’d asked her to be lucky tonight, she knew I wanted her luck for a sighting of something. The paddle could only mean paddling on a lake, something she’d never done but again she just went with the flow. I guess at this point she had no choice. We trudged up a stiff hill and then it flattened off, Bruce had said nothing other than tapping the paddle on any stick on the path. Kylie asked why he was tapping the ground so often. “Someone saw a snake on the path last night, that all ” was his sparse explanation. 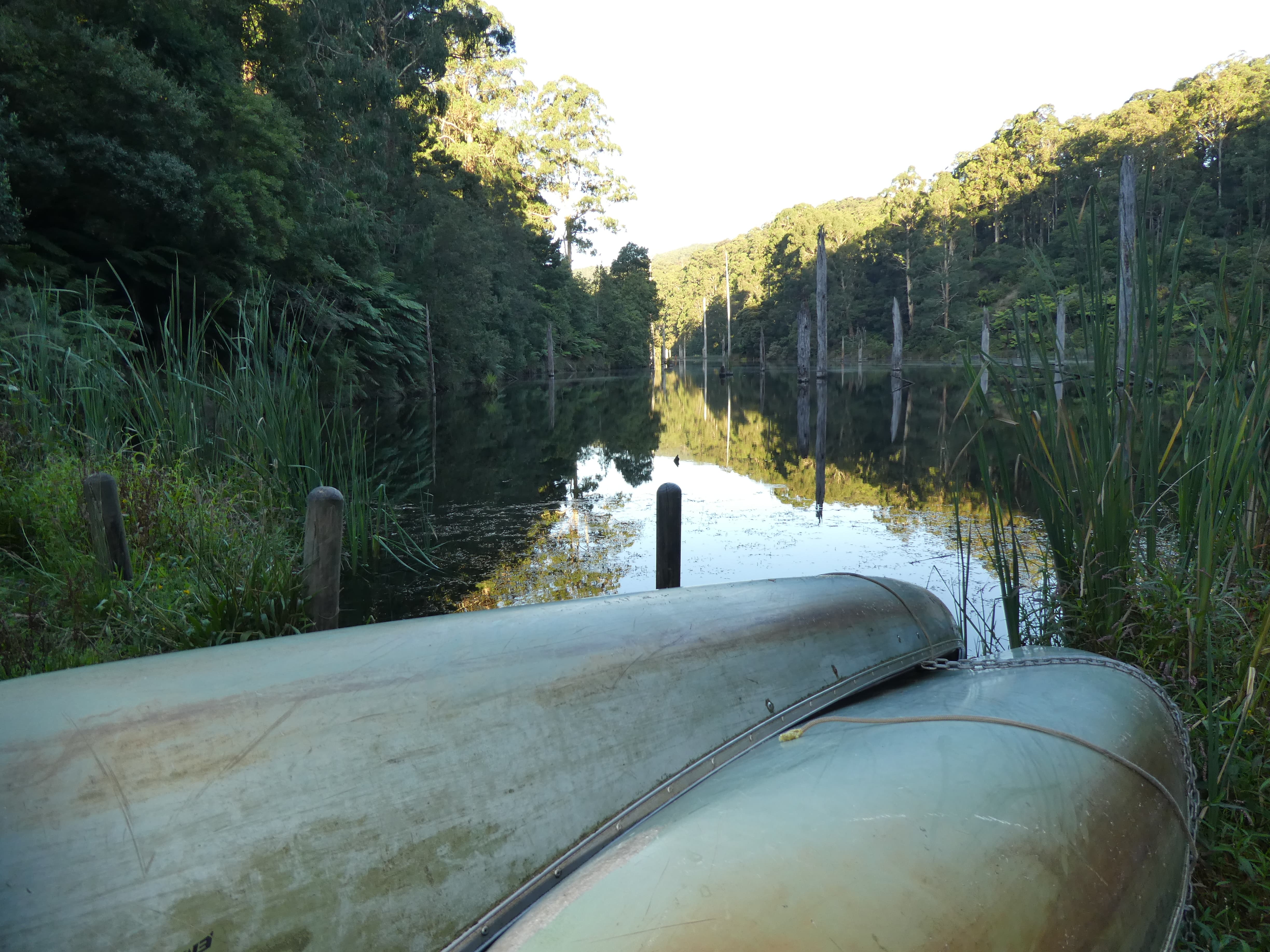 Suddenly the bush opened up and a black mirror of water stretched out in front of us, old gum trees punctured the lakes surface, tree ferns came down to the waters edge and seemed to be drinking in the inky still water. Nothing moved but high above the gum leaves rattled in the lightest of zephyrs. We stared out onto the black water whilst Bruce unlocked one of two canoes having fossicked about in nearby bush where he probably has the key stashed. We gingerly stepped in and awaited instructions, there were few. 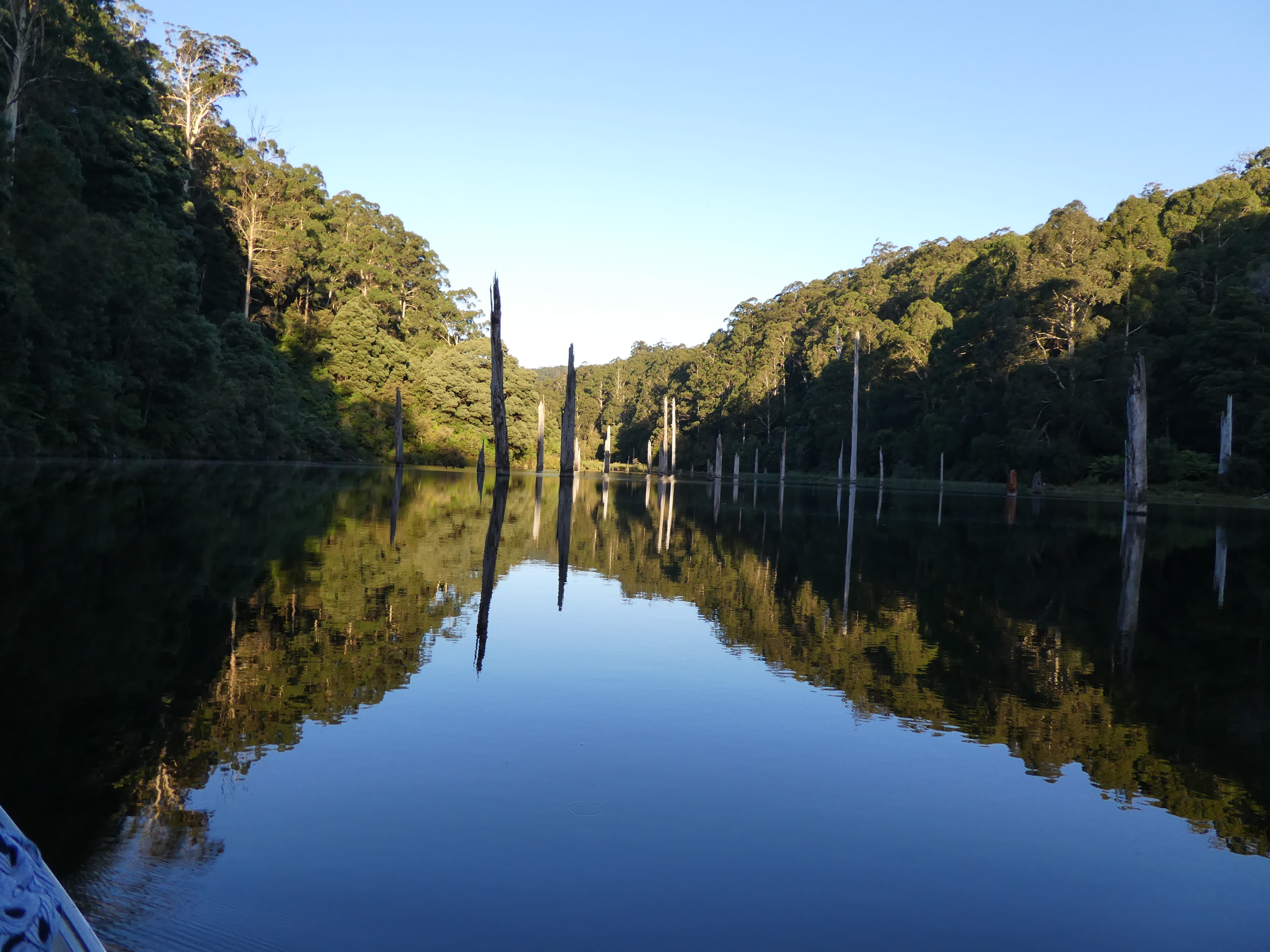 Bruce pushed off and we glided silently out onto the mirror smooth lake, it was a magical time of day. Dusk was looming and the longer we sat out in the water the more aware we became of our surroundings. Dragon flies swooped, the flat light catching their wings, the silence magnifying their drone-like whirl. Next came a fleet of noisy swallows, they arrived on mass. Swooping low, their beaks cutting a line on the waters surface as they caught fat insects before soaring high up into the air to digest them. “They’ll only hang around for ten minutes” confirmed a timetable driven Bruce, he was punctual to the minute.
We slowly made out way up the Lake, Bruce gently paddling and our eyes peeled for movement on the surface. We’d spotted movement a bit too far away to be sure but then finally a platypus scooted across the surface before just as quickly duck-diving out of sight. It was hard not to yell out in joy, not to high five and hoot in celebrate. Bruce kept a lid on things, “they scare easy” he whispered. There are six around the lake and at least one maybe two babies. As darkness slowly descended over the lake the platypus showed themselves more regularly. A splutter across the flat black surface before lifting slightly then diving for food. “Eyes and ears closed underwater they use some form of sensors to locate their food” Bruce whispered as we peered into the twilight. 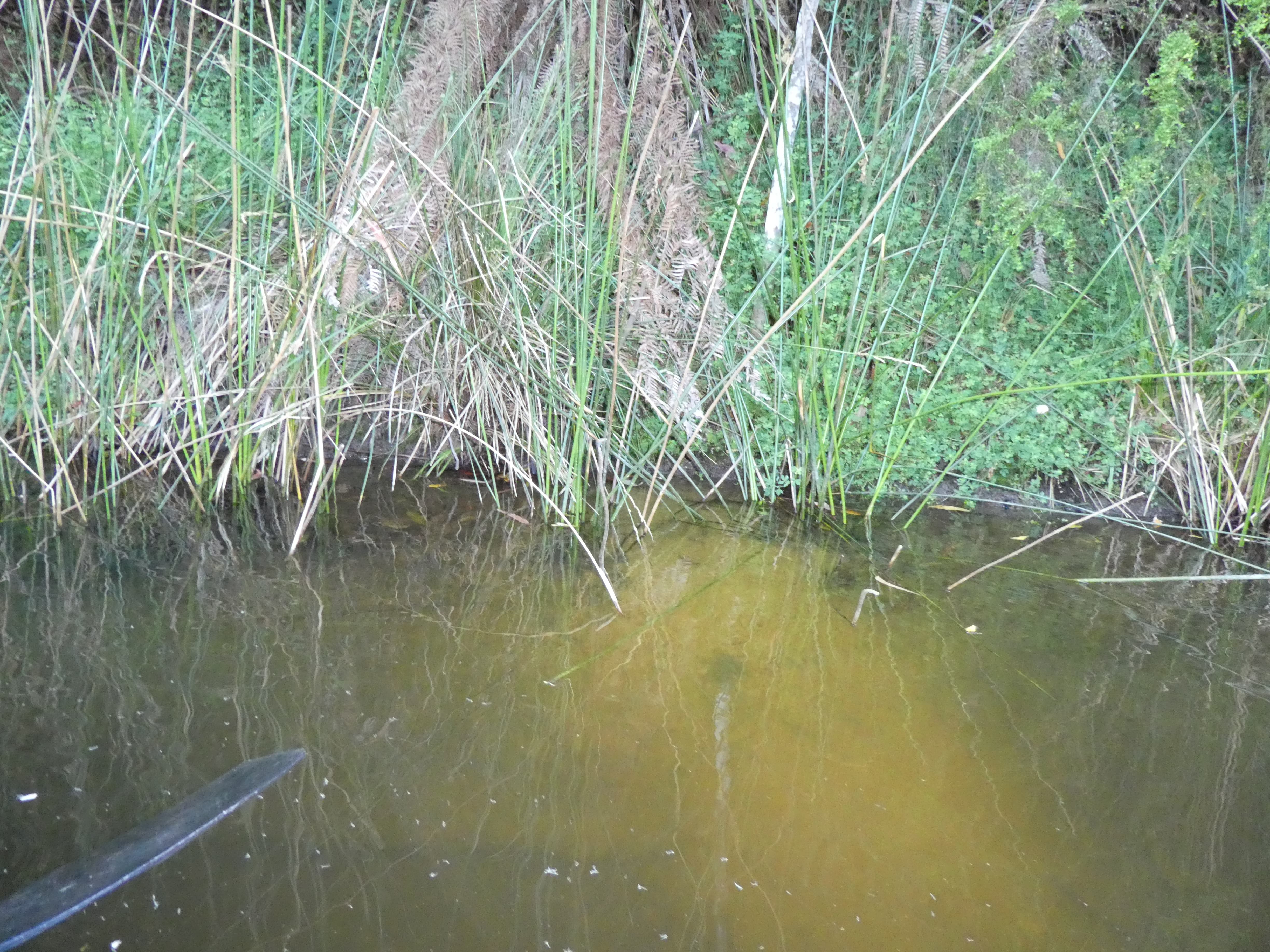 The platypus burrow in the bank of the lake.

At 8.15pm we inched along the waters edge to where he had earlier shown us a burrow entrance. It was the first burrow entrance he had found in fifteen years. Clay scratched from the burrow had left a pale runway out into the water. As we peered down a platypus shot from the burrow directly under the canoe, I was sure Bruce had some form of rabbit on a rope. We turned to see Bruce with his first big grin for the night, “yep bang on 8.18pm, just like last night” he exclaimed. We all laughed more so because Bruce was talking like it was the last train out of Geelong more than the movements of a very weirdly built marsupial. We headed back towards the mooring buzzing with delight at the two hours of magic in this very tranquil setting.
Canoe empty we looked out onto the now dark lake. Only now did Bruce proudly confirm that no-one had ever fallen in and as a side comment, nor had he. I think he tells people after to avoid clients taking it on as some sort of challenge. We started our walk back to the car concerned at the possibility of stumbling in the quickly fading light. Within minutes our eyes became accustomed to the dark and we walked confidently along the track. My mind was racing I was still caught in the magic of the place when Bruce stopped and pointed to the side of the track, hundreds of glow worms sparkled like distant city lights. I could see Kylie and Bruce’s teeth in the gloom as they smiled and then we trudged on, the glow worms kindly directing us back to the carpark.
Back in Forrest Bruce pulled into the empty brewery carpark waved his arm out the window in a final farewell and left us to find our way back towards civilisation. What an adventure, what a hidden gem of a place is Lake Elizabeth.
Give life a slap, Jeff