|  No Comments
I was in India one minute and an hour later on the ground in Sri Lanka. Such is the speed of moving about. It was faster than going into the city by train at home. 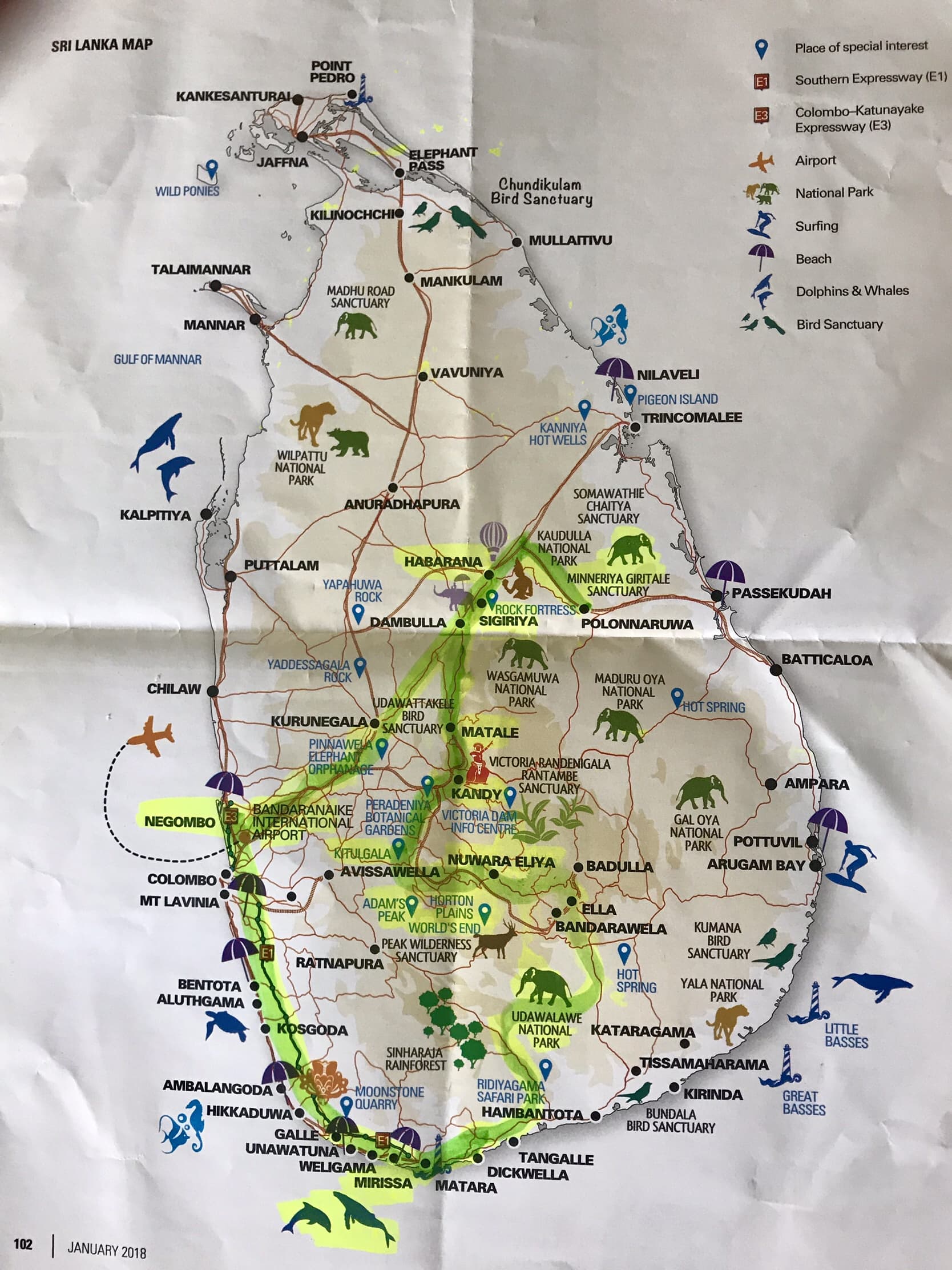 The route around Sri Lanka.
The tour was organised with Menaka @ off2srilanka
A smiling driver was waiting at the airport. Kylie had flown in a few days earlier and she and the driver were keen to head up country, to Habarane, elephant country. We visit the local relics at Polonnaruwa on creaky old push bikes. We drive out to a local river village where we are paddled across a narrow river by an elder to meet the locals. They are growing everything and using basic implements to cook it all in a mud hut whose walls are stained with smoke from kerosine lamps. Their deft use of tools is impressive, they husk a coconut and rasp the coconut flesh into a bowl in less time than it would take me to get the magimix out of the cupboard.
I found myself on my third safari in three weeks but I wasn’t complaining. Simply another chance to be bounced around on rutted bumpy tracks, to be covered in splattered insects and charged by an overprotective female elephant. I felt quite privileged to be watching great herds of elephants quietly tearing great clumps of grass from the vast plains in a never-ending feeding frenzy. Occasionally they would tap a grassy clump onto their raised foot shedding unwanted soil before lifting it into their open twenty-four hour mouths. 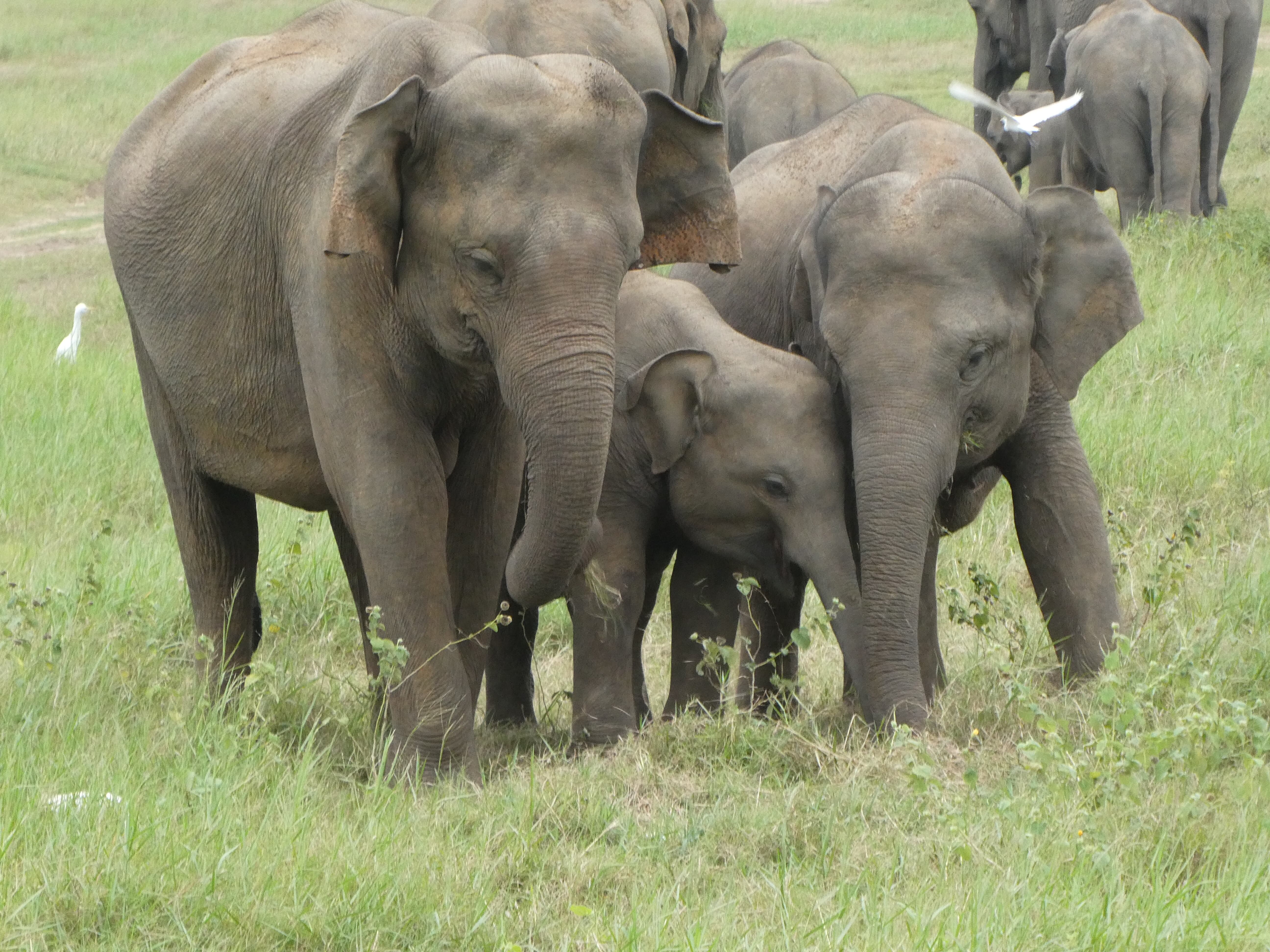 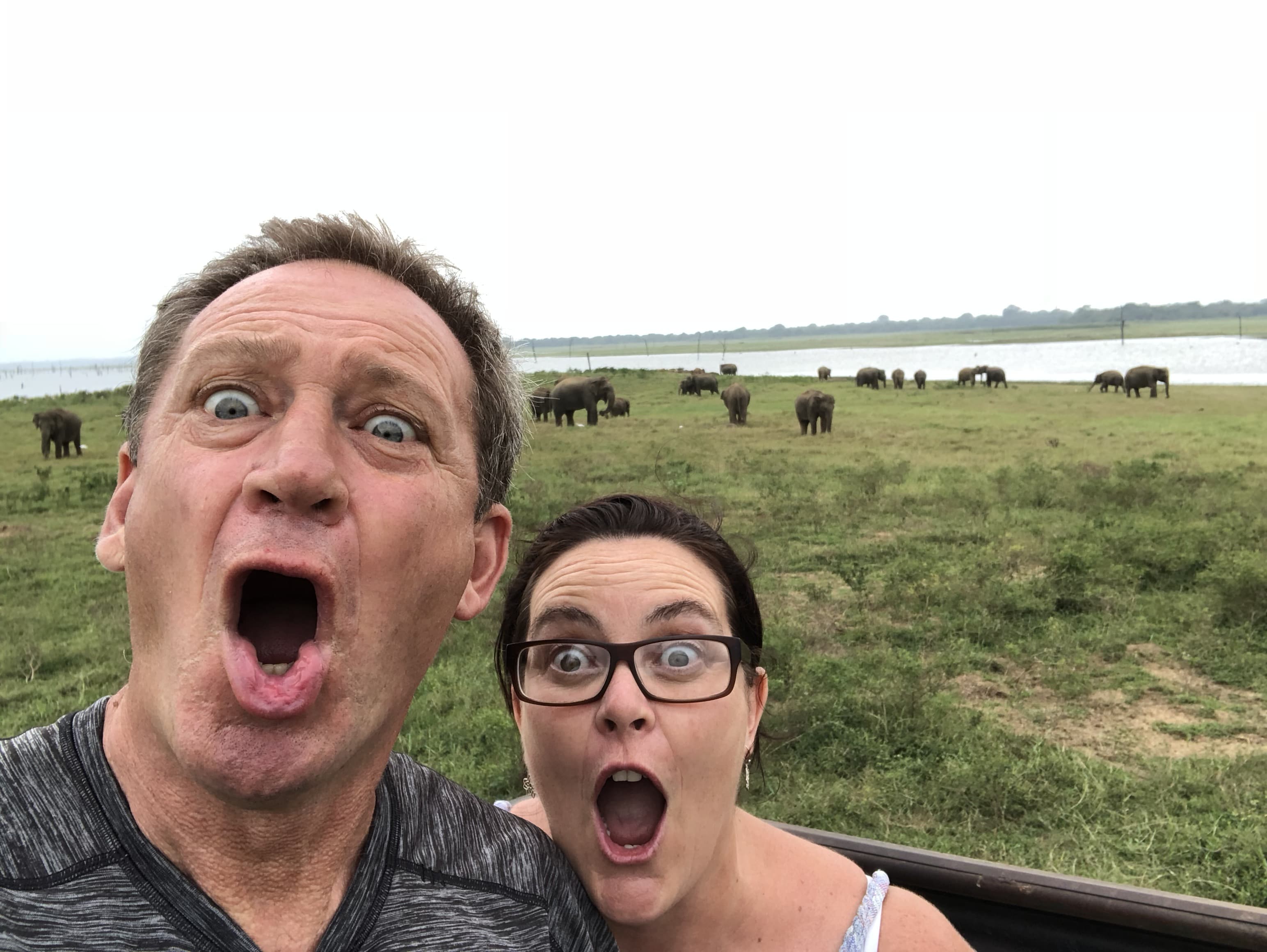 Shocked by the numbers of elephants…

From our rather swank hotel Aliya you can see Sigiriya, the lions rock and a  monastery perched high on the summit. Of course it needs climbing it was that or lay around the pool which was calling my name. The path up is a mixture of stone steps and narrow steel walkways bolted precariously into the face of the sheer rock. The serenity at the top makes it worthwhile, the view stretches out forever. Although I have this nagging thought of how I’m going to carry the weekly groceries up here. I can just make out our hotel in the distance. I’m sweating madly and start to think I should have hung about at the hotel pool. On our creturn we do get a delicious cool swim followed by a breakfast which tastes all the better whilst glancing up at the mountain we’ve just climbed. 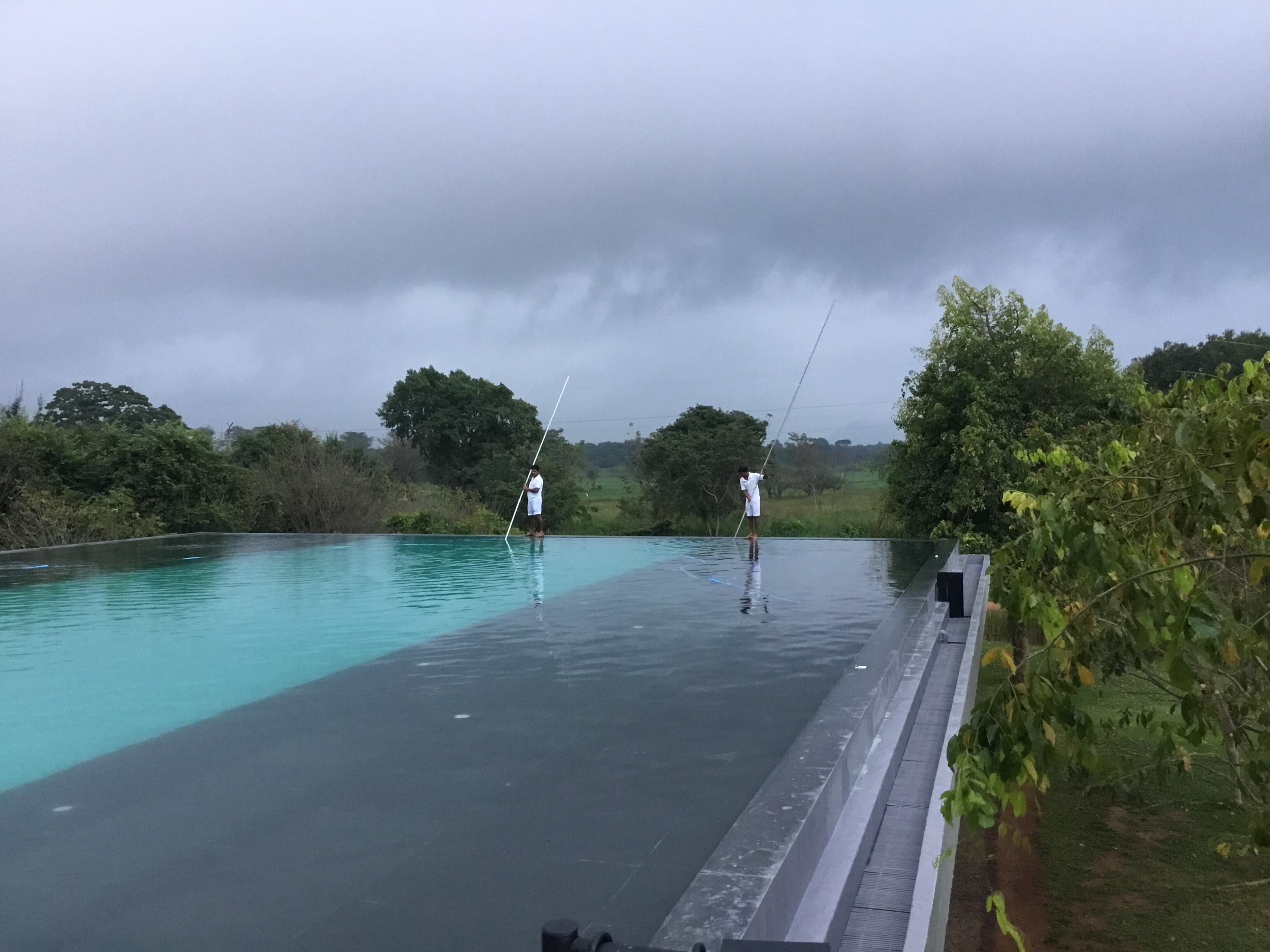 The pool boys refused to allow a single leaf to drown in their beautiful pool.

Another day another adventure.  The trip is taking on a physical theme that I had not expected. We drive towards Kitalgulah on a road that only gets bumpier, we are high up in the mountains now next to the river Keilani. Too many hours in the van, time to stretch the legs but white water rafting ? Should have read my itinerary more carefully considering I had agreed and paid for it. A life-vest is strapped around me, jerked tight. Tight enough to know it’s not just for show then we are both pointed down a steep narrow cliff track to the roaring river below. The rafting office sends our rubber raft suspended precariously on a thick cable. We watch as it glides high above the trees and scrub like an oversized pelican right where we are standing waiting at the river edge. Two skinny local boys appear from nowhere and gesture for us to step in. What follows is five minutes of fundamental paddling and survival instruction. “Ok ?” asks the older guide, he pushes off before either of us can answer. 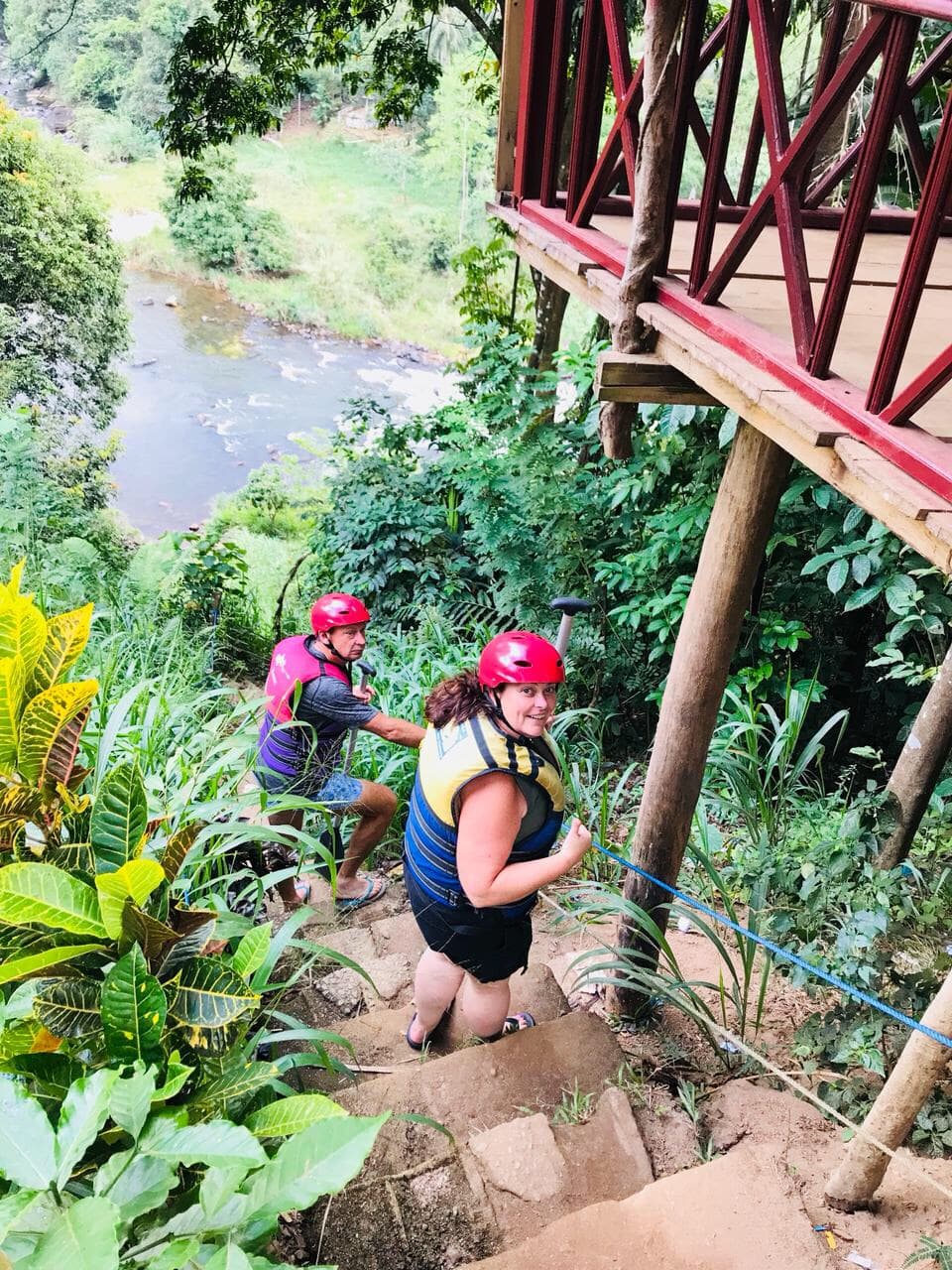 Kylie is all smiles BEFORE the white water rafting.

Far too quickly we are being bucked and jostled like first time rodeo riders, I’ve forgotten how brutally unforgiving water can be. The second set of rapids finds Kylie being tossed like a cork out of the raft. The lazy smile disappears instantly from our two guides and in seconds they have scrambled like ants across the raft and reach overboard. With an almighty tug they have somehow reefed her back into the boat. They have no time to speak or smile we have reached the next roaring rapid and we need to negotiate the boulders. There is a flurry of oars thrashing into the churning water, a call to relax then tense fingers clinging to the raft’s ropes. It’s not until we reach a calm stretch that they turn and smile, laughing and talking rapidly in their local tongue. For two scrawny boys they found adrenalin energy when they needed to. We swim the last stretch of this dark wild river as the sun starts to go down, it’s blissful. Not for much longer though, currently the Chinese are constructing a massive dam for hydro electricity the river will become a trickle. The riverside villages will be gone in two years so will the rafting business. We wave goodbye in sudden torrential rain but we’re wet already. Asiri, our driver struggles to get the van up the slippery flooded road from the river. It’s on our fourth attempt that he finally gets traction and we lurch back onto the narrow mountain road.

We arrive late at Slightly Chilled hotel perched as you would expect, on the side of a steep mountain. The hotel dining room is full of Europeans enthusiastically shovelling in dinner whilst silently staring out the window at the distant sparsely lit path leading all the way to the top of Adams Peak. Almost straight to bed for us it’s a real early start.
Woke at 2am willing the rain of last night to have disappeared. I’ve obviously been praying to the right god because the sky was full of stars and an enormous super blue moon. Half an hour later we were stumbling along the hotel road with two choices. The European backpackers heading off to claim the summit of Adams Peak and the local pilgrims quietly snaking their way towards the Buddhist shrine at the top of Sri Pada mountain for prayer. Oh that’s right, they are one and the same but the attitude couldn’t be further apart. We creep past tea houses already billowing great clouds of steam and gaudy souvenir shops full of fluorescent cuddly things with absolutely no connection to the spiritual mountain top above.
The first thing that causes concern is the irregularity of the steps, not such an issue for me but Kylie can barely see over and needs to lift her knees to her chin to scrabble up. The steep size means it’s also difficult to get a rhythm up, that plus the thought of clambering up five thousand five hundred of the buggers. It chews at your brain. Around us a mixed bag of young locals skip mindlessly along, older worshippers chug along like those diesel engines that just keep going and the backpackers who have started strong are already slowing and thinking of somewhere more interesting to be.
The first hour slips away and the second hour has some stops. By the third hour there are many stops disguised as admiring the surrounding landscape as night turns to day. At six am and with the first of the sun throwing oranges and reds across the horizon we wheeze our way to the temple gates. The sprightly and true believers have beaten us up to the small monastery. So it’s the stairs for us as chanting rings out into the dawn. We sit and watch the full sunrise whilst contemplating the effect that those five and a half thousand steps will have on our knees going down. It’s slow and steady wins the race, there is a certain satisfaction though in arriving back at our hotel in one piece and before they’ve packed up the breakfast room. 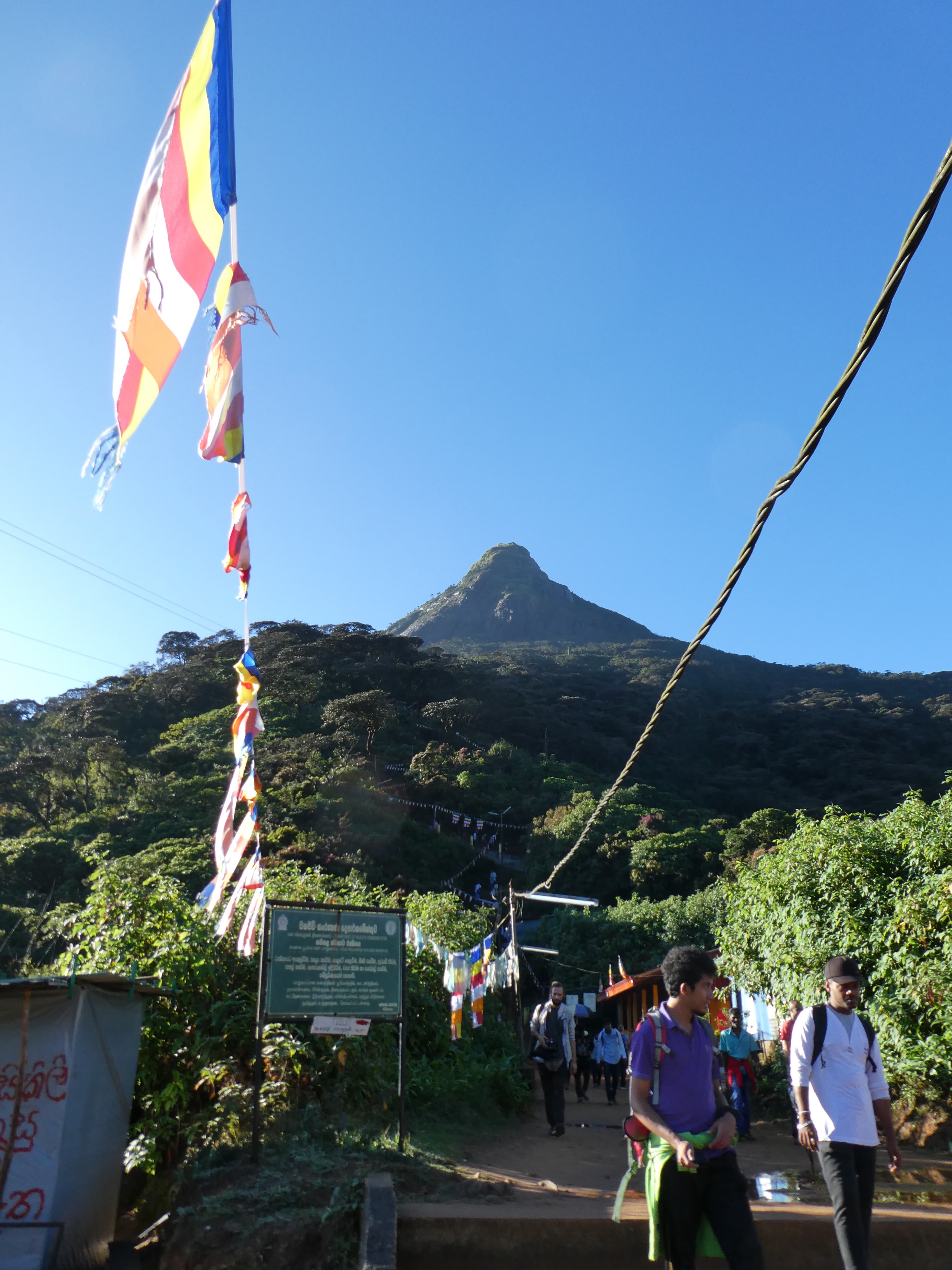 The path to Adams Peak. Somehow every religion believes it to be theirs.

Back in the van to slowly bounce our way to Nuwara Eliya on roads that have equal potholes and bitumen. We are thrown about and sway in unison on the hairpin bends, the valleys are deep and rugged. Sri Lanka is far more mountainous than I had realised.
Tea plantations start to appear clinging precariously to these steep hills and the temperature starts to drop. Finally Nuwara Eliya, a hilltop retreat for the colonial English is laid out in front of us. Old England they called it with a sprinkling of remnants of the British rule. Our hotel is of that era and is both quaint and in desperate need of some twenty-first century power points. It certainly has a retreat feel and we sip drinks in the old dark timber lined bar whilst discussing tomorrow’s elephant shoot. The elephant shoot is canceled due to lack of interest or maybe I missed the early start. Instead we follow a million Chinese tourists each with a selfie stick around Horton Plains to the magnificent vista called Worlds End. The tranquility and beauty are lost on the platform jutting out into the valley maybe it’s the non stop chatter of the Chinese hoards. China’s equivalent of Facebook, RenRen must be in overdrive. 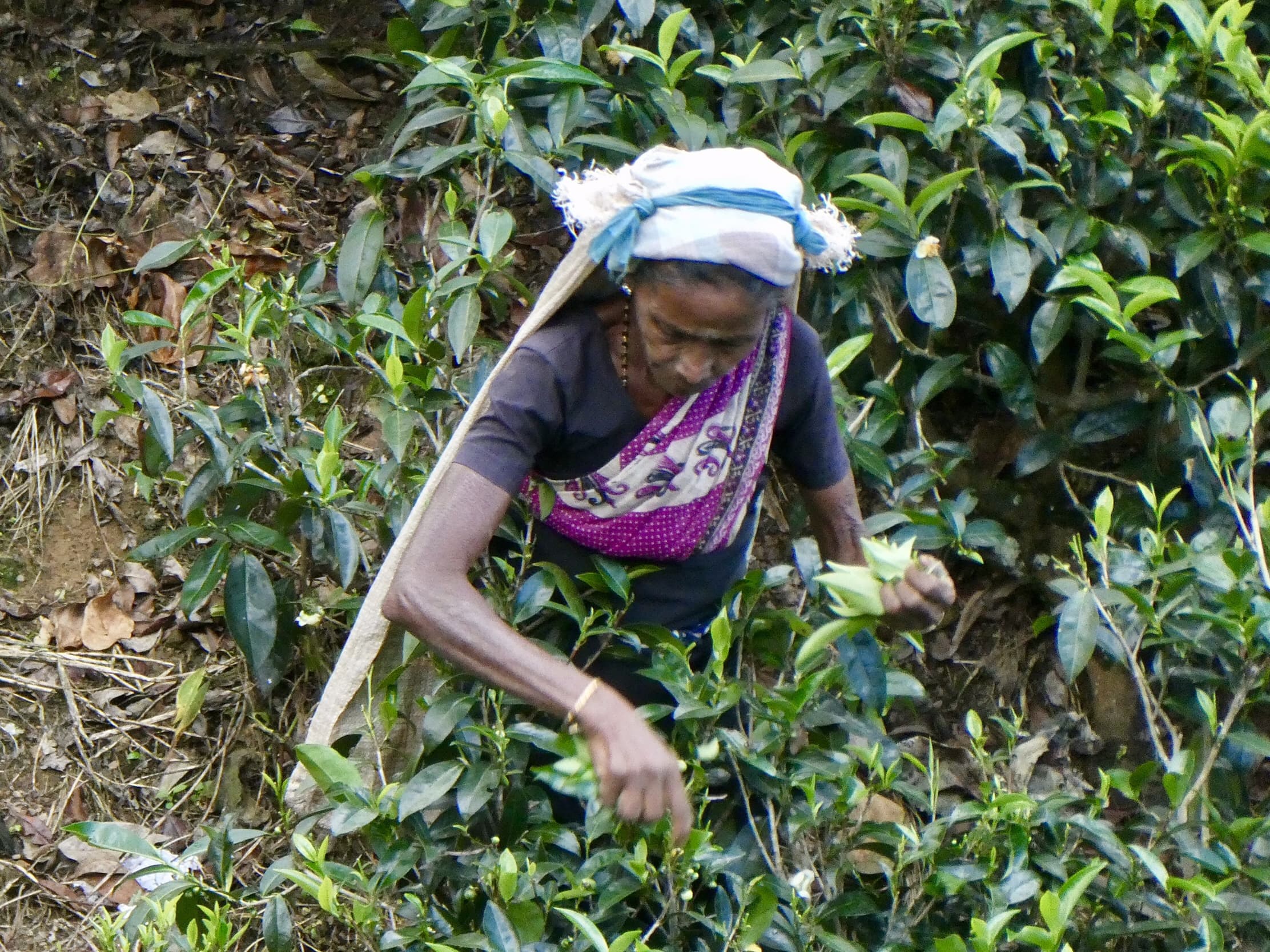 Our route down to the coast to Mirissa is broken with a ride on the English built railway which winds its way along the ridge-line slowly descending to Ella. As our train pulls in bright-eyed European backpackers spill off the train to what has become a bit of a hippie trail. At cheap bars and local roti stalls they lounge about smoking hand rolled cigarettes, wearing loose cheesecloth elephant pants and showing off their newly applied cosmic zodiac henna tattoos. Wow man…
We get into our car without inhaling. Our driver Asiri has a family issue and has found his own replacement. Not a good move. This random guy tries his best to scare us to death. Four hours and regular backseat braking as he misjudges every situation before finally braking so hard we jerk forward. We tell him to slow down, it falls on deaf ears. I’m livid when we arrive at the beach and ring the tour owner. It’s our only complaint in ten days of an otherwise terrific tour.
It’s paradise at Mirissa with coconut palms swaying in the afternoon breeze but the secret’s already out. There are few English speakers here, the tourists are predominately Europeans working on their winter tans under the coconut trees and regularly being dumped trying to body surf in the warm ocean waters. Our last excursion is into Galle where we walk the fort rampart checking out the fortification of this old Dutch colony of the 16th century.
A pre-dawn whale watching cruise is more chilled and we are lucky enough to see five blue whales. They are massive animals spurting great plumes of water prior to diving deep for food. The cruise sign says they are forty times the size of an elephant and yes they often leave a calling card like an oil slick on the ocean’s surface before they dive. 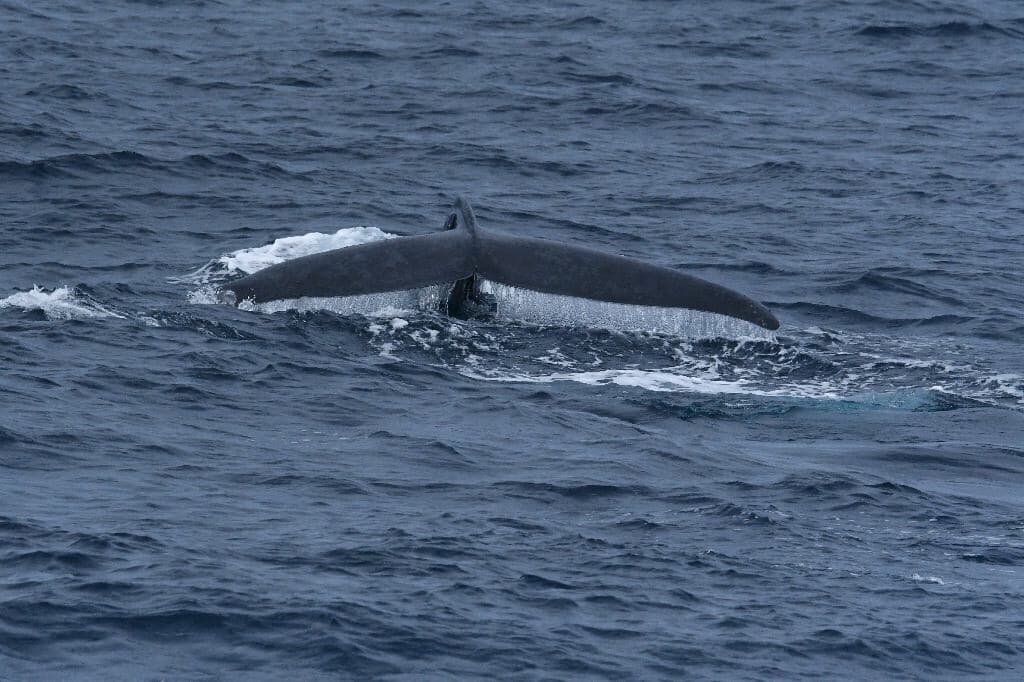 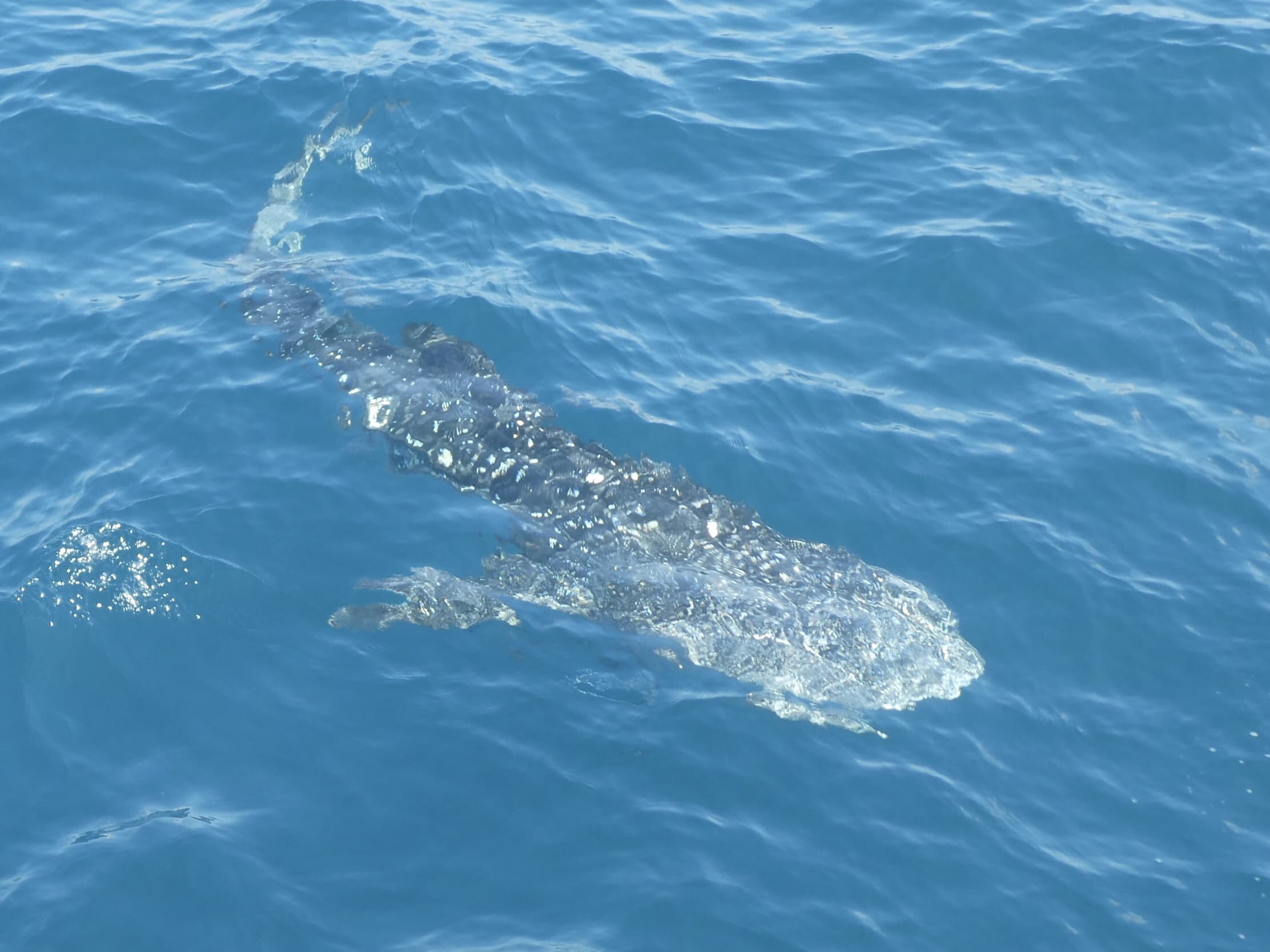 We also spot three whale sharks which are as curious of us as we are of them. The highlight for me though is the deckhand who after planting his thongs firmly on the deck sways like a pendulum clock in the deep swell forcing some downstairs to feed the fish. Time to kick back on the beach and relax now before heading home.
I’ve heard of Sri Lanka described as Serendip, we know it as Serendipity…. the aptitude for making desirable discoveries by accident. Pretty much sums this place up.