It’s a small window of opportunity, weather wise, to visit The South Island of New Zealand and when Jetstar commenced direct flights from Melbourne I took notice. I grabbed a flight before I’d actually planned what I wanted to do. Plans find their way of forming around the glimmer of an idea. This was no different, of course I packed my bike and not much else.
The trouble with cheap flights is they are cheap for a reason, $200 bucks return meant the flight left after midnight dropping me at Wellington airport at 6am and hours before any reasonable hotel will let you lay your head down. Wandered the streets, checking out a waking city, revellers who have lost their sparkle and their way. Window washers who avoided eye contact and garbos cleaning and washing the city for another day.

Wellington is a city but is also not far off being a country town as well. Three streets deep of city highrise, then a band of timber houses creeping up the nearby steep hills till they peter out into forest. I was punch drunk with delirium when the hotel gave me a key at 11am and I slept away a couple of hours. The afternoon was spent at Te Papa, the National museum my second visit and again memorable in its inventive presentation of stuff. Their world war 1 display organised by Peter Jackson producer of the Lord of the Rings trilogy was spellbinding. He is a real N.Z treasure and it seems that all he touches is turns to gold.

Part of the World War 1 exhibition by peter Jackson at Te Papa.

Aboard the Inter-island ferry to Picton early the next morning, three hours to the South Island. The ship is full of backpackers and retired sorts. I met a young American soldier stationed in Japan, a bomb expert who hopes to never have a bad day at the office. An English couple in their seventies from Kent in England who pick apples in Suffolk to finance their summer holidays and keep fit. Then the ship wound its way through the narrow straits of the Marlborough Sounds and into Picton. The sun is out, the water sparkling and 110 kms to Nelson is ahead of me. It’s was 1pm when I had taken my bag off the terminal conveyor and headed off, hopeful of reaching Nelson before the sun set. 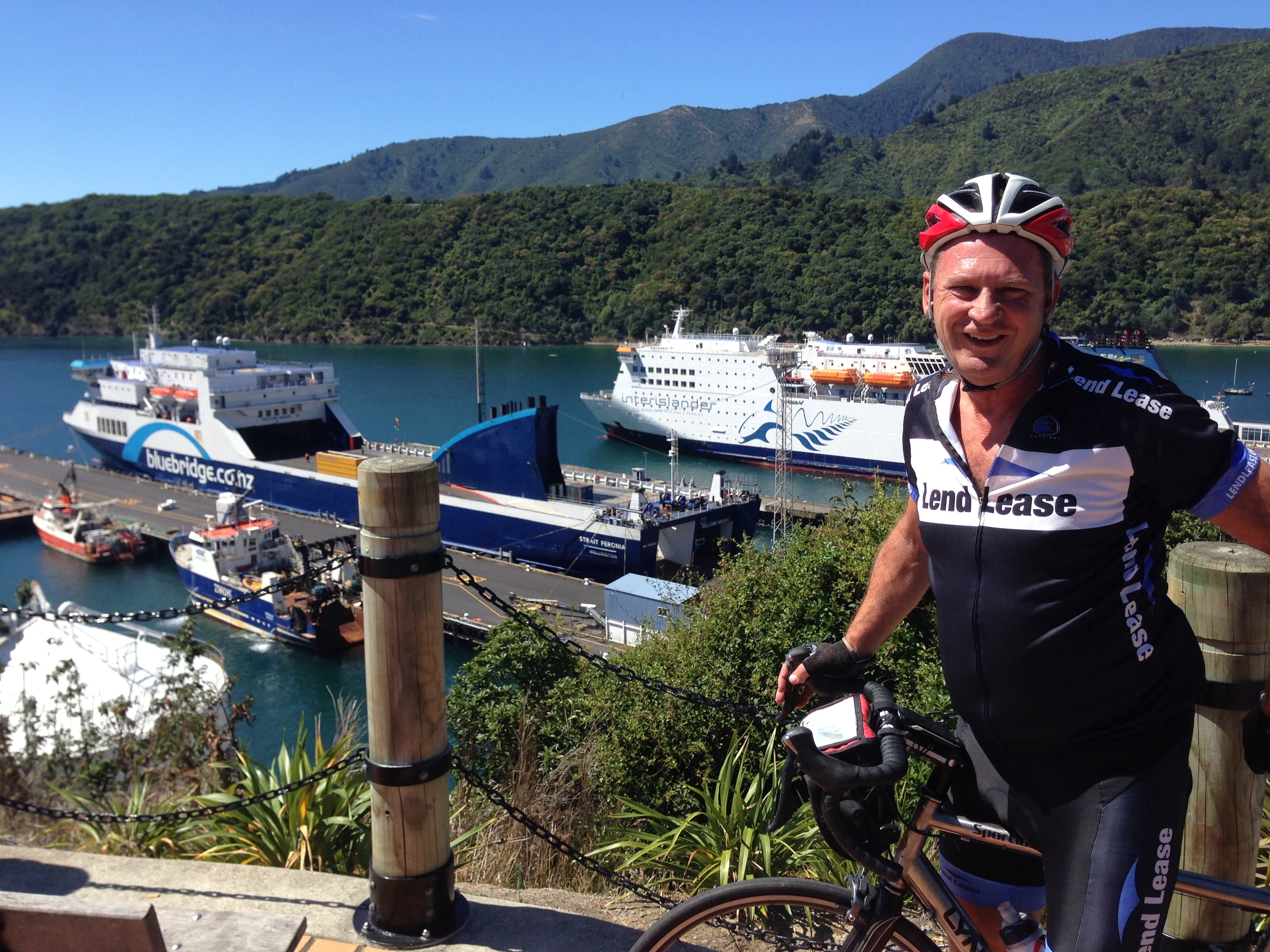 Nelson the ferry Port on the South Island

It’s hilly in the South Island and windy as well. I struggled up and down hills, got buffered by the wind and turned corners on the Queen Charlotte sounds to breathtaking views which truthfully really only gave me a chance to catch my own breathe and admire the sea and land. The hills got steeper, I got slower but finally the sun disappeared and I stopped watching my speedo turning, it was all too slow. But like all types of pain it eventually blurs over, you go numb.

Suddenly I was in Nelson looking for my motel, a shower and a meal. I was hunting for a big chicken parmiagana, I’d been hallucinating about it for the final forty kms, instead I found a cafe celebrating Paleo foods and had to settle for a double helping (I’d seen the serves through into the kitchen and demanded more) of beef cheeks and a rather bland dessert. The beer and red wine dulled my senses enough to say that was enough, it wasn’t really but I slunk off and into a deep sleep.
Day two is always hard, my body rather stiff, but a warm shower loosened me up enough to get back on the bike and head towards Kaiteriteri, the entrance to the Abel Tasman National Park. I had walked here fifteen years ago with Robyn and it is beautiful. I rode the coastal bike path which ran from Nelson to the park, along the tidal estuaries with orchards on one side and the muddy river beds waiting to be immersed with the incoming tide. Of course natural beauty doesn’t come without some scenic/steep hills and I was a lather of sweat when I arrived in Kaiteriteri around lunch time.

The afternoon was lost to staring at the sea, planning a water taxi into the park and sipping local beers at the Kaiteriteri pub.
Walking in The Abel Tasman National Park is equal to any in the world. Since Robyn and I had walked here the boats that ferry you in have become bigger, the numbers of people have increased but the unquestionable beauty of the place cannot be taken away. There’s backpackers wandering from camp to camp, there are legions of Germans outfitted for any situation and there are a handful of wild-eyed Americans who thought they’d booked New Orleans but landed in New Zealand and can’t understand a word… 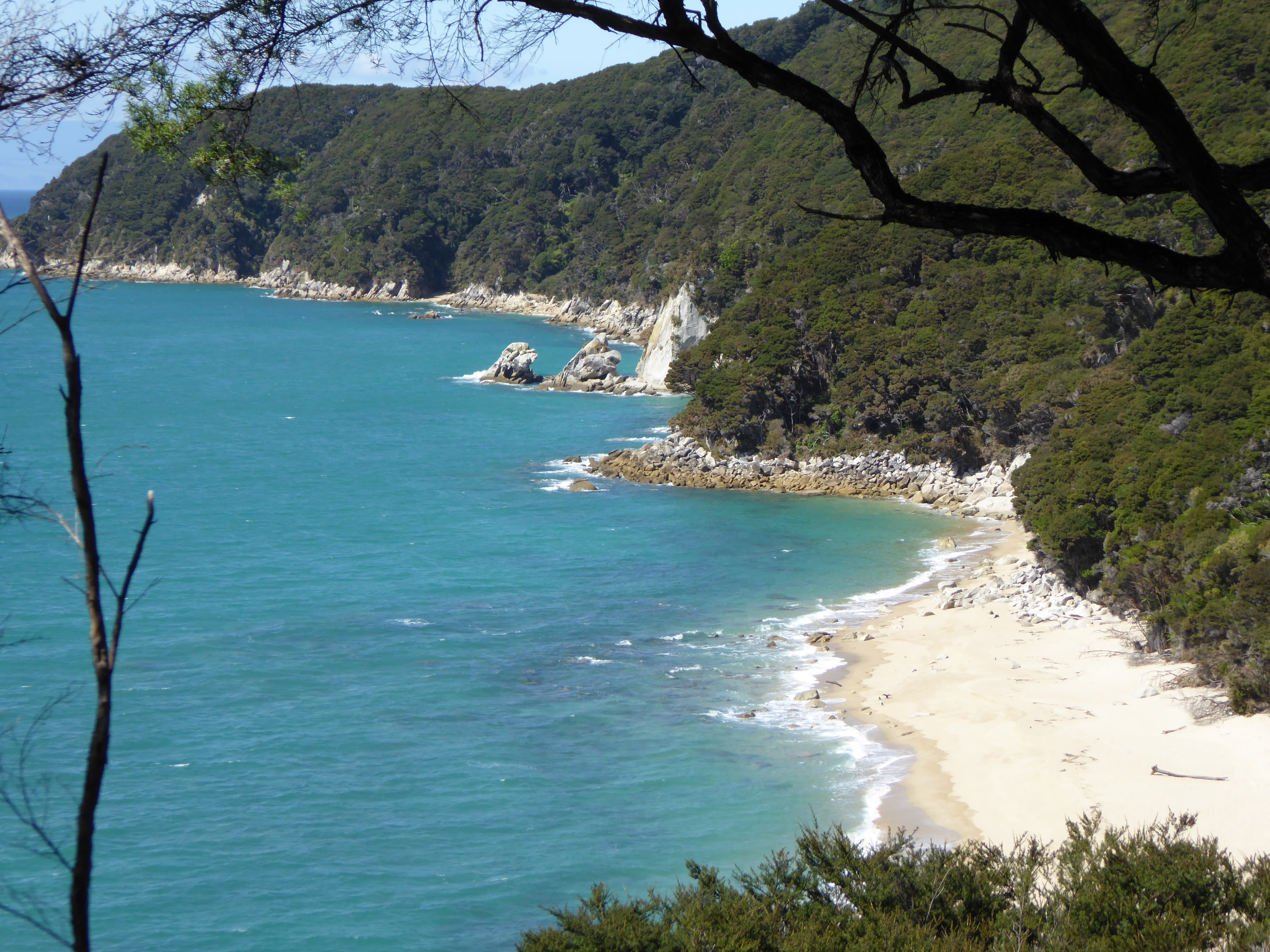 There is no more pristine beaches in the world than here. Shhhh

Everyone passes on the track with a nod, a grunt or a smile, mainly they’re smiles. One idyllic beach is connected to another just as magical but with a steep hill and a one hour slog in between. When enough is enough you go to arranged spots on the beach and await a water taxi, they can return you to civilisation and a cold beer in under two hours, bliss. Tramp for a few days mix it with some kayaking maybe some canyoning and before you know it you are looking at the world through rather clear eyes. 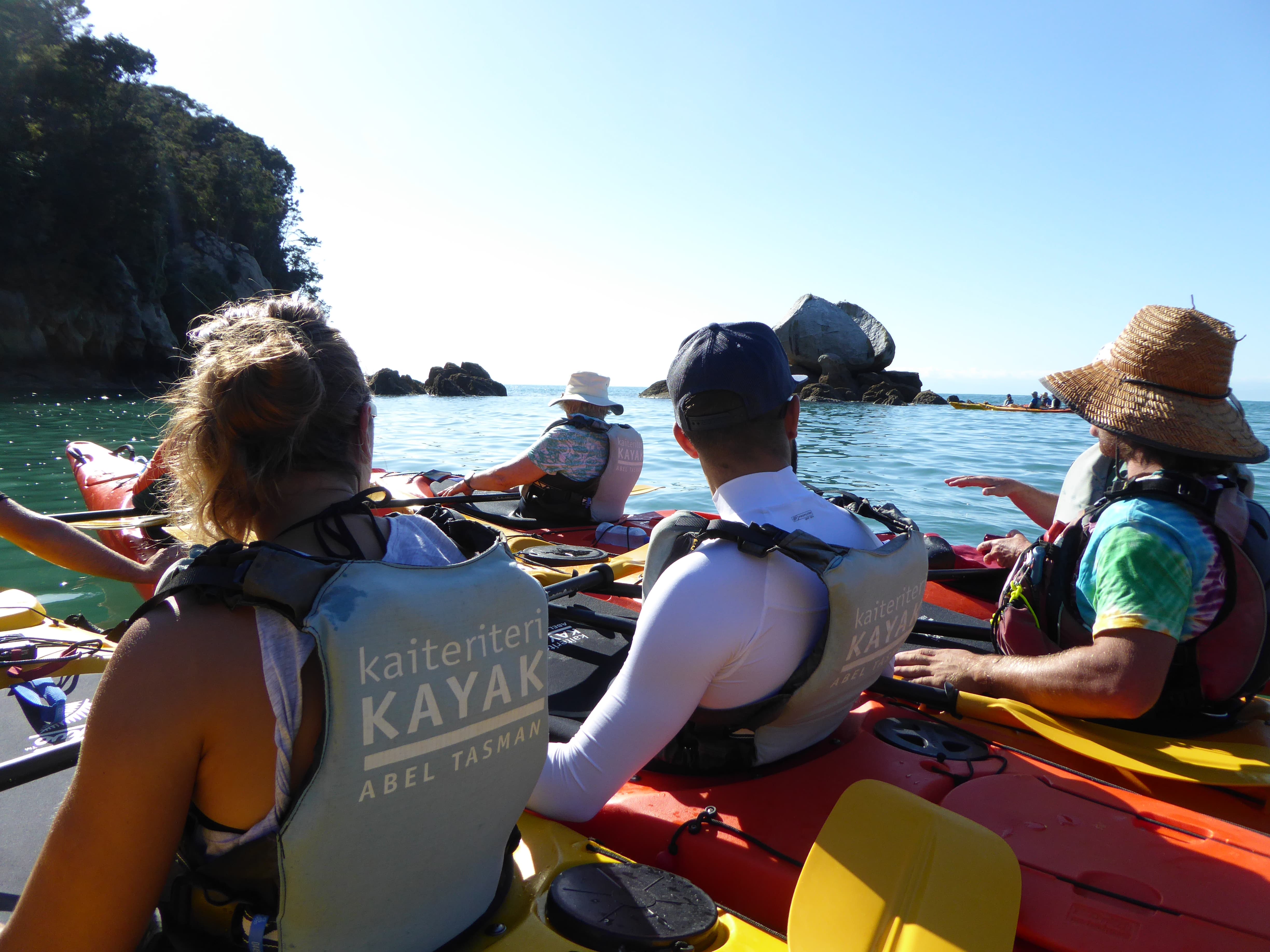 The mornings are crisp, Autumn is almost here and standing on a beach in your bathers at 8am waiting to start your kayak tour brings this home. The guides are all hippy go lucky sorts and run through their safety check like it would be a miracle if someone could fall out of these sturdy kayaks. An English couple put their hand up, we’ve capsized they announce, on the North Island. Our guide steps forward “well done” he replies in a strong Kiwi voice, was it like good ? They looked at him, bewildered and not sure if he was taking the mickey, he thought it all part of the adventure. The paddling was perfect, the sea gentle, forgiving even for the English, we reached Split rock, took some photos, had a coffee on the beach and cruised back to our start point. Many school group kayak the park with their backpacks moved to new camps by the water taxis, what an adventure it must be. 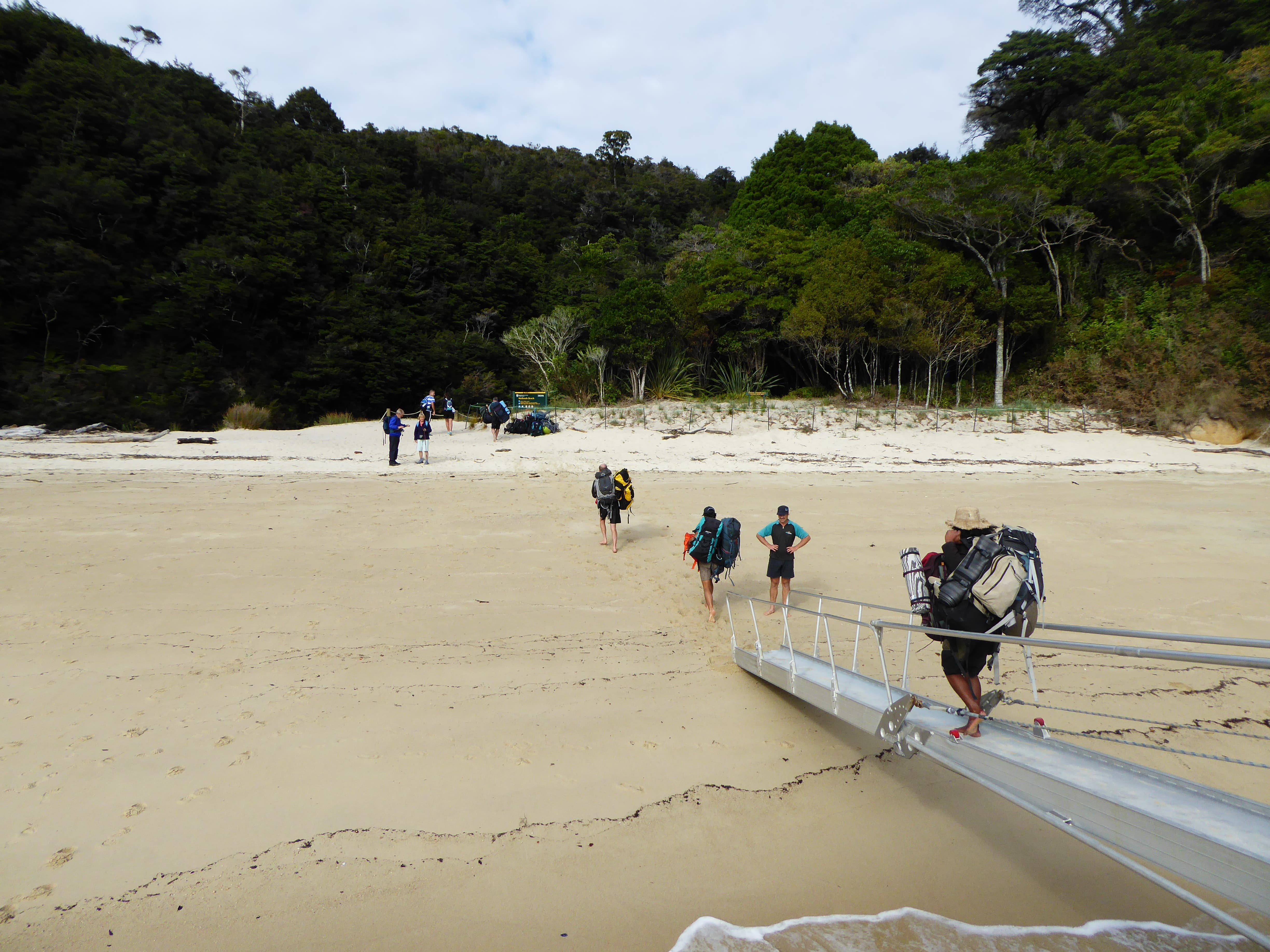 The sea taxis will drop the packs for walkers or kayakers at their next campsite, luxury !

Heading back to Wellington now, wish I could say it was full of the exotics but basically I’ve peddled and sipped on local N.Z Sauvignon Blanc which seemed so much better the further I’d ridden. Last day of riding and I chose the extended route to Picton and the ferry. Turn right and follow the Eastern coast around to Picton 70 kms. Google Earth and Strava both said it was achievable, wrong. I was thirty kms in and five kms of dirt road had me walking on a loose, unmade logging road. I was never going to make the 1.30pm boarding for the afternoon ferry, then worse, I tried to ride and my tire burst, the sharp rocks had left me with only one tube left. Two boys in a truck planning on surfing their kayaks in a nearby bay strapped my bike to their kayaks on the roof. “Couldn’t leave you out here bro” they announced in unison. They rescued me, showed me I was miles from anywhere. It took an hour in their truck to get me back to civilisation and a chance at the ferry. I’d been saved again but feel like I am using up all of my nine lives. I made the ferry with half an hour to spare even though it was a push all the way into a stiff breeze. I slumped into an armchair and let the morning adventure sink in. The scenery slipped past the boat, soon enough Wellington was on the horizon and there was only a meal and a few more drinks before an early morning flight back home. A great week and a bit of New Zealand’s best outdoors. The South Island doesn’t disappoint.