Our route around the South Australian wineries, of course its not straight….

After a winter that wouldn’t go away, I was enticed by the offer to join some Melbourne cyclists on a weeks touring of South Australia’s wine areas. Evidently the riding is quite nice but the wine is the real drawcard. So with Hurricane off to stay with my Dad I flew over to Adelaide with enough spare time to treat myself to a terrific Pizza restaurant near the city, well everything is near the city really. It is called Etica and it should be on your list if you are visiting the city of churches any time soon. 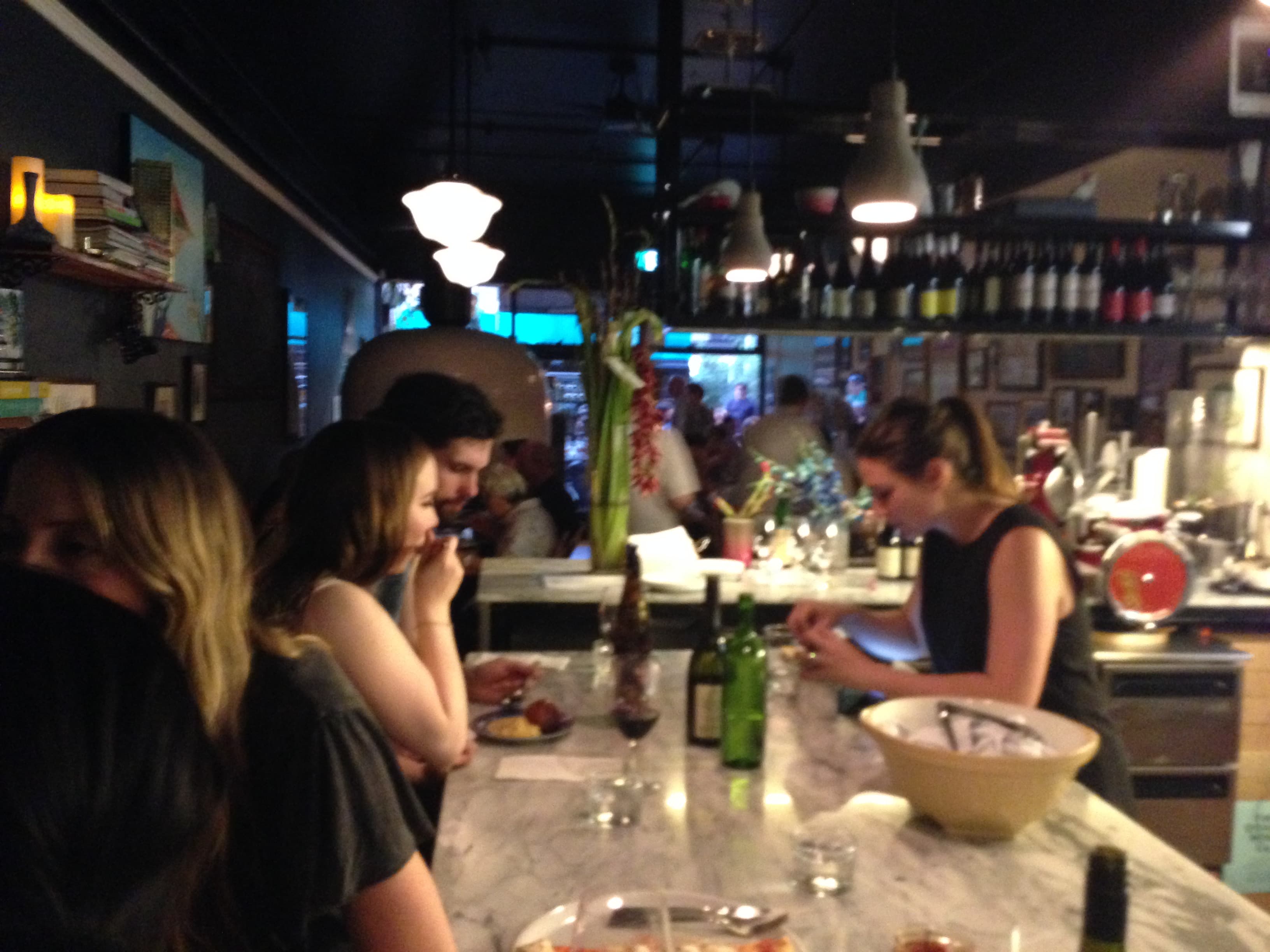 On Friday I rode down to Glenelg and along the coast to be greeted by sparkling turquoise water and bright sunshine. How much better/ younger do you feel with the sun tingling your skin. The day was almost ruined by an old seasoned magpie who took great delight in swooping and getting his beak under my helmet, the bastard drew blood from just above my ear. I don’t think I was his first victim as there was a sign attached to a nearby fence. In the old days they’d shoot them, I may return…. 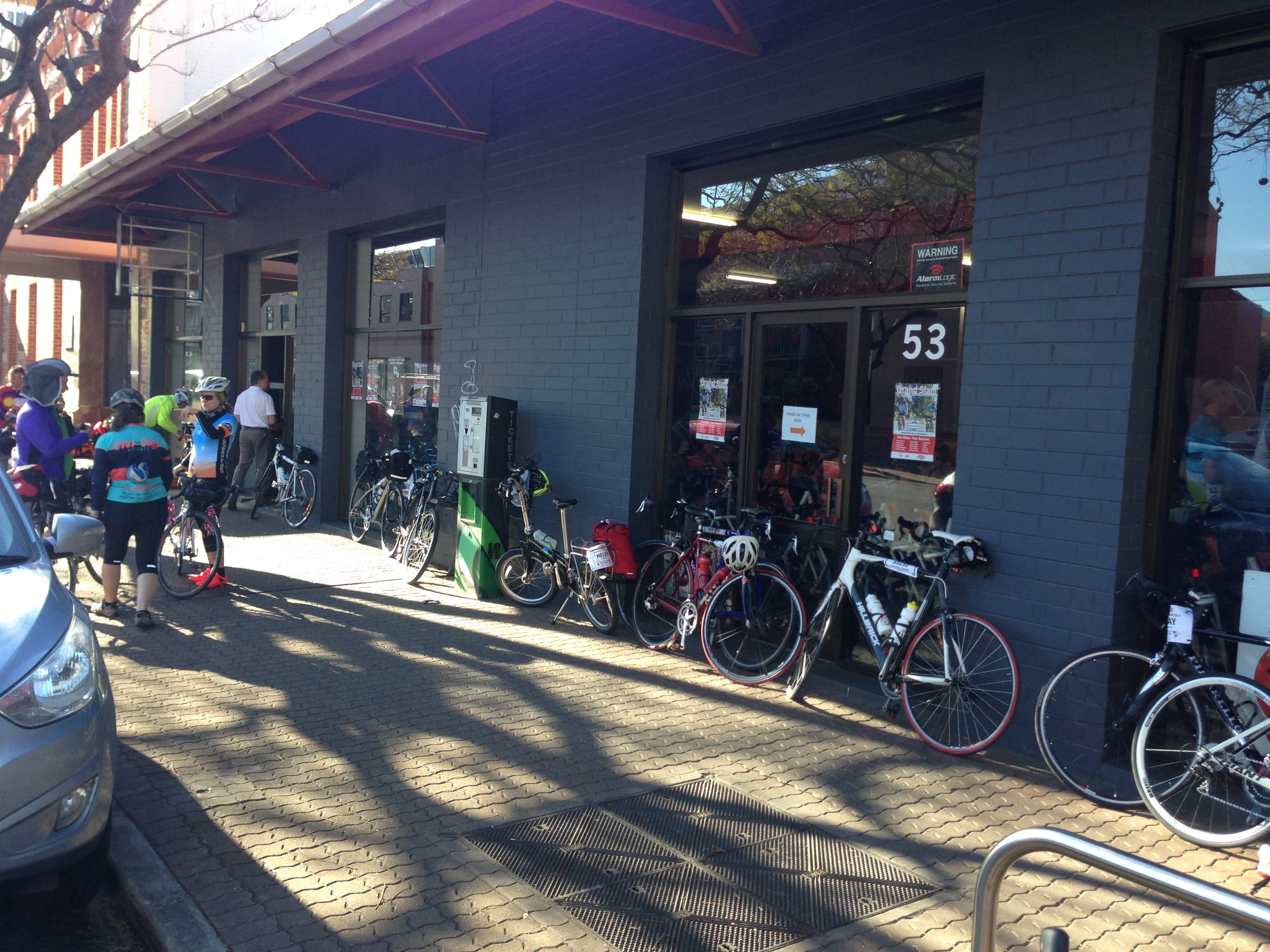 BikeSA office and our starting point.

Saturday morning an eager if rather elderly ( “do I look as old as them ?” I heard someone whisper ) group of 200 cyclists congregated at BikeSA’s office to throw their bags and tent bags into a rather large truck and began peddling single file away from civilisation along the Torrens river. We are to ride 600 kms over a week.

It was tranquil riding and the chatter echoed along the gully, it all stopped when we reached the first climbs out through the Adelaide hills. By mid afternoon we were at our first campsite but not before stopping off to sample some of the local produce of the area. There were the normal couple complaining about how hard it had been then saying that they hadn’t done any training. Paying is one thing being prepared is another and if they are hurting on day one they will be regretting having come by day nine…. An early dinner, plenty of clean country air and a full day cycling had many slinking off to their tents early.

Of the 200 only about 30 are from South Australia, it’s not what I was expecting, they have come from every state and a few from America. It is the perfect showcase of S.A. It’s Spring, the fields are green, the skies blue and it’s not yet too stinking hot in a part of the country that bakes in mid summer. Day two was my downfall, Yulumba winery was the first to entice me, a gazebo umbrella, a crisp white wine and two-thirds of the ride under my belt, so what if it wasn’t mid-day ! Tut… On arriving at our campground for the night, the oval at Chateau Tanunda I managed to pitch my tent. I was then forced kicking and screaming to ride an extra six kms to Penfolds winery where the tasting fee had been wavered for our group and there was the chance to taste Grange, the holy grail of Australian wines. Fifty bucks for half a glass but then again a bottle retails for $750 !!!! The whole experience was worth the fifty and we took a little longer to weave our way back for dinner and more wine, hick. 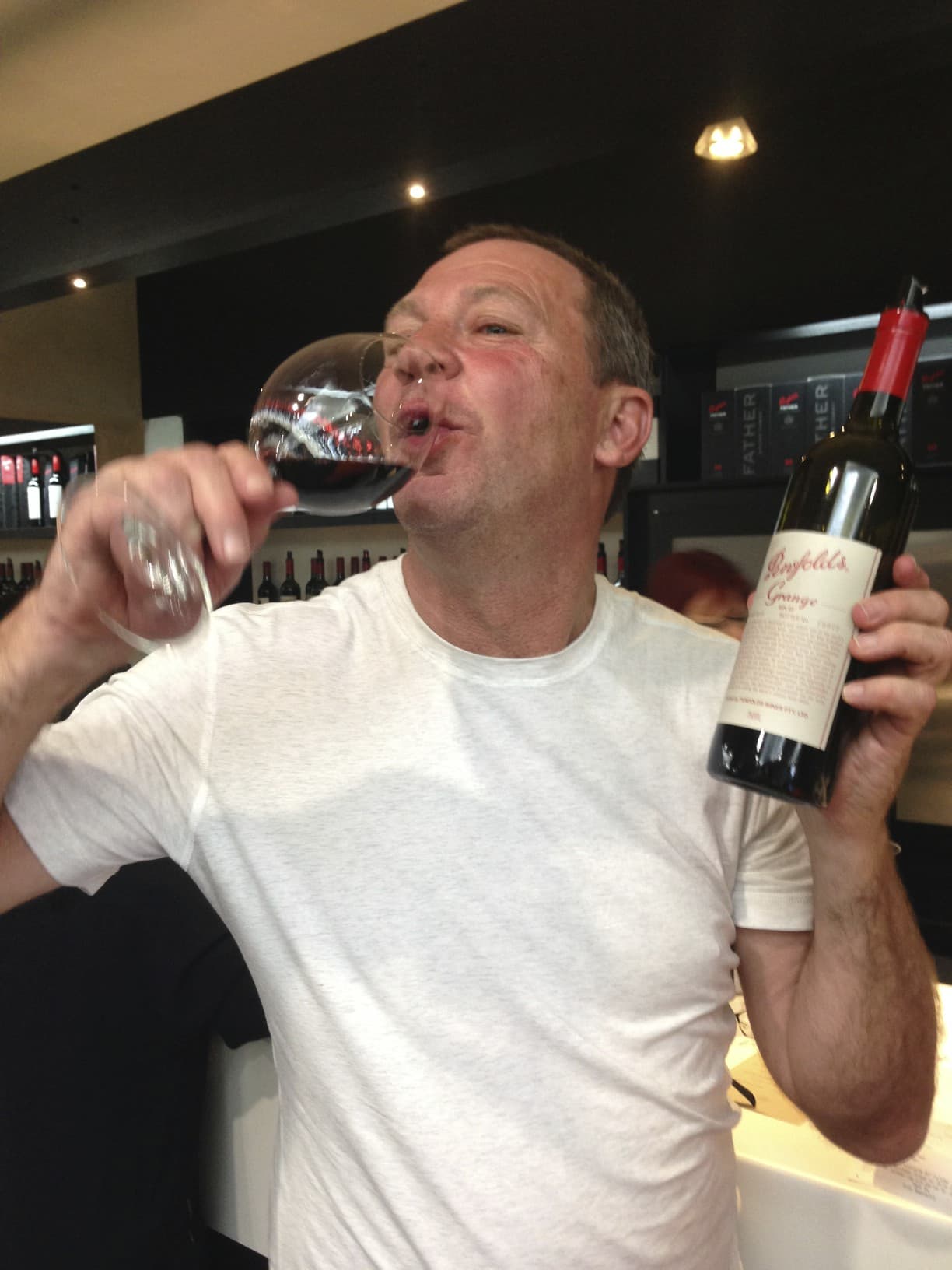 By day three everyone is in the groove or trying to hail a taxi back to Adelaide airport. The hills have flattened off and the leg muscles are building. We are spending more time admiring the scenery and stopping at every sign of life as the towns are generally tiny, quaint and empty. The stand out in the bigger towns are the beautiful stone buildings constructed of local material and looking very regal and sturdy in this hot, harsh environment. They are almost a contradiction, standing there defiantly in the shimmering heat.
We are currently in the Clare Valley, tomorrow we start the Riesling trail and our rest day. I have abandoned the tent for two nights for a soft comfy bed at a motel. My only risk is tomorrow’s tasting tour, it could end up more the trail of destruction or should that be distraction, than the Riesling trail. I wander into town to find my own dinner, anything but chicken, somehow it’s been my daily staple and I desperately need a change? 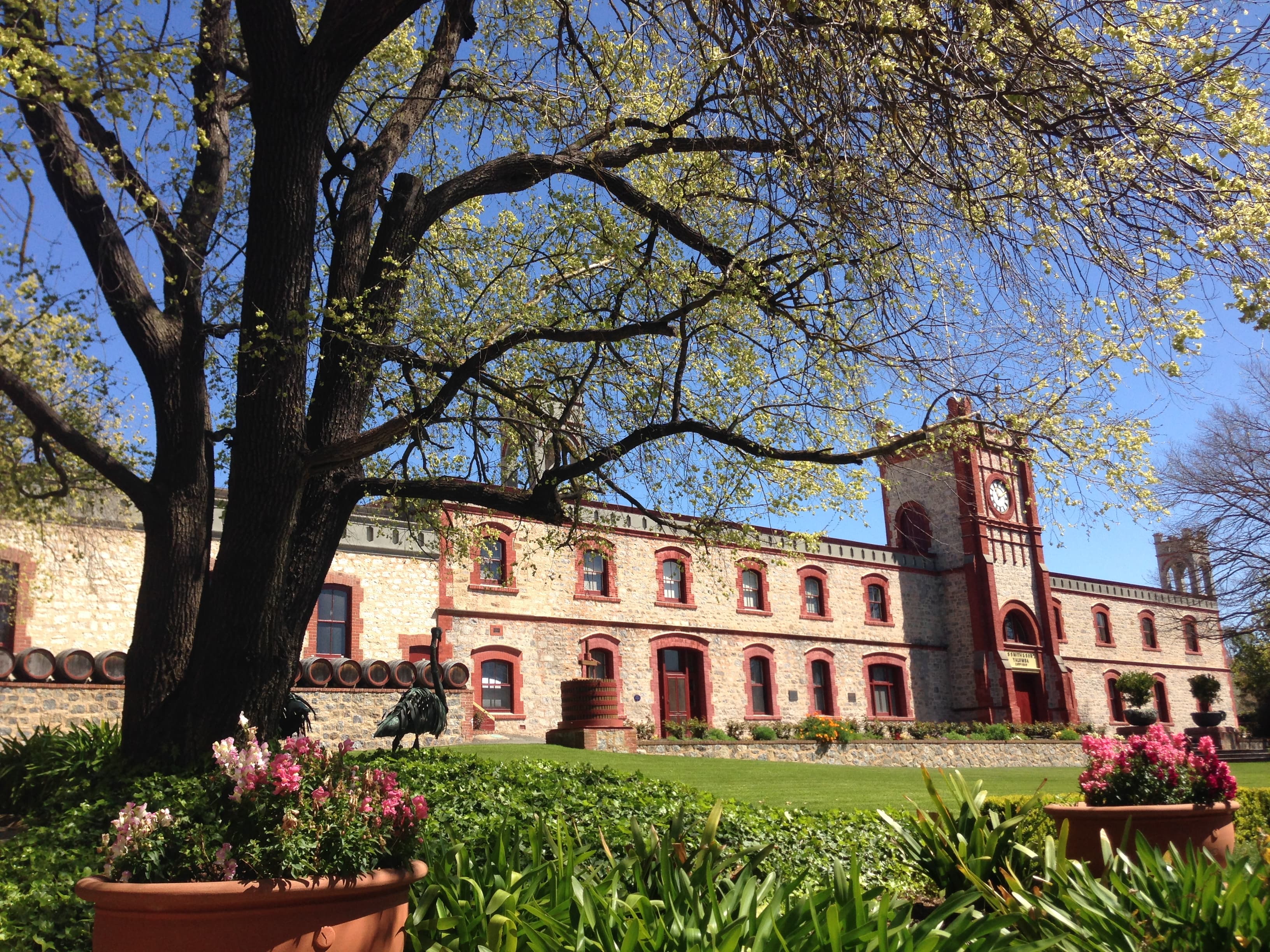 The stone buildings of the original wineries stand for another time.

The days have blended into one another, a queue for cereal, a queue for toast and no queue for dirt coffee. The riding has us all ravenous and even at breakfast all we can think of is feeding the engine. Thirty kms down the road we stop again, every day, and load in more, real coffee, two pieces of fruitcake and a gulp of water. The cycle trails have been terrific, well cared for and showcasing the wine regions Often there is an enticing cellar door calling our names ! The combo of eighty plus kms and a flight of ports late afternoon has some sitting at the dinner table looking like they are deep in prayer, their heads bowed low. The call of some sticky dessert usually brings them to, just long enough to gulp the sugary treat down before racing back to their tent for some well-earned sleep.
Each day the group has left earlier either due to getting better at packing, not forgetting their cereal bowl for breakfast or the real reason paranoia……that they will flag before the finish of the days ride. The temperatures have slowly crept up and will nudge thirty plus by Saturday. Today we all shuffled around Handorf, a tourist town loaded with beer and sausage shops and the occasional trinket market. Many of our group were seen drinking tall steins of weisenbeer when really they should have been rehydrating…ha. 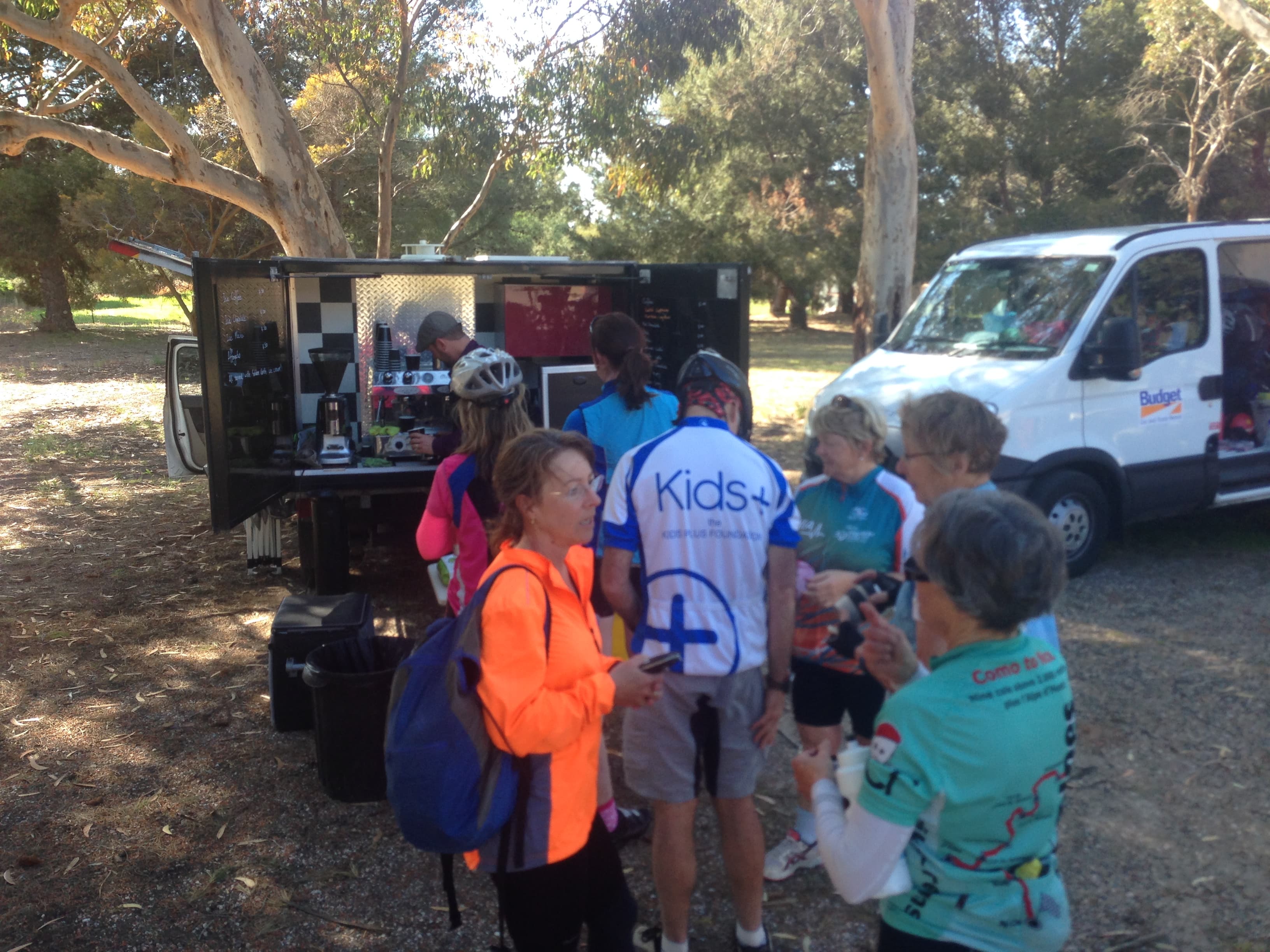 I only cycle for the coffee… the roving coffee truck.

There is much organising of two hundred riders, a full-time cycle mechanic, a roving coffee truck, luggage trucks, a team of masseurs, a lady who simply does morning tea, cutting blocks of light and dark fruitcake and boiling pots of tea. But the best vounteer has to be the guy of resplendent greying pony tail and high riding trousers whose main job appears to be to managing the table service, ensuring no-one starts queuing till he waves his hand. A volunteer who takes his daily few minutes of power very seriously and you rise early from your chair at your peril. Generally the food has been more than fit for human consumption !
The last two days are in the South on the coast at McLarenvale, an area I have visited a few times to watch the Tour Down Under. With a howling North wind both helping then hindering we swept into the town around lunchtime Saturday all keen to shower and watch the AFL grand final. With the tents being buffeted by the strong wind and the only shade an indoor bocce hall built by the local Italian grape growers we settled in sipping local beers and pretending we weren’t tired. The game was a whitewash with Hawthorn not letting West Coast even breathe. So between the final siren and dinner many slipped back into stifling hot tents to steal a few minutes of precious sleep. We were to lose an hour with daylight saving starting tonight and it played heavy on everyone’s mind.
So….. final day we left town in near darkness and peddled along the coast through vines and soft sandy hills towards the start of suburbia. Then the seaside towns of Brighton and Glenelg winding our way along a busy bike path towards the mouth of the Torrens river. 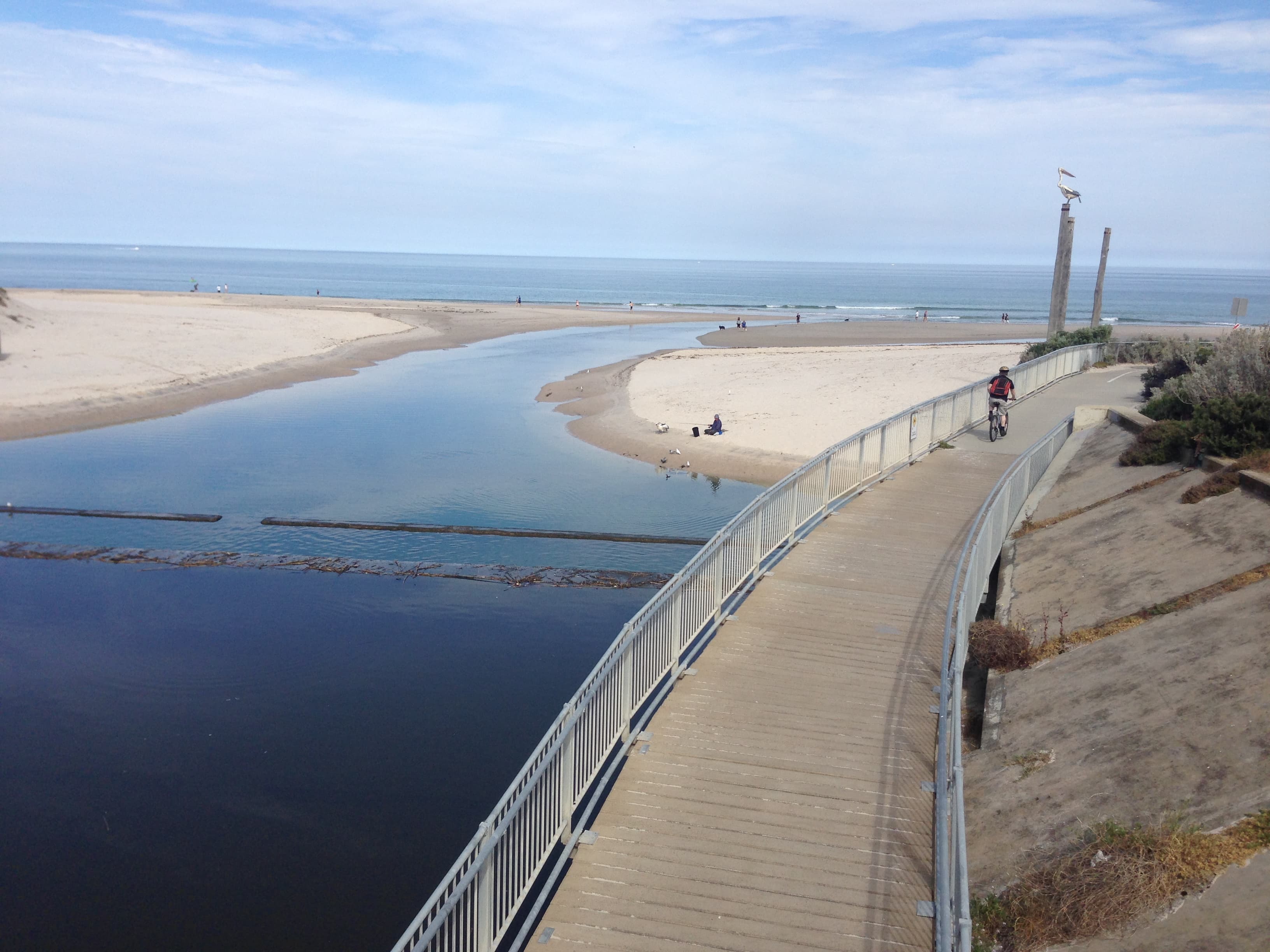 Mouth of the Torrens river.

We turn from the sea and snake out way back into the city following the Torrens river before a final lunch and farewell to our newfound comrades of the last week. You can see vitality in everyone’s face, a mixture of perfect weather, good food, good company and plenty of exercise, just what the doctor ordered. Just my bike to repackage and a flight back home. Maybe I’ll revisit that pizza place tonight. Etica pizzeria  I’ll be back, the riding and countryside have been terrific.