Well after all the fun of Northern Sumatra it was a sobering experience to be sitting in a nondescript hotel in Yangon listening to a briefing for a group tour of Myanmar. People either said nothing or let the cat out of the bag by asking really, really stupid questions before the gun went off. Group tours give you the opportunity of seeing much but also of sharing the experience with people who if you met at a party…..No, you wouldn’t meet them at a party. The guy that asked “what time he should have breakfast to be ready for our departure at 8am” sent alarm bells ringing and he has lived up to that first day question. Then again there is a Canadian who I only have to look at sideways to start howling with laughter. His smile and one liners are so contagious you’d fight to sit near him, his wife looks deadpan out the window, she’s heard every one of them a dozen times….
The meeting over, I grab Sally’s hand and rush her from the foyer and into a taxi, any taxi to get as far away as possible from this eclectic lot. We head for Monsoon, a local eating house favoured by Westerners for its clean kitchen and Myanmar beer. The food is great and the beer is excellent, which is good as we will have to survive on this for the next two weeks, our only constant, food and beer. Back to the hotel and a night interrupted with street dogs fighting and early morning crackly speaker chanting. We are straight into the a pagodas and visit the best first, Shewdagon. It is massive and covered in so much gold leaf that it is mandatory to wear sunglasses. The people here are so poor and the pagodas so lavish it doesn’t make sense but their commitment to Buddhism is unquestionable. 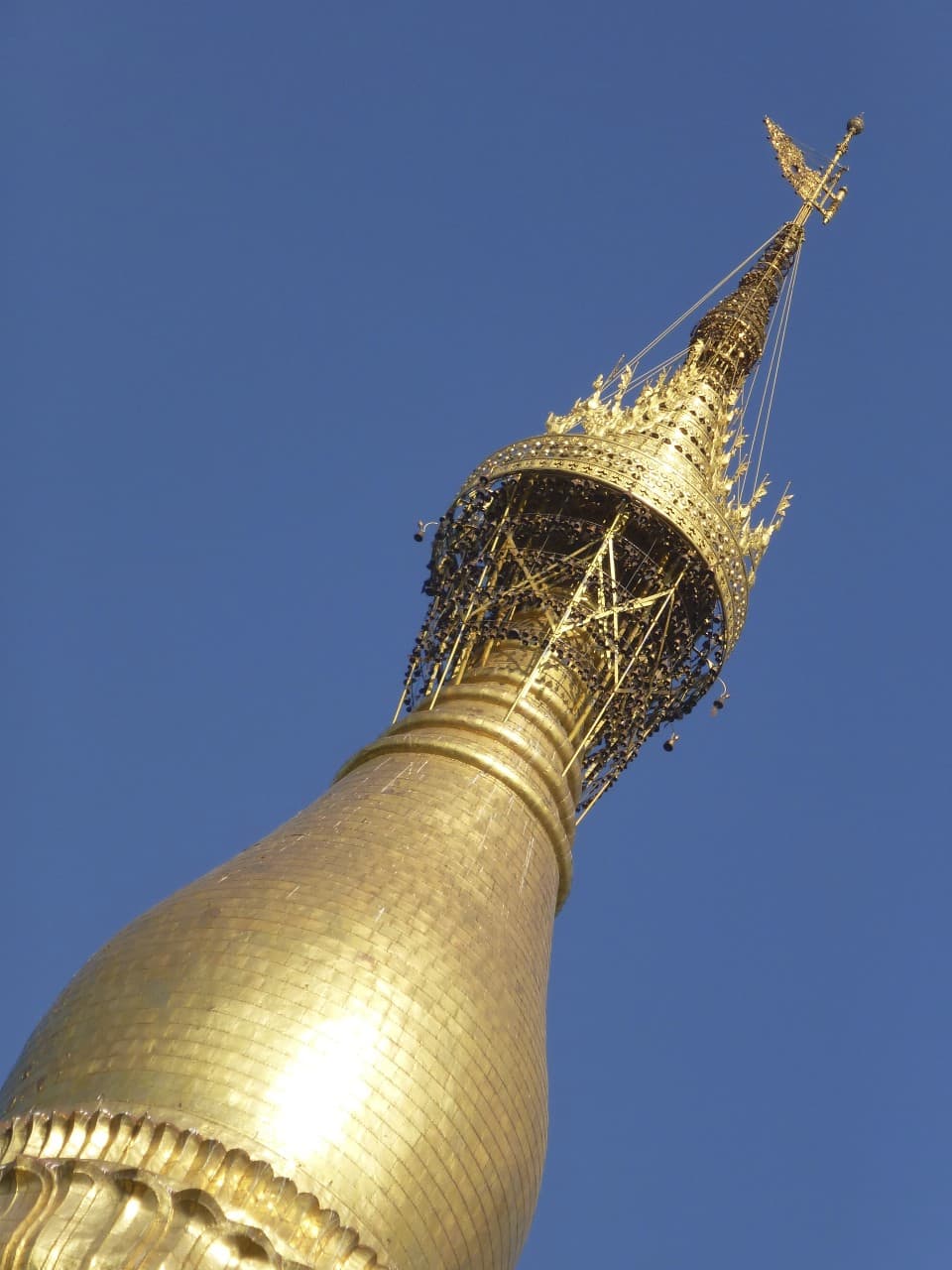 A couple of days later we fly to Mandalay, it is on a large river and we use it to visit pagodas when we are not on a bus visiting, you guessed it more pagodas. The days are busy, the lunches always seem to include Mandalay beer and a lethargic feel to the warm, hazy afternoons. Late one afternoon we walk across the bridge U Bein, a two klm walk on a very rickety wooden bridge which groans and shifts under the weight of increasing tourist numbers. I get down to water level to find that all of the poles into the mud are in fact simply sitting rotten on the mud. The bridge is famous for its magnificient sunsets and the photo opportunities achieved using the bridge as a backdrop silhouette. 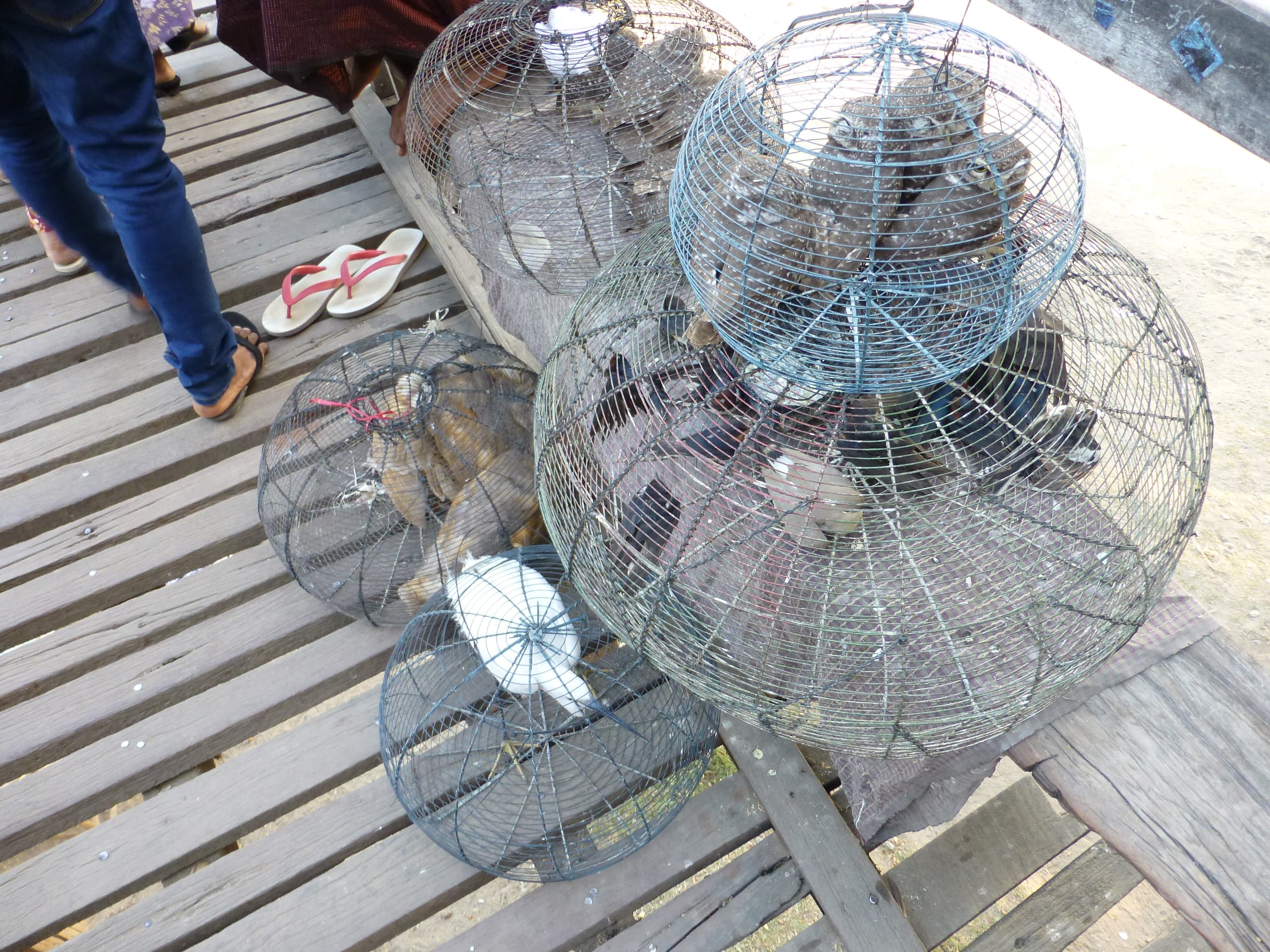 We see caged baby owls being sold for their freedom at twenty buck a pop and many in the group want a public lynching of the trader involved. 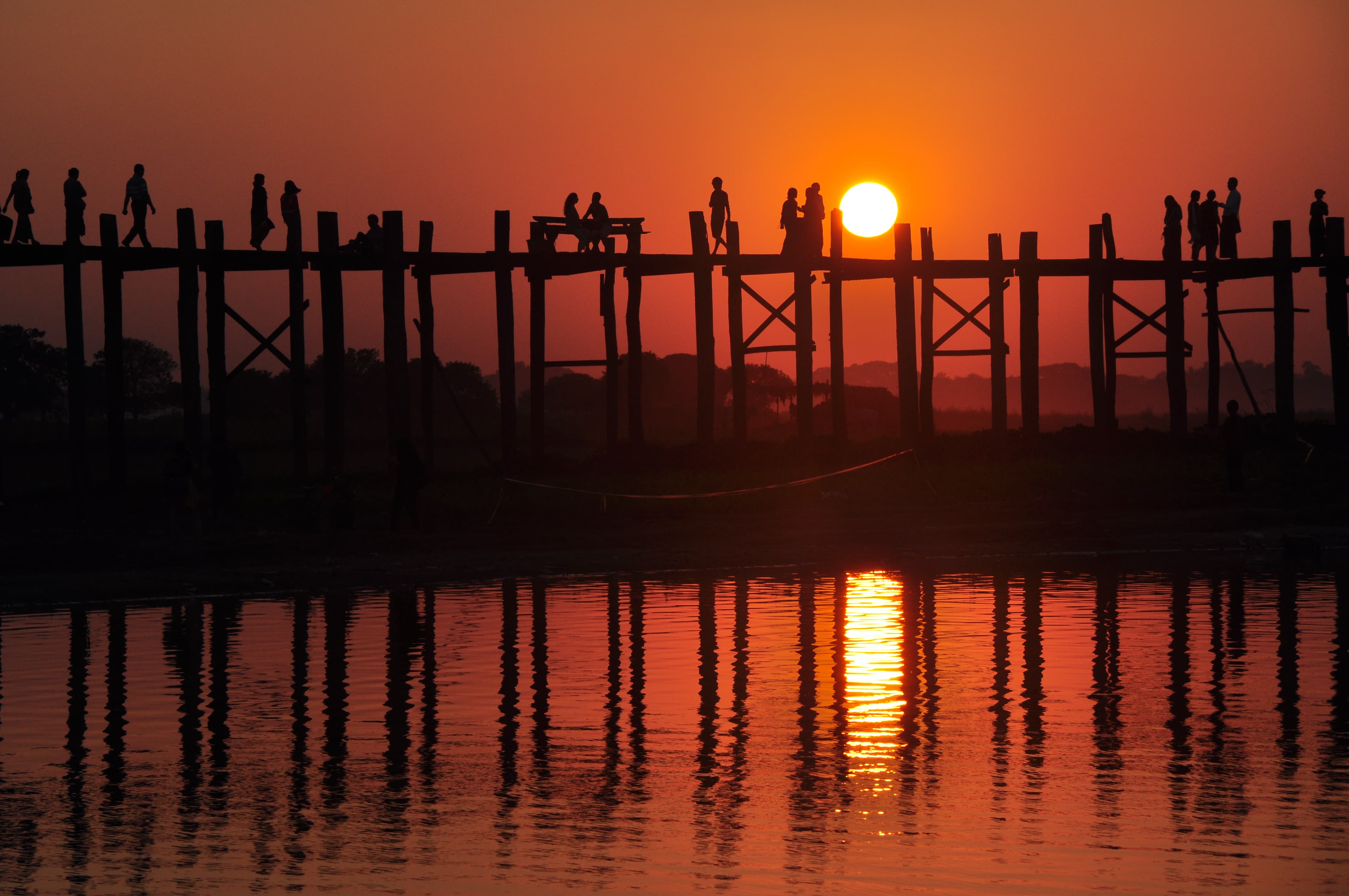 U Bein bridge at sunset. one of the most photographed spots in Mandalay. 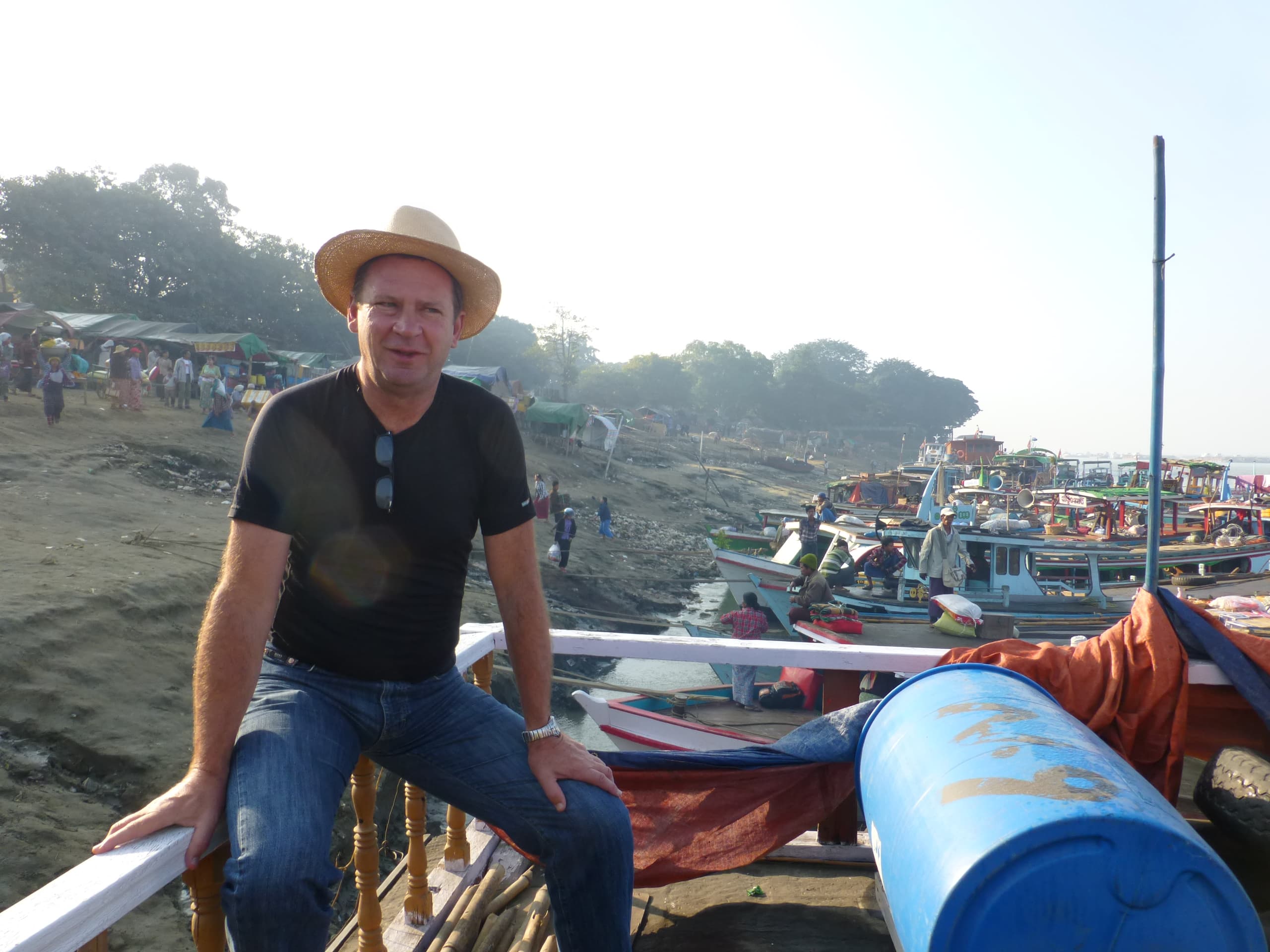 The following morning we are up at 5am for a short bus ride then a long, long ferry ride from Mandalay to Bagan.

The ferry leaves at 7am and arrives in pitch darkness at 7pm that night. In the early morning we sit and shiver on the boat, the temperature frigid till a few hours after sunrise. The river draws all of the damp cold into your bones and we all shiver uncontrollably our clothes stored down in the hold. The hours slip by, we drink thin coffee in thin cups for the warmth it gives your hands until your bladder feels ready to explode. Lunch is served in your chair, a choice of rice or noodles and at $3, a bargain and tasty. By late afternoon we all want off but no town is in sight, darkness falls. On come two hand-held search lights last used at Stalag 13. They sweep the river banks looking for some form of humanity, actually any movement would be fine by us we are over it. Finally the ferry’s lights pick up some movement on the river bank, we know we are close. Suddenly there is yelling, throwing of ropes and the rattle of a timber plank being stuck into the muddy bank to herald our arrival. Sally is surrounded by local touts, a soft target in the darkness to their piranha like selling techniques. I go to save her ? only to find that she actually wants to buy a photocopied edition of a book by George Orwell in pitch black on a muddy river bank, go figure…. 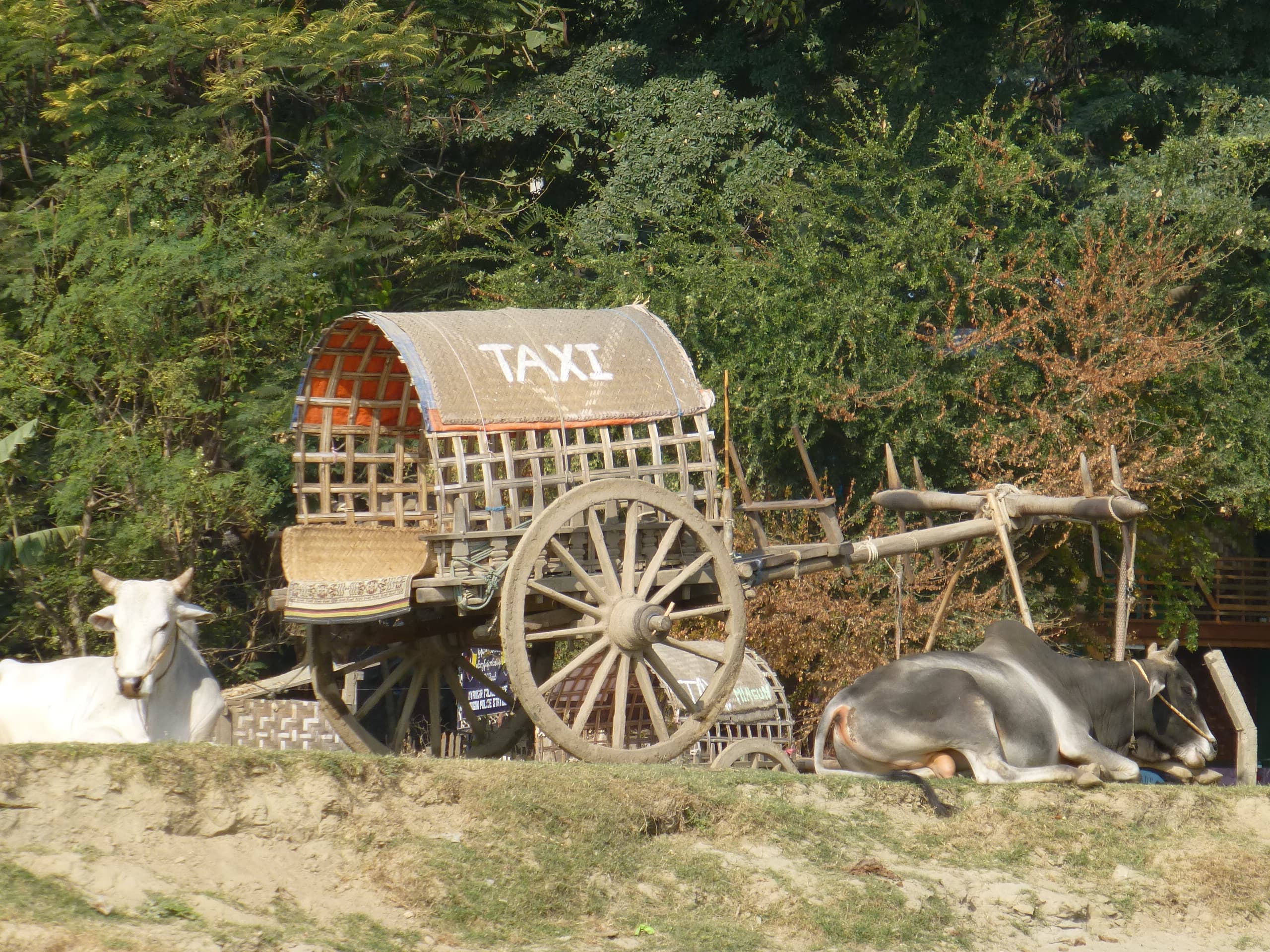 Got some spare time ? This taxi will kill as much time as you have.

We luck in on a parade of young Burmese preparing to become Monks, they are presented on horseback, bullocks and on foot to the others in the village. Their proud parents traipse behind wondering where they will find the money to pay for the lavish costumes their children are wearing. The children looking “other worldly” as they parade through the local streets signalling their commitment to Buddhism.

The rest of the day is full of pagodas,the area is thick on the ground with them. To give you an idea they built one a fortnight for sixty years in the twelfth century. Impressive statistics for a builder and many are on a massive scale. We fly the truce flag after lunch and slink away from even more pagodas and mandatory footwear removal.
The next morning we are up at 4am and rattling around in a sixty year old bus towards a bare field somewhere out-of-town. As we stand about sipping coffee right on dawn our eyes gradually become accustomed to the light. We can make out a dozen silk balloons being carefully spread out on reed matting. A gush of air starts to fill the silk, and then like a drunk standing up, they stumble into the full standing position.

Graham our pilot speaks to us with the suave tones of a British Airways pilot and soothes the nervous passengers with his track record. We clamber aboard in an ungainly manner and take our positions. There are 16 of us per balloon and a dozen in total, I won’t bore you with the cost but it is substantial and they make around $8 million per season based on today’s numbers. A massive amount in this very poor country.
Slowly we rise above the farmland and lift high in the morning mist the only noise, the roar of the propane heating the air mass of the balloon above us. The mist burns off and we are drifting above the spires of hundreds of pagodas. From far below we hear the rhythmic chanting of the local people reciting their morning prayers it swirls around us and adds another dimension to the experience. How lucky to be able to experience this country with a bird’s eye view. So thats what the birds see ?
And then it’s the ground coming up at us and the noise of the ground crew shouting and grasping at straps hanging from the basket as they attempt to tether us to terra firma. Graham, the pilot stand looking around him, quite pleased with himself and his team of local boys. Another incident free day at the office. We climbed out with the same amount of finesse that we showed on entering. Drinks are served as the boys release the hot air that delivered us here. Graham lifts a glass ” To propane and Champagne” a great toast and a great way to start our day. The same old bus rattles us back to our tour group who have just finished breakfast, they can tell we are full of stories. 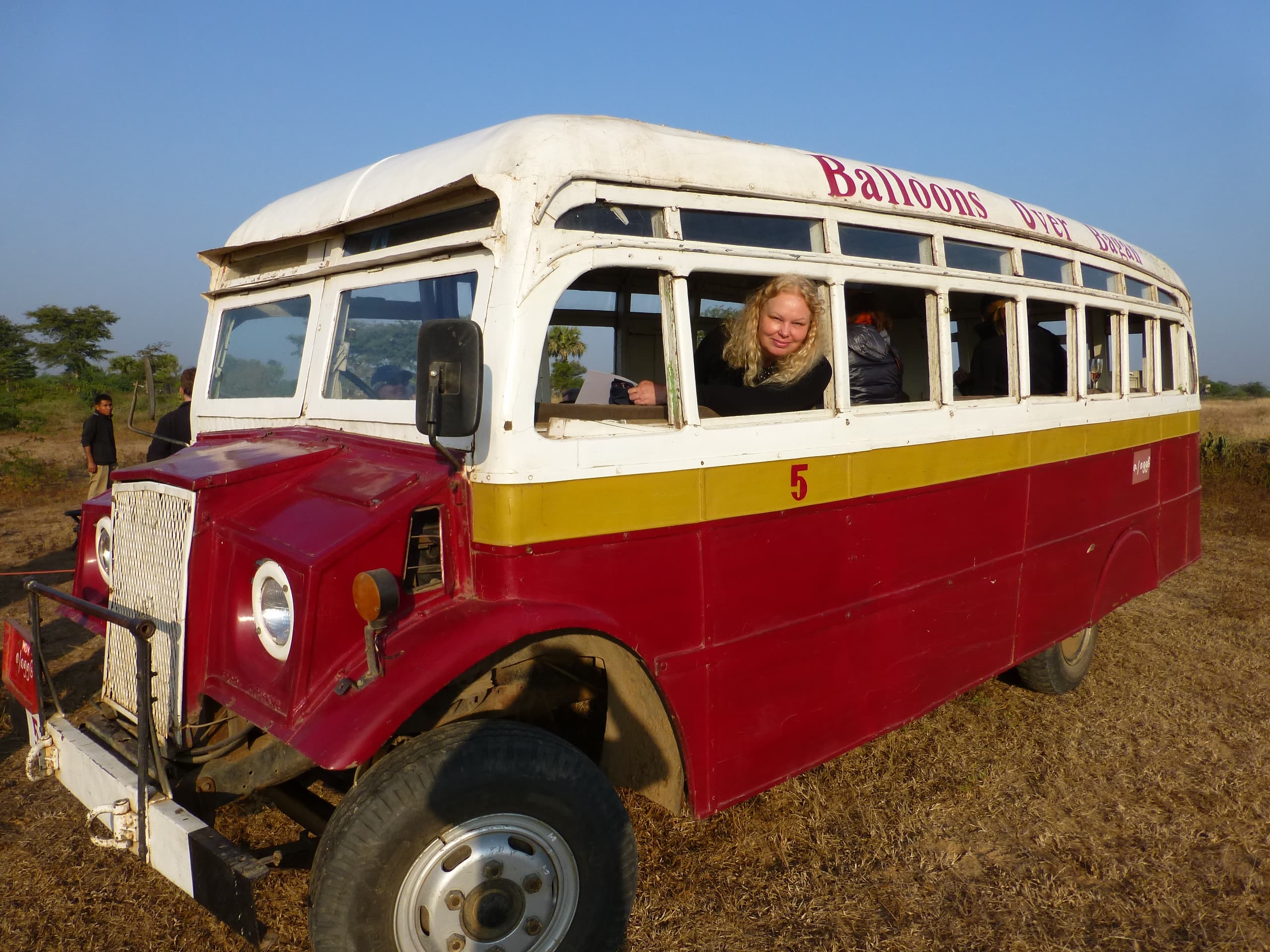 Just loved the old buses left behind and converted after the war.

The trip seems to be full of early morning flights. Another of these took us to Inle Lake, famous for its one-legged paddling fishermen. We arrive, travel an hour by bus to a small river and then board skinny four seater boats. These old spluttering diesel engines propel us along the rivers at warp speed sending a great backwash against the riverbanks before we are spat out into a large lake. We spot some of these famous fishermen, of course They put their hand out for premium photography opportunities, yet we will see many more over the coming days. Our hotel stands on spindly wooden legs on the lakes edge. The sound of these putt putt diesel engines is not unlike the drone of mosquitos without the itch. Each day we have visited different communities spread around the lake. The one common thread being that all transport is done in one of three boat styles, a fishing boat, a tourist boat or a transport boat always laden to breaking point. We visit, tapestry workshops where the hand dexterity of the weavers together with their foot pumping technique would impress the organist at a revivalist sermon. Hallelujah brother. The finished fabrics are beautiful and like most of the people here they work for a dollar an hour. It was our last night last night. Our mishmash of personalities almost stayed glued together by the desire to see this emerging country. I say almost because one girl who simply felt that the universe crystallised somewhere near her bottom finally got too much for most of us, Princess Meme, as I dubbed her was the most self-centred person you could meet. Even in a zen like culture like Myanmar we all wished her taken in an unexplainable stampede by a local bullock.
A group of us wandered across the road last night for dinner, a safe menu and our trusty Myanmar beer. We have learnt the ropes over the last two weeks to the point where Mike knew enough local custom to call the waiter for free beer when his bottle had a lucky marking under the cap. We have opened these bottles consistently always to find the words, “enjoy drinking” or “try again” in the local language, well this time we came up trumps. And they actually honoured the free beer I was gobsmacked.
After dinner we walked towards the People’s Park, the aura of the Shewdagon Pagoda and its  gold plating illuminating the sky. It was pitch black but we found an open gate and walked towards the broad steps directing us to the ball of light. It was magical and we all stopped to immerse ourselves in the moment, the massive size and beauty of the Pagoda left us all in awe. Two barefoot armed guards at the main entrance turned, surprised to find us behind them, and pointed to a small opening in the gates. They gave us a flicking wave to exit immediately which was a hell of a lot better than pointing their rifles at us. We have had a fantastic experience here and an opportunity to see a vast range of the culture and everyday life in a country desperately trying to find itself. soon there will be elections and hopefully a true democracy will move the country forward. I feel privileged to have visited this country on the cusp.