Surely twenty years hasn’t slipped past since I was last in Egypt. I still recall the worst travel sickness I have ever had was here. Robyn and I had booked and paid to ride donkeys into the Valley of the Kings at dawn. I spent the whole night circling the toilet like a rabid dog unsure of what was coming next. By morning I was rung out like an old dishcloth. Completely sapped of energy only wanting to die. As Robyn left with the rest of the group I was curled up on the cold bathroom floor clinging to the porcelain ! Robyn LOVED the Valley of the Kings although she was unsure of the donkey ride……… I stayed in the bathroom and cemented my friendship with the big white telephone. Yes that was twenty years ago and I can still remember that bathroom, that poor toilet. 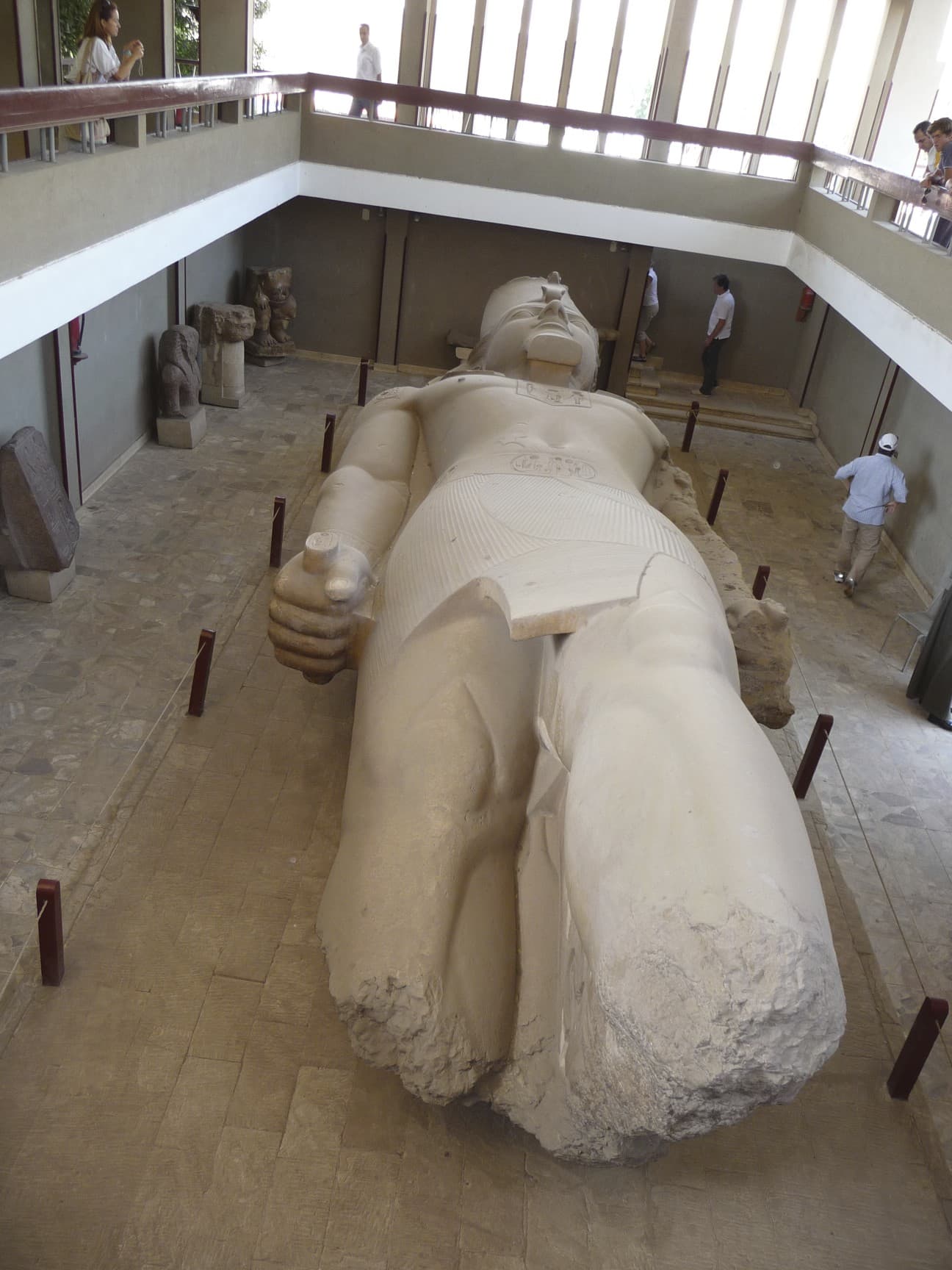 How can you not be impressed ?

I can’t believe it. The country and its people are in a worse state than they were twenty years ago. Malnourished beggars everywhere. Big statement, but the government of thirty years isn’t doing anything for these desperate people and they are looking forward to elections next year. That said, the place is magical in many of the same ways that travellers fall for Indian life. Blaring horns, men wearing dresses and getting away with it, dust, flies and those damn drums ! I’m on a Peregrine tour of ten days down the Nile and then on to Abu Simbel. 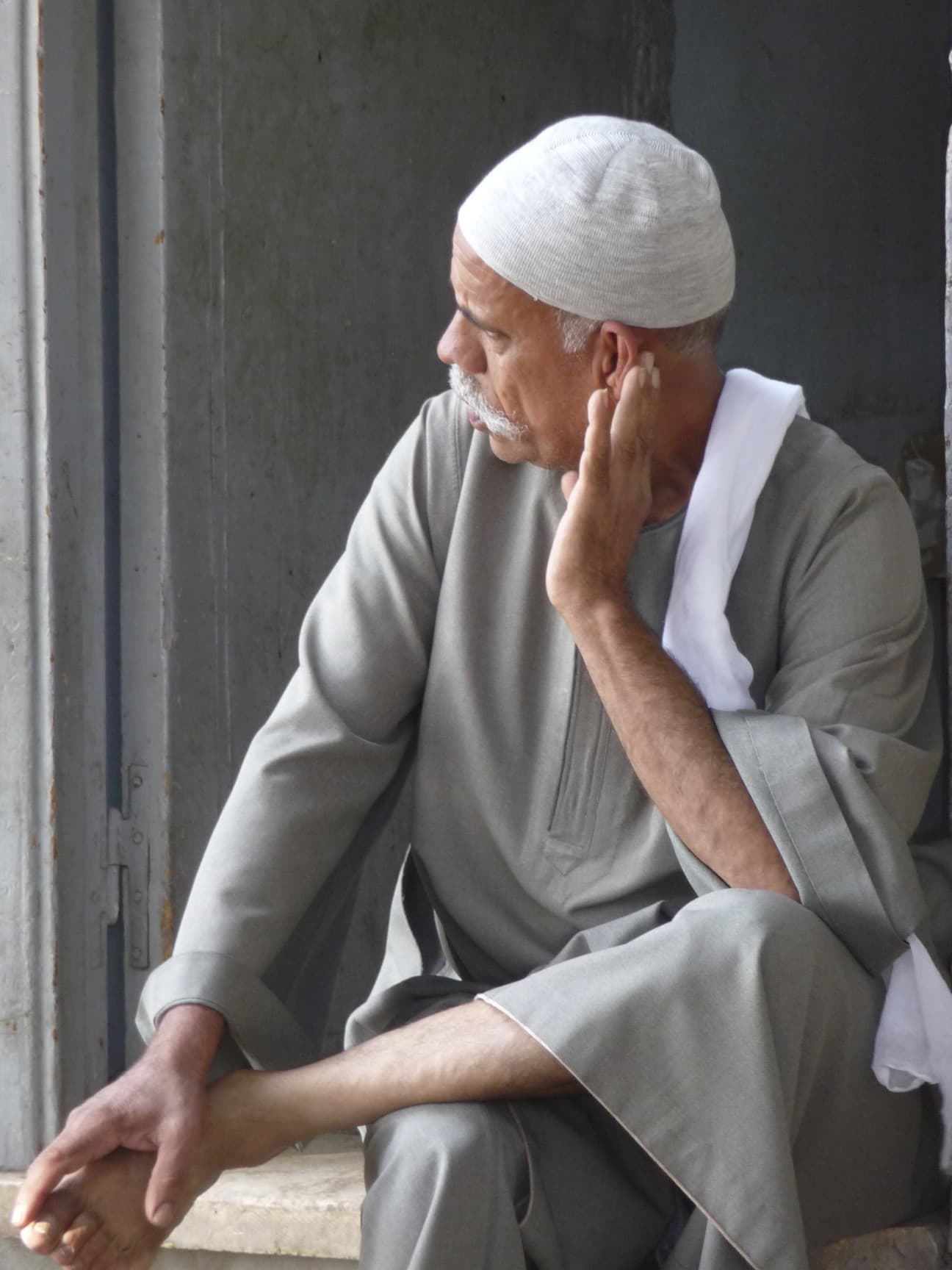 We’ve been out to the pyramids at Giza, new hotels built so close they almost cast a shadow over the pyramids. The Sphinx looking as nobel as ever then back to a hotel with a pool that looks so inviting. No one goes in, we are all wary of getting sick and resist. I love the dusty Cairo museum it’s like a scene from Raiders of the lost Ark with Harrison Ford cracking his whip amongst the mummies and golden burial mask of Tutankhamen. 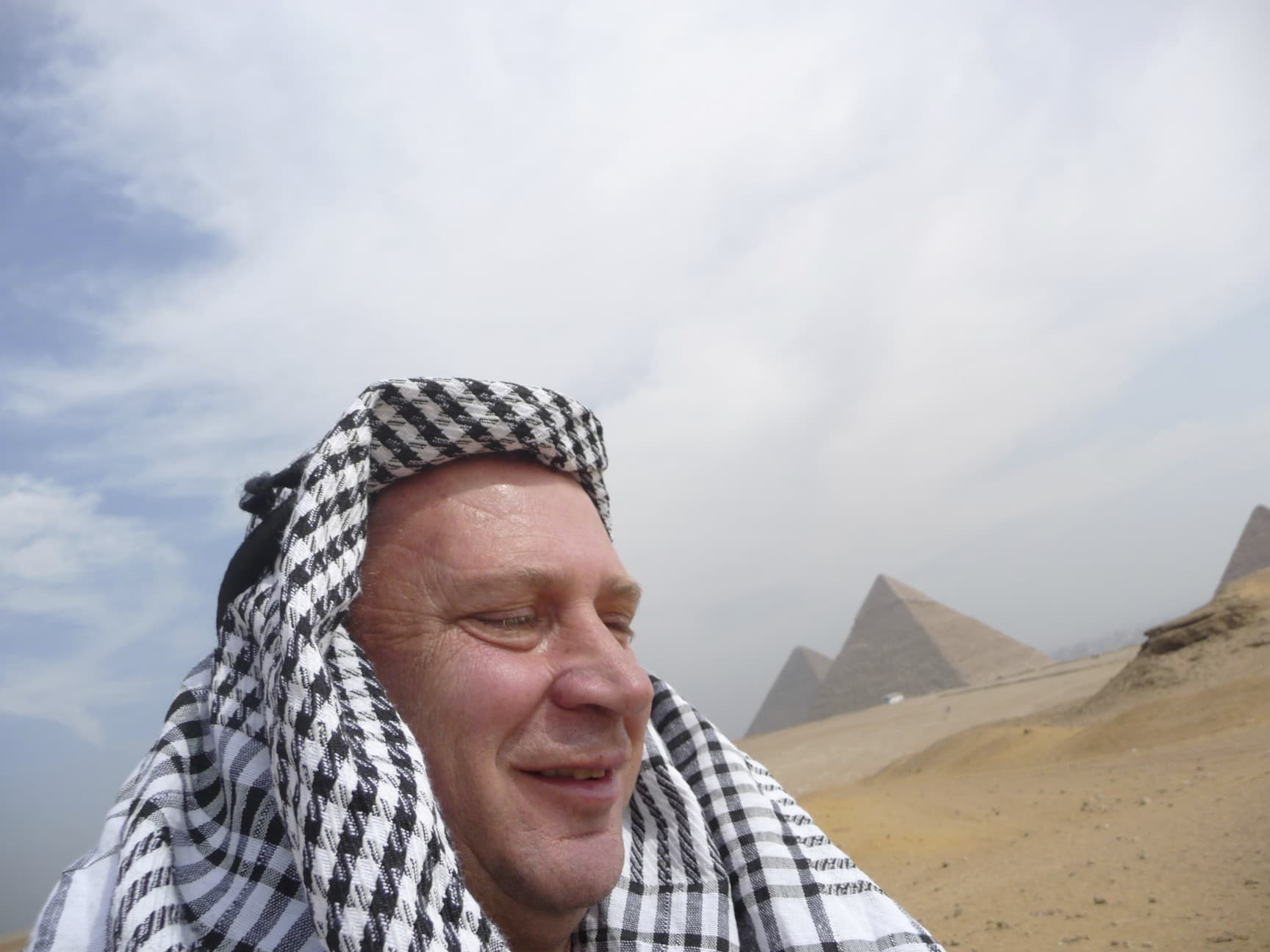 Hardly a natural…..its the towel that puts me off. Reminds me of doing the dishes.

All great stuff, we prepare for the overnight train journey down to Luxor. The very same train that Robyn and I squeezed onto many years ago. So happy to be out of the tiny train cabin and out into the glaring morning light of Luxor. How can you prepare yourself for Luxor, the site of massive clusters of ancient columns at the Karnak Temple which dominate the skyline. Still squinting after the darkness of the train in the bright sunshine. Wrestling the local touts whom swarm like locusts amongst the tourists stripping them bare of every single denomination in their pockets. At least on this trip the Aussie dollar is strong and getting me more than a cheese sandwich and a glass of water. 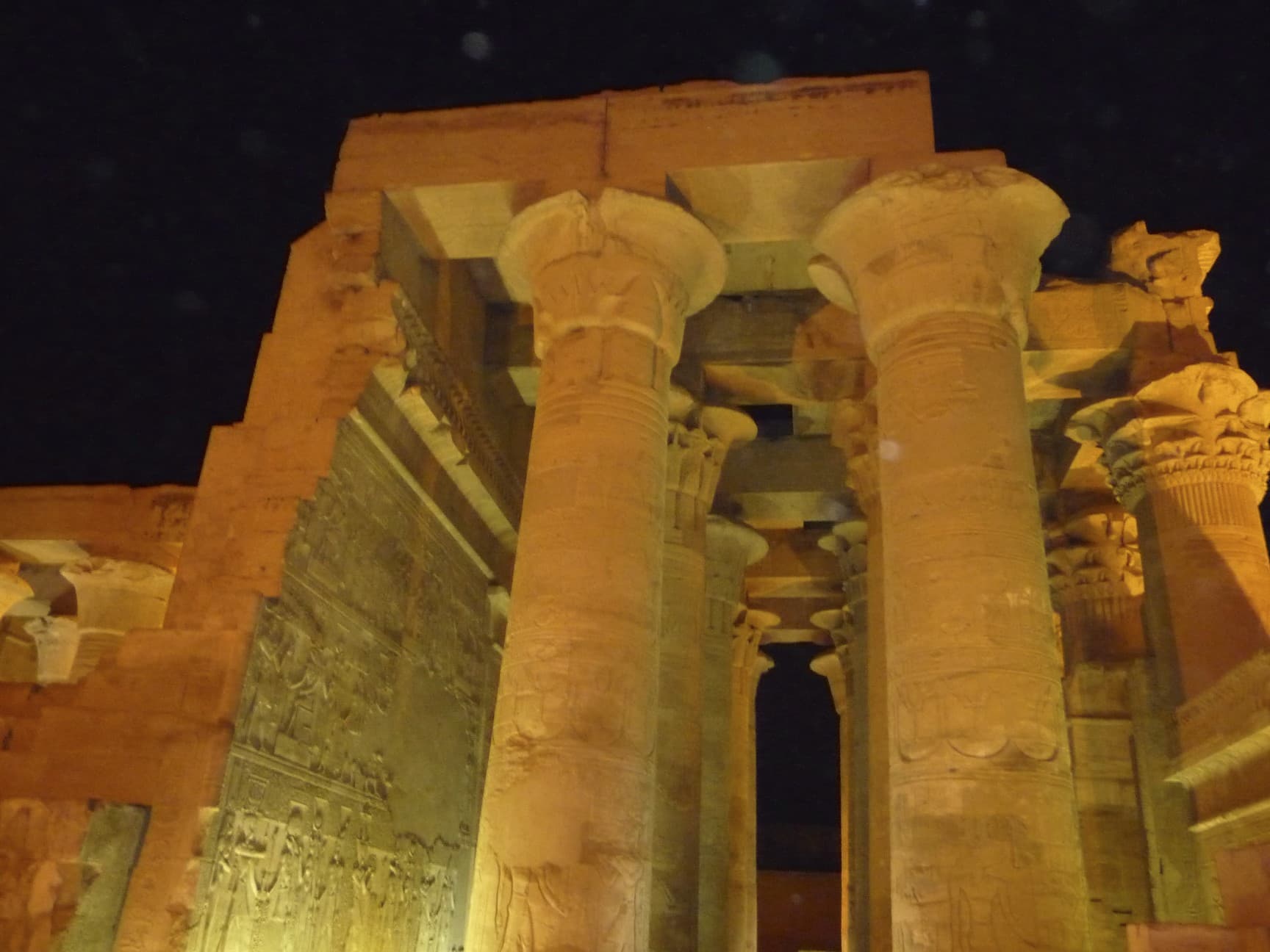 We transfer onto a Nile cruise ship they are massive things. We are on one of more than four hundred plying the river ! In 1990 and the Gulf war around the corner there were none sailing, none. Our boat then was a sixteen person, dressed up, shipping container,. Not quite but it was only one step up from those hash smoking, casual sex, beer swilling felucca boat trips I so wanted to travel on. Yeah, I was hoping they were still sailing but AGAIN they were booked out. 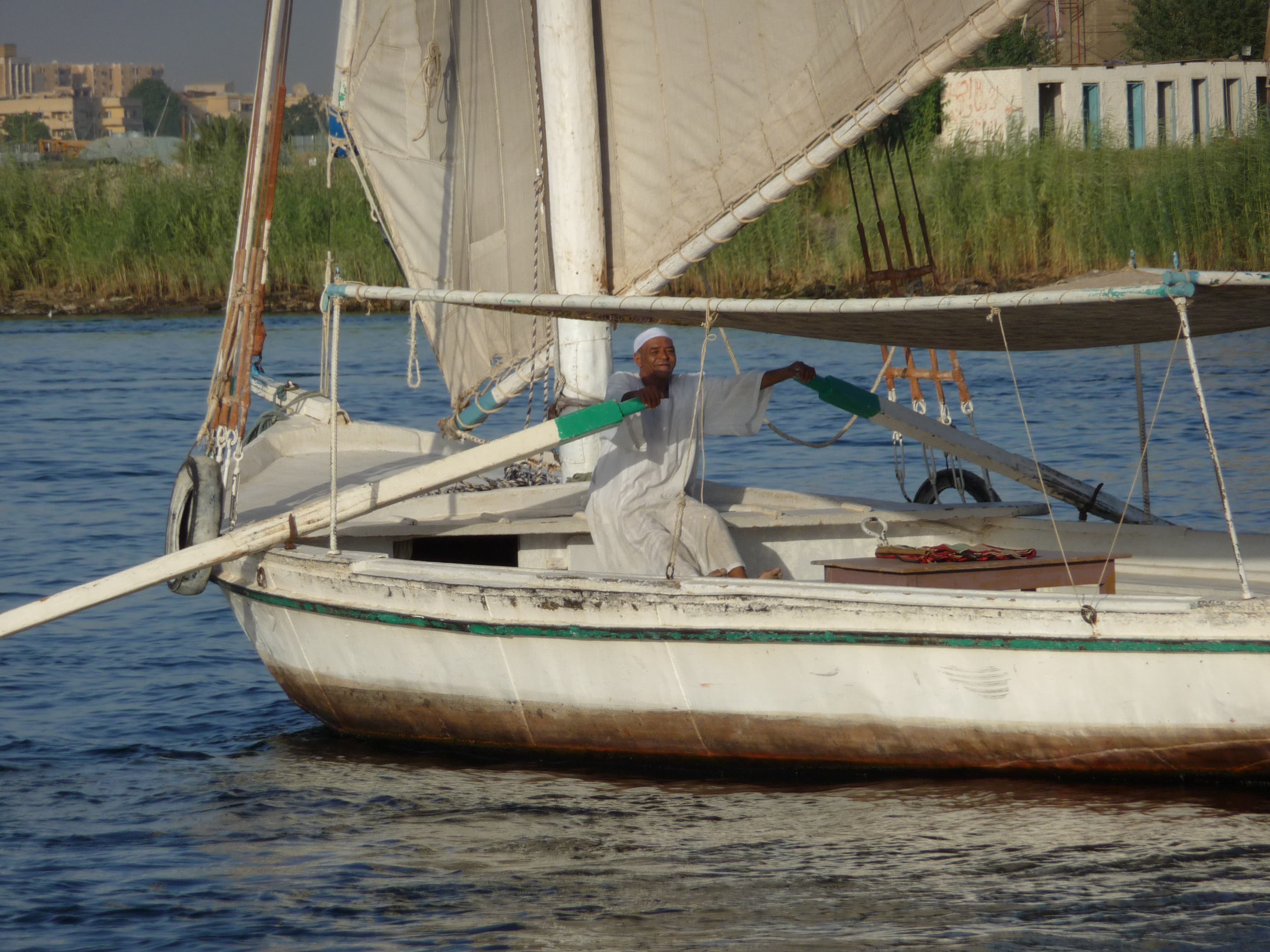 Bob is the man in charge of entertainment on the ship. It’s as if someone has inserted a battery up his backside each morning, he goes nonstop for at least the next twenty hours without stopping. He makes us all welcome, upsets no-one however your drink bill is more than you might expect at the end of four days. I’ve ridden donkeys out in the country, had carriage rides at dawn to empty temples, ridden a camel amongst the pyramids, sailed on a felucca called Captain Hash and swum off the sandy banks of the Nile. Oh yeah, finally got to walk (no donkey, damn) into the Valley of the Kings and into the tombs, fantastic. All in a week…. They probably haven’t even noticed I’m gone at the Hospital project back home ! 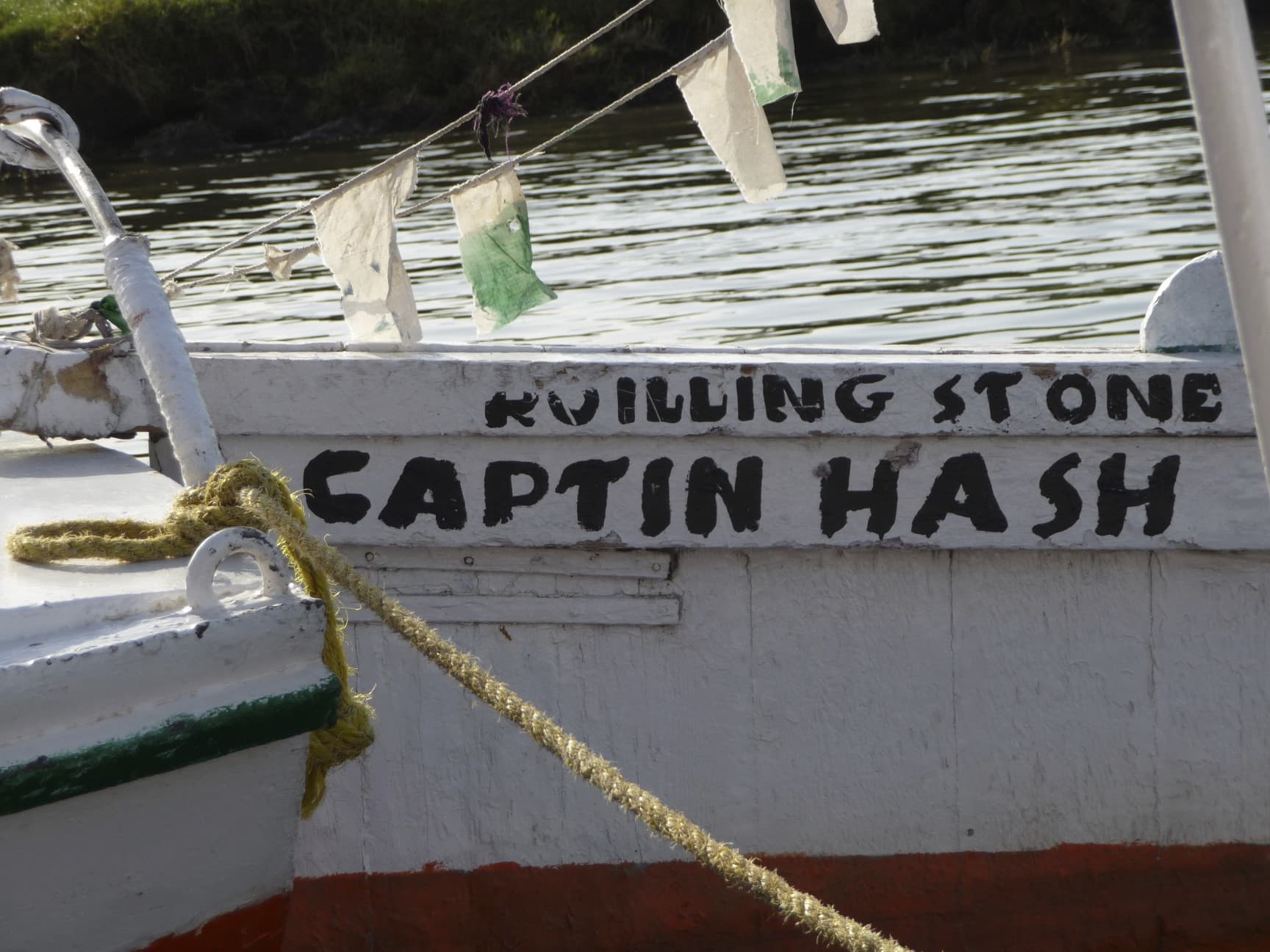 But my real reason for returning was to see Abu Simbel. I’d missed it last time and had regretted it. Luckily I had a chance to return. Back then it was a three-hour car trip from Aswan. Phil Parton describes this middle of the night trip best. “Imagine someone holding a hair dryer in your face for three hours in pitch darkness” you then visit the tombs then jump in the same taxi for the return trip. Now it’s daytime and the temperate has climbed up to the mid 40’s Celsius ! Nope………..not these days.
Instead our group rose at 2.45 this morning to catch a half hour flight to Abu Simbel arriving at dawn and in the cool. The steward sat behind me in the tail of the 200 seat aircraft and texted friends throughout the whole flight ! On landing and without his mobile having caused us to ditch in the nearby dam, we get a bus to the temple site in time for the first rays of the dawn sunlight. The whole massive temple was lifted 66m higher and a few hundred metres from the water’s edge when they built the dam. If they hadn’t moved it the temple would be sitting under the water now. What an imposing temple it is and a tremendous engineering feat back in the 60’s by UNESCO. I challenge anyone not to be impressed. 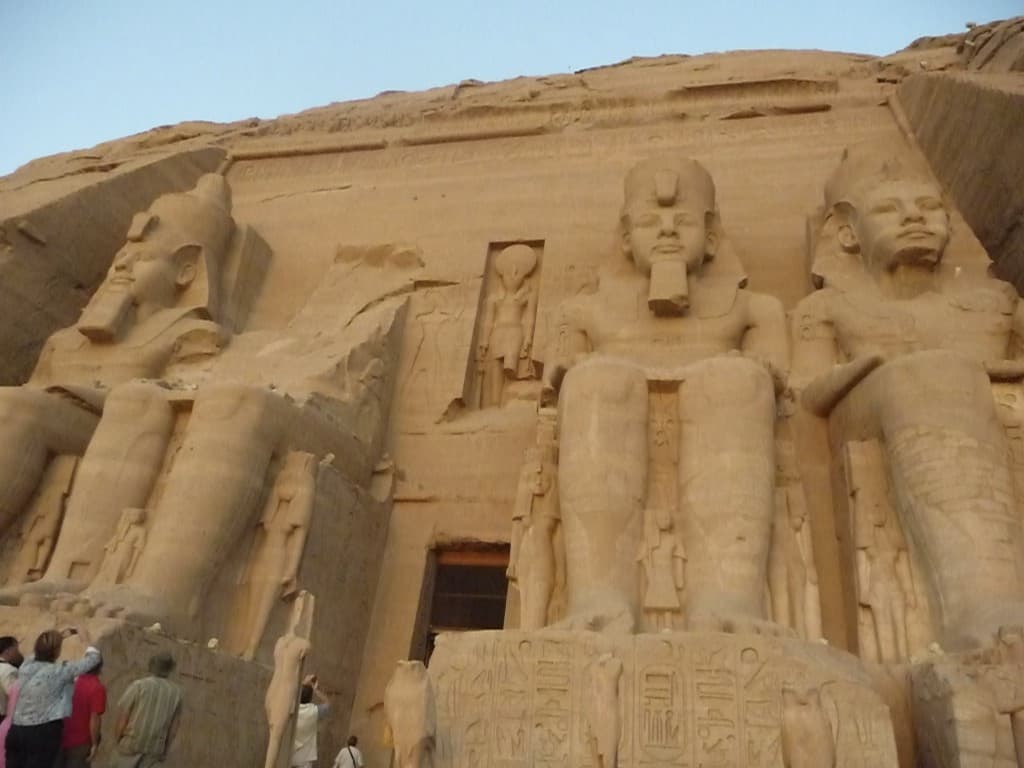 We are back in Aswan, the choice was going to the markets and get fleeced, go to a museum or visit another temple. Like being born with blue eyes, we are all born with only so many temple visits to our name. My temple visits have been all been used up, that’s official. The air-conditioning in the hotel is just fine by me.
Tonight is the train back to Cairo, the club car WILL be attached and my ongoing relationship with Egyptian Stella beer manufactured locally and drunk exclusively in Egypt will continue. Our tour leader, Chemo (yes, even he says it’s a confronting name ) leaves Peregrine Tours after 7 years tonight so I’m expecting a head ache.