Whilst everyone else on the train was dressed in the finery, ready to take on the bookmakers at Flemington. I was balancing my bike as the train lurched towards the city. Was it too late to take a punt, to double my money and drink too much at The Melbourne Cup ?  I probably should have given it more serious consideration. Instead whilst the punters poured up the escalators for their connecting train to the races I slipped around the corner and waited for my v-line train to country Victoria.

A couple of ladies dressed like peacocks, ready for a big Melbourne Cup Day.

I was directed to a baggage carriage with Chiltern written in chalk in the wall and told to prop my bike against the wall. Will it tip over I questioned the disinterested railway worker. nah, it’ll be fine and sure enough it was but we didn’t go at warp speed either. Soon enough we were heading North seeing the back of Melbourne from a backyard view. The ugly bits, the overgrown, the graffiti, the discarded. Within half an hour we were in glossy green countryside, a Winter of good rains had the grass tall, the dams full and the sheep and cattle bewildered that it was all theirs for the taking. Inside the train excited children fidgeted, older settled in and soon were sleeping and a few tourists took hundreds of photos through grubby glass of blurred hills. At isolated stations people left us, usually into the open arms of a relative or friend who hadn’t been seen for years. Others joined us with a final wave from those who care and then they too settled in and their heads dropped.
I got out at Chiltern, a town famous for not moving forward. Whenever an old town is needed for a movie, a town of no signage, no glitz and glitter, of the twentieth century they turn to Chiltern. It’s Ned Kelly country and I think he scared everyone away, forever. I clicked into my peddles and began the sedate ride to Barnawartha where my brother-in-law, Andrew and his wife Mandy live. Long shadows on the gun barrel straight roads, a breeze at my back and the birds singing, it all seems pretty perfect. The shadows also give me warning of the swooping magpies who dive-bomb me startling me to attention and out of my train induced lethargy. The farm at Barnawartha is in a magnificent setting nestled in Indigo valley, the mountains sweep along its flanks. I turn into their property and roll across the “billy-goat bluff” bridge, so rickety and noisy that its an inbuilt alarm, you could never sneak in. Dinner is family catch-up talk and far too relaxing. Prosecco, red wine, seafood pasta and a homemade cake. This wouldn’t last I thought as I fell asleep in clouds of cotton upstairs. 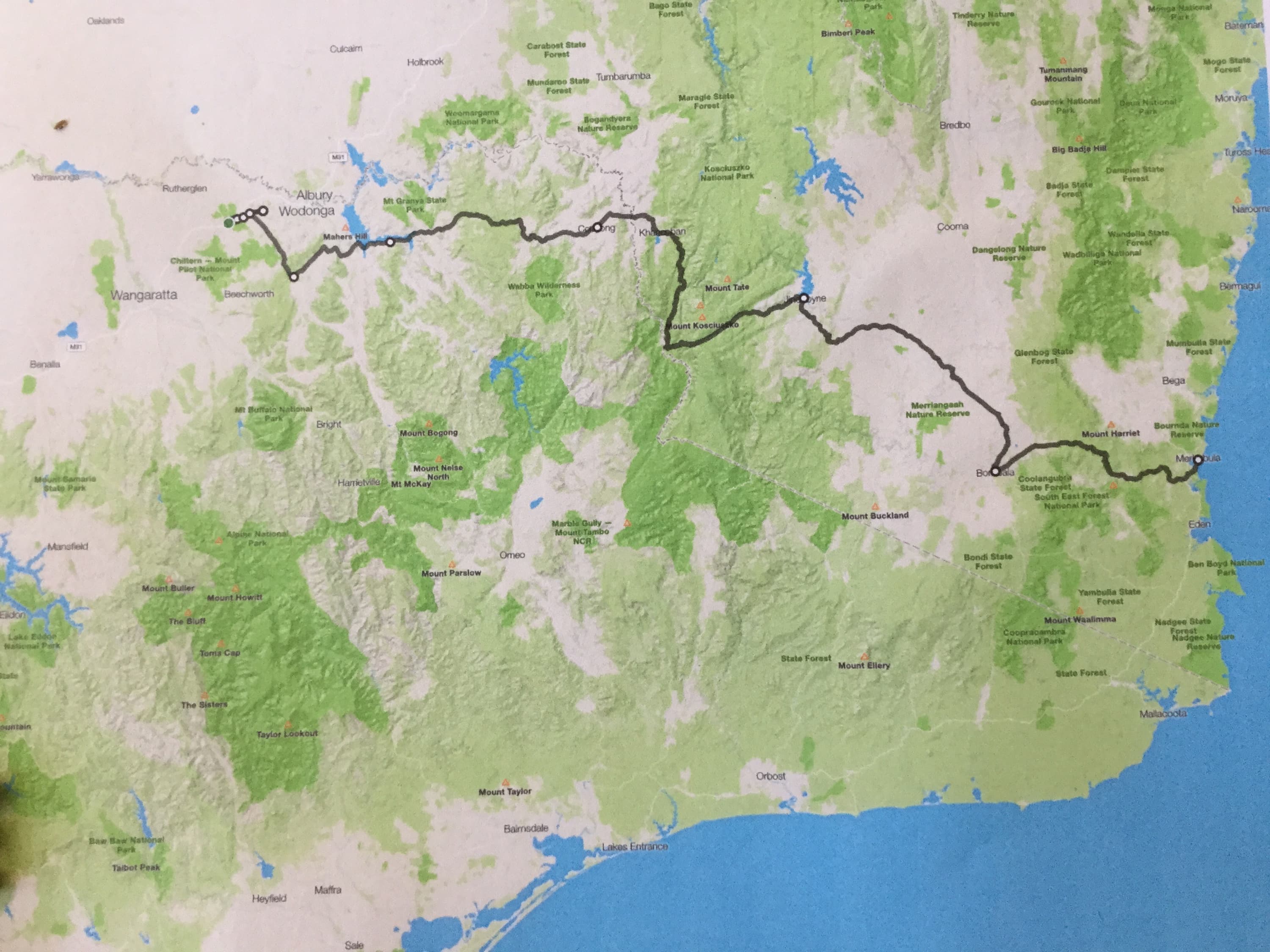 Andrew follows me out along the country roads the next morning, the hills are soft and ease me back into the rhythm of touring. We visit their proposed new home site in the sprawling city of Yackandandah. I’m on my own after that, winding through lush country alongside the Murray river and then start the gradual climb to Corryong. I enjoy a tail wind all day and arrive tired but content at my progress. 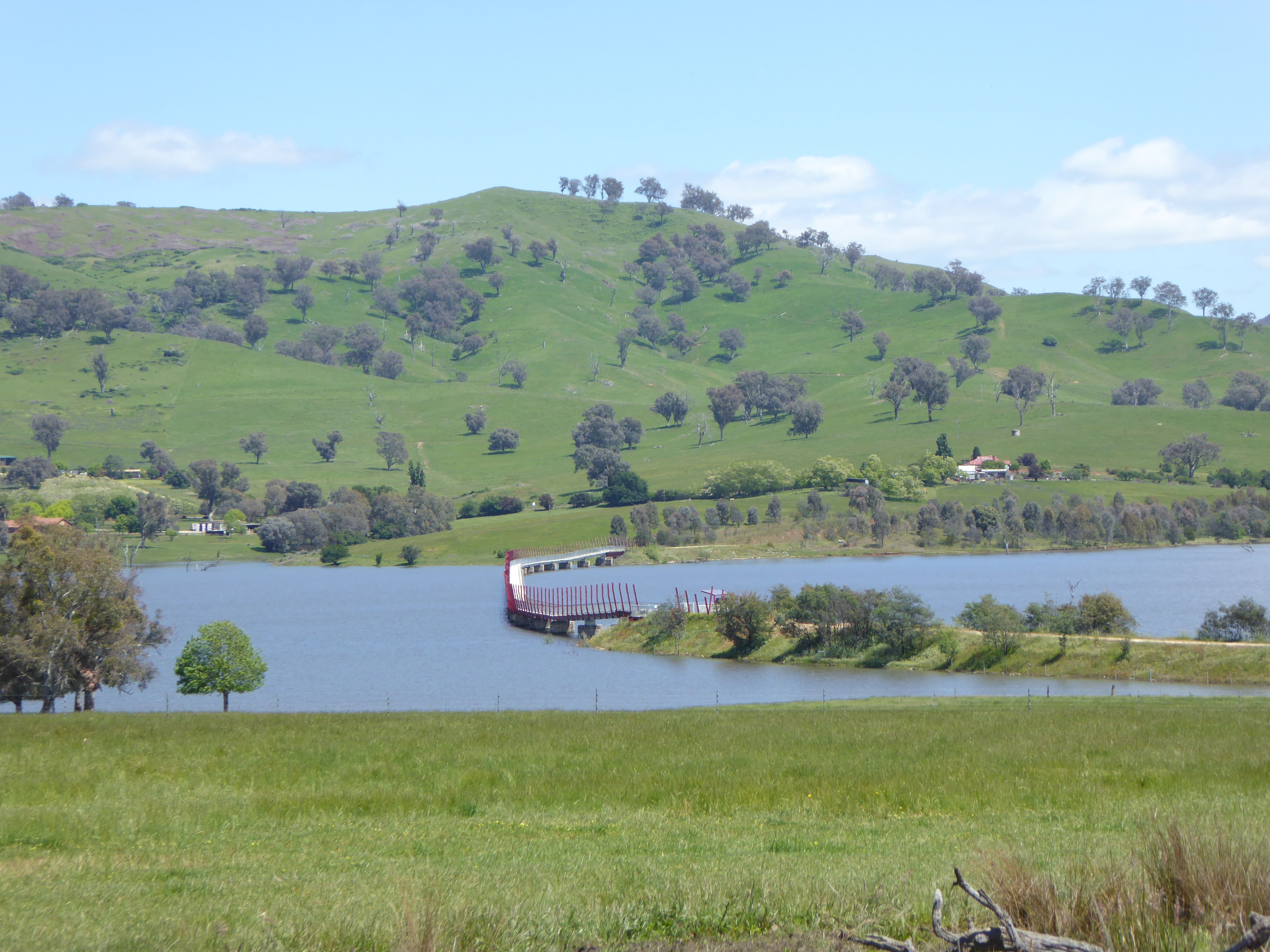 The bike path around lake Hume near Old Tallangatta. No I didn’t know about it.

Corryong to Jindabyne, I’d checked it out on Strava, seen the climbing got the distance wrong in my head and had no idea that I would climb more metres today than my hardest day in the Italian Alps. 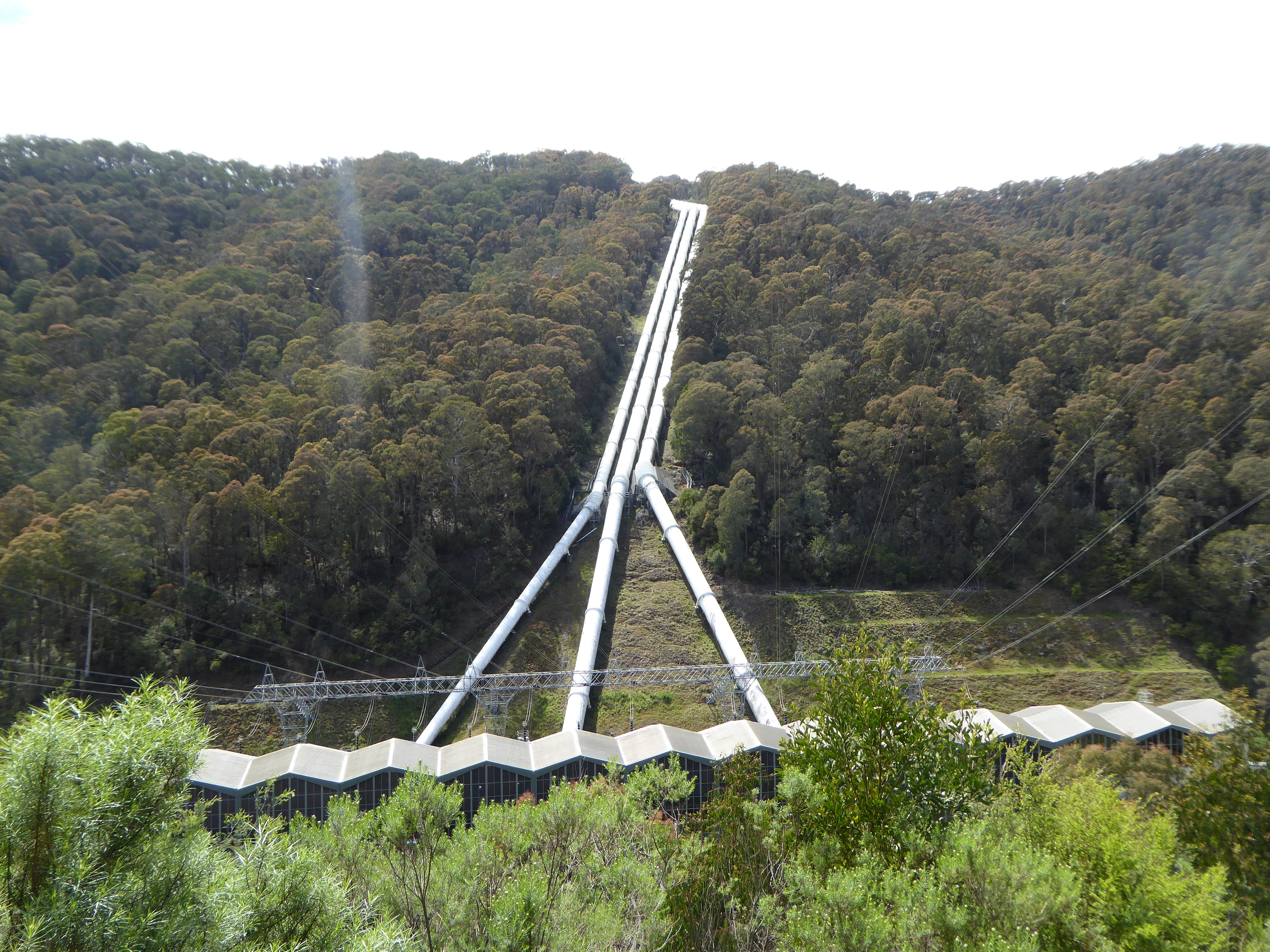 The gradient became steeper, the sun went from peeping its head out of cloud to biting me hard and I dripped sweat hour after hour till the screen on my speedo was a salty pool. Respite in Khancoban and then back head down knowing I wouldn’t see another town till Thredbo. 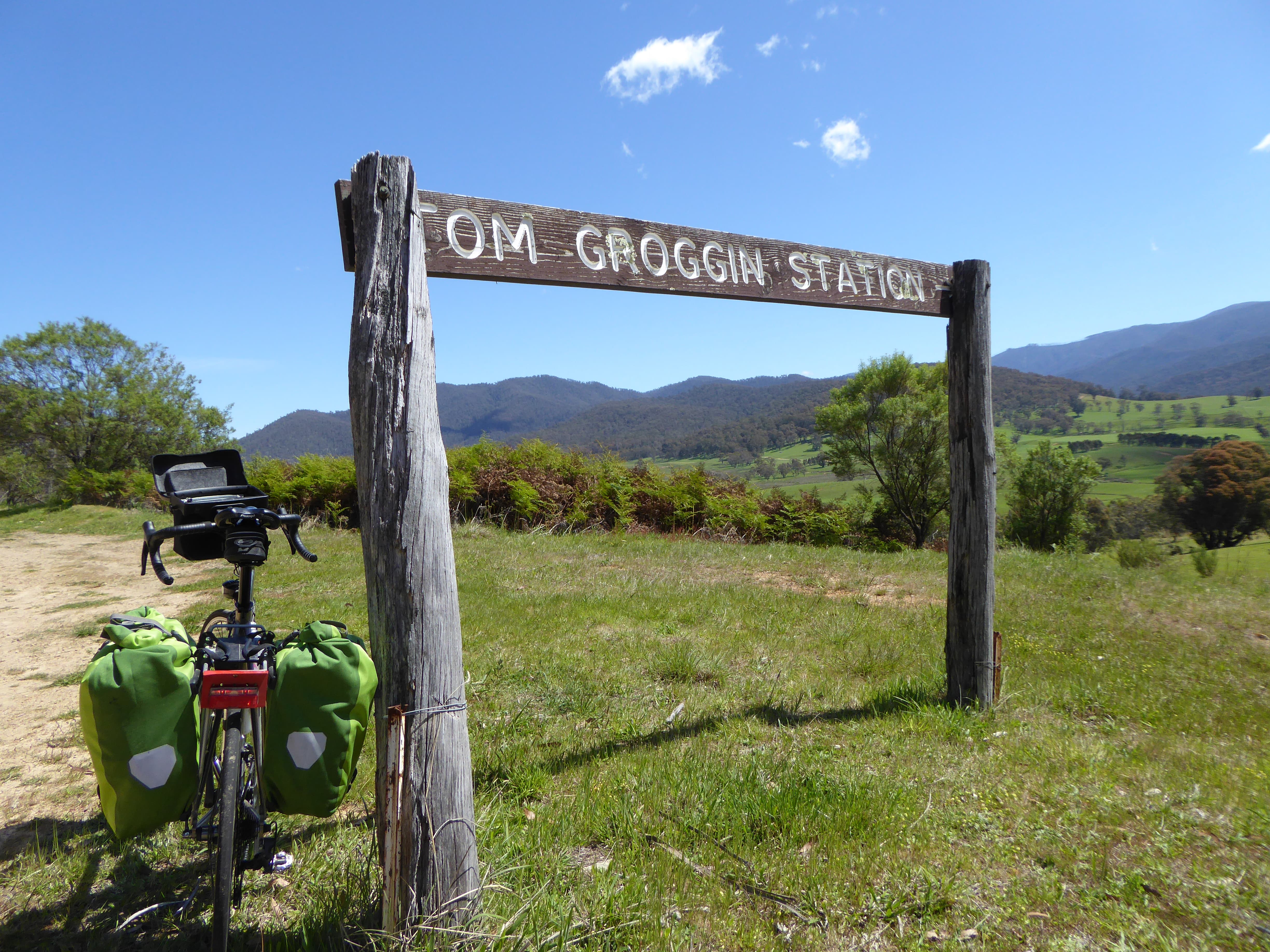 Tom Groggin Station, the most beautiful alpine pasture in Australia.
Banjo Patterson visited the station in 1890 and the poem “The man from Snowy River” is said to be about the station manager of the time.

Little did I know it would be 5.30pm when I made Thredbo, walking about four klms when leg cramps made it impossible to peddle. I was over it when I finally reached Dead Horse gap, no I didn’t make that name up. Robyn and I walked near big groups of wild, frisky brumbies here years before. I was finally over the worst. I didn’t stop at Thredbo but simply enjoyed a forty km effortless roll into Jindabyne. I was a shattered man as I stumbled with my loaded bike into the Jindy Inn fearful that the town would close before I could get something, anything to eat. I showered, made light work of a beer, some red wine with a steaming large bowl of pasta and then rode back to the Inn. I can’t remember a thing after pulling the door to. 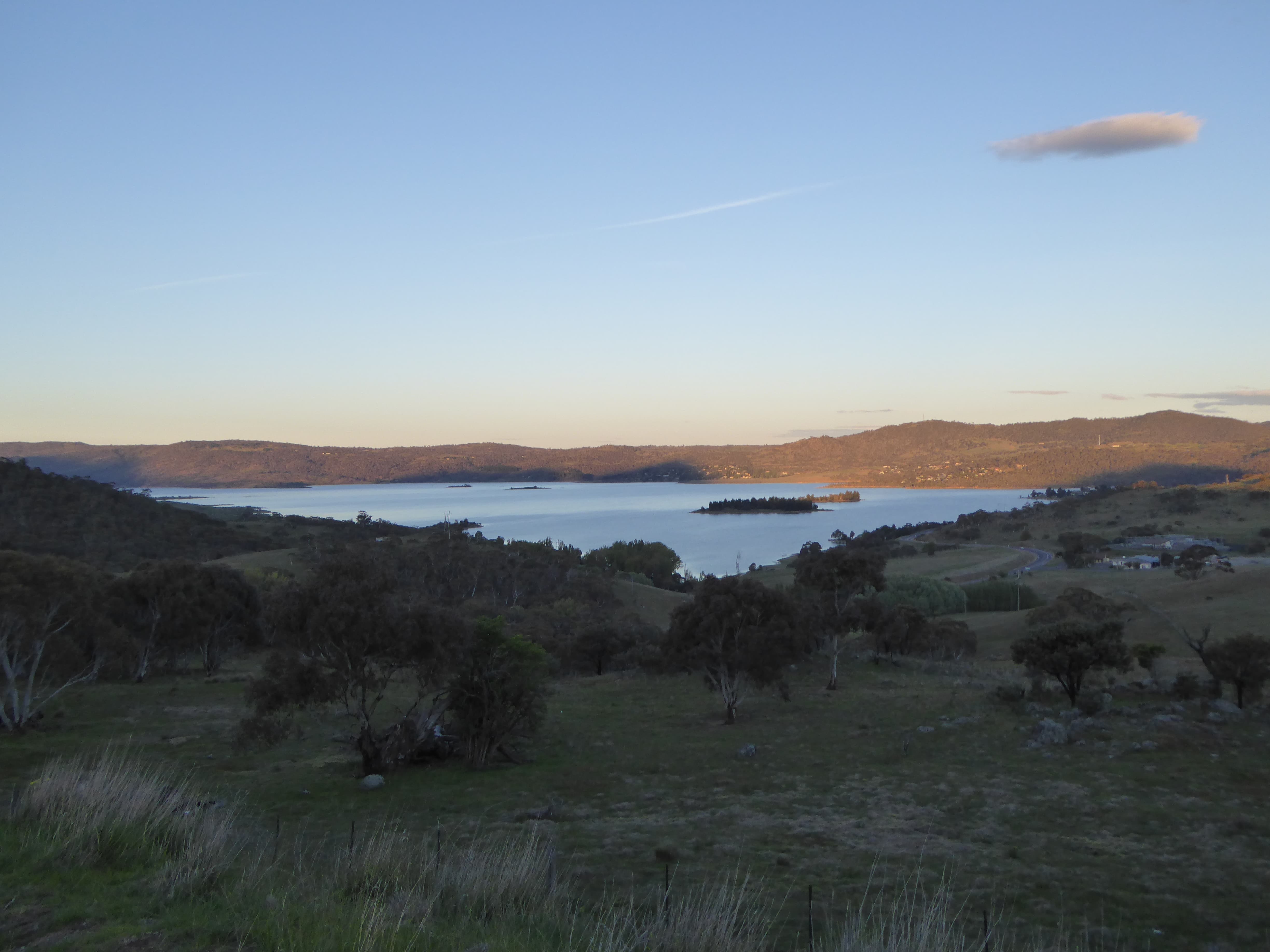 I arrived in Jindabyne as the sun went down.

Yesterday had taken its toll on me and the following morning I watched the horizon for fear of leg bursting hills although it was never that hard again. I was forgetting to enjoy the bush and the lush alpine pastures. All around me birds squawked, vibrant red rosellas, budgerigars, shiny black currawongs, sulphur crested cockatoos rose in white clouds then dropped back to ground as I passed. The bush was alive again after a cold alpine winter. Lizards and snakes came out onto the roads for warmth usually with an unhappy ending. Somehow this snake survived the traffic as I rode past with my legs higher than the handlebars ! 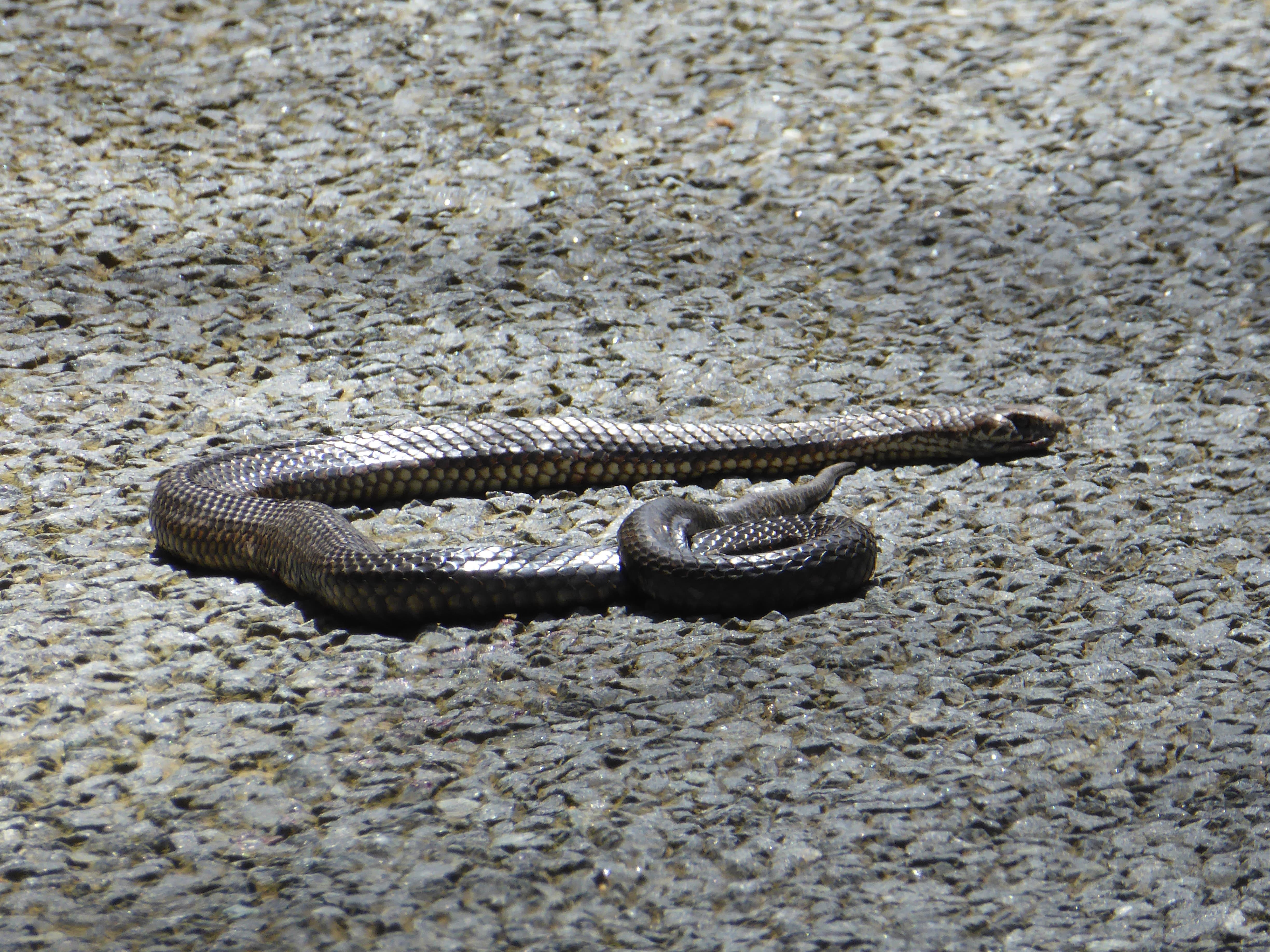 The trouble with snakes is that you are on them before you know if they are alive or dead.

Rotting wombats and dark bush wallabies littered the road at five klm spacing, my nose usually twitching well in advance of seeing the carcass. My mouth closing for as long as I could hold my breathe, sealing my body from the stench. As I neared the coast I followed noisy rivers flowing through dense hardwood forest with the sound of bellbirds and their resonating ding piercing the air.
I came to Eden, near Merimbula when I was about twelve years old. It seemed like the best, most unspoilt place in the world. I was sure it would become “The Place”, it never really has. Cheap airfares, cheaper accommodation in warmer, more exotic destinations has meant that it has stayed pretty much as it was. The Merimbula Bowling Club is still one of the biggest in the land but that also says it has one of the oldest populations in Australia. I sat sipping a beer watching locals in stretchy pants play bingo, bet on horses and dogs whilst eating oversized battered everything till I had to leave. I walked the estuary littered with floating oyster beds all anchored defiantly against the chopping waters and big tidal changes. I felt lucky and they should too, I don’t eat oysters.

Sunday morning was bright and sunny and I ventured out towards Tura Beach an old mate has chosen to call Tura home except he wasn’t there. He was miles away on the opposite side of the country, Western Australia. It was supposed to be my day off yet I was sweating on a steep climb I’d never noticed in all my years of driving a car around these parts. In fact the whole area is hilly. The afternoon was hot enough for a swim, the perfect finish to my day. no towel, no bathers I dried as I walked back to town past a cafe where a band was playing old covers. It drew me in like a moth and I swayed to the rhythm of the music or was it the beer as darkness came. Second night in a row at two burns Thai. All around the room I watched people turning bright red as the chilli did its thing.

Monday morning, I packed my panniers and rode out to the airport. It was less than an hour till the flight yet the airport was still closed. Evidently between the 6.30am Sydney flight and the 8.30am Melbourne flight they all go home for breakfast. How civilised ! I taped the front wheel to the bike frame and that was it. See you in Melbourne I whispered to my trusty stead. 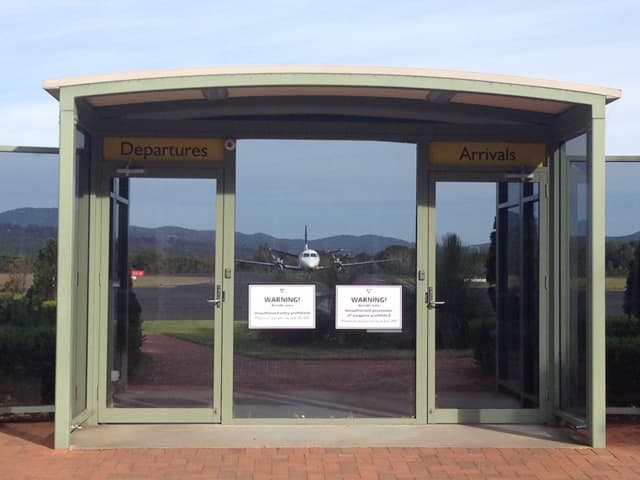 Security ? Honest folk in Merimbula. Through you go…your plane awaits.

A mixed group of business people and holiday makers crammed into a thirty seater. The stewardess screamed above the roar of the twin jet engines. If you see smoke tell me. If you feel sick there is a small toilet at the back, I looked behind, it was the size of a cupboard, locked in there would make me sick. A beautiful spot, Merimbula.
Then we were off flying at low altitude, wheeling out over the ocean for one last glimpse of Merimbula then back in Melbourne before we knew it. Me ? A little bit fitter and greater respect for the Australian Alps.