It was supposed to be five days Pre-Christmas catch-up with my brother in Singapore. I made contact he replied soon after that he wouldnt be there. Great, I’d already bought the tickets. So no Christmas catchup reliving Christmas horror stories of family fighting and eating till you were sure you’d explode. Instead I started exploring what else to do near Sngapore because five days shopping in Singapore shouldn’t be on anybody’s wishlist. I decided on Northern Sumatra, there would be no luxury shopping and endless plazas. Just local people living a simple life as they have for centuries with not a single piece of tinsel in sight.

The following morning a surprised, no stunned Sally (she thought she was spending five days in Singapore) was dragged back into the airport for a short flight to Medan, North Sumatra. A driver took us across the country to Lake Toba, a huge and very beautiful volcanic lake. We caught a rickety ferry to the nearby island and visited some local houses and temples. It took a while for the ferry to load with a mixture of drums of fuel rolled up two skinny planks followed by revving motorbikes which were then lashed to the sides, skittish animals and nonchalant local passengers.We cruised the lake on old wooden ferries with the crew sweeping a constant flow of rainwater off the decks between torrential showers. I don’t think either Sally or I had seen rain so heavy and loud in our lives. The local people went about their business in total disregard to the deluge around them. 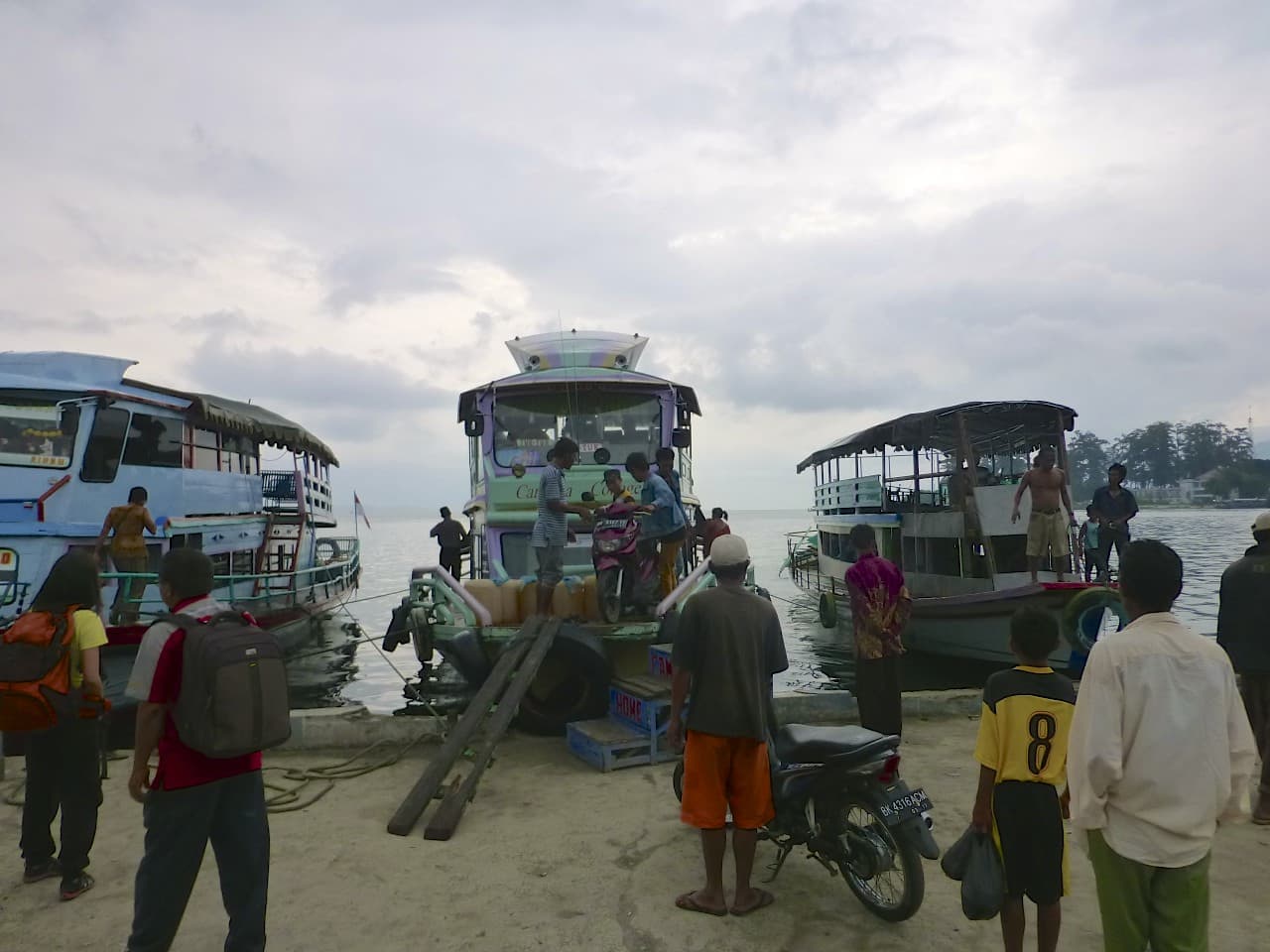 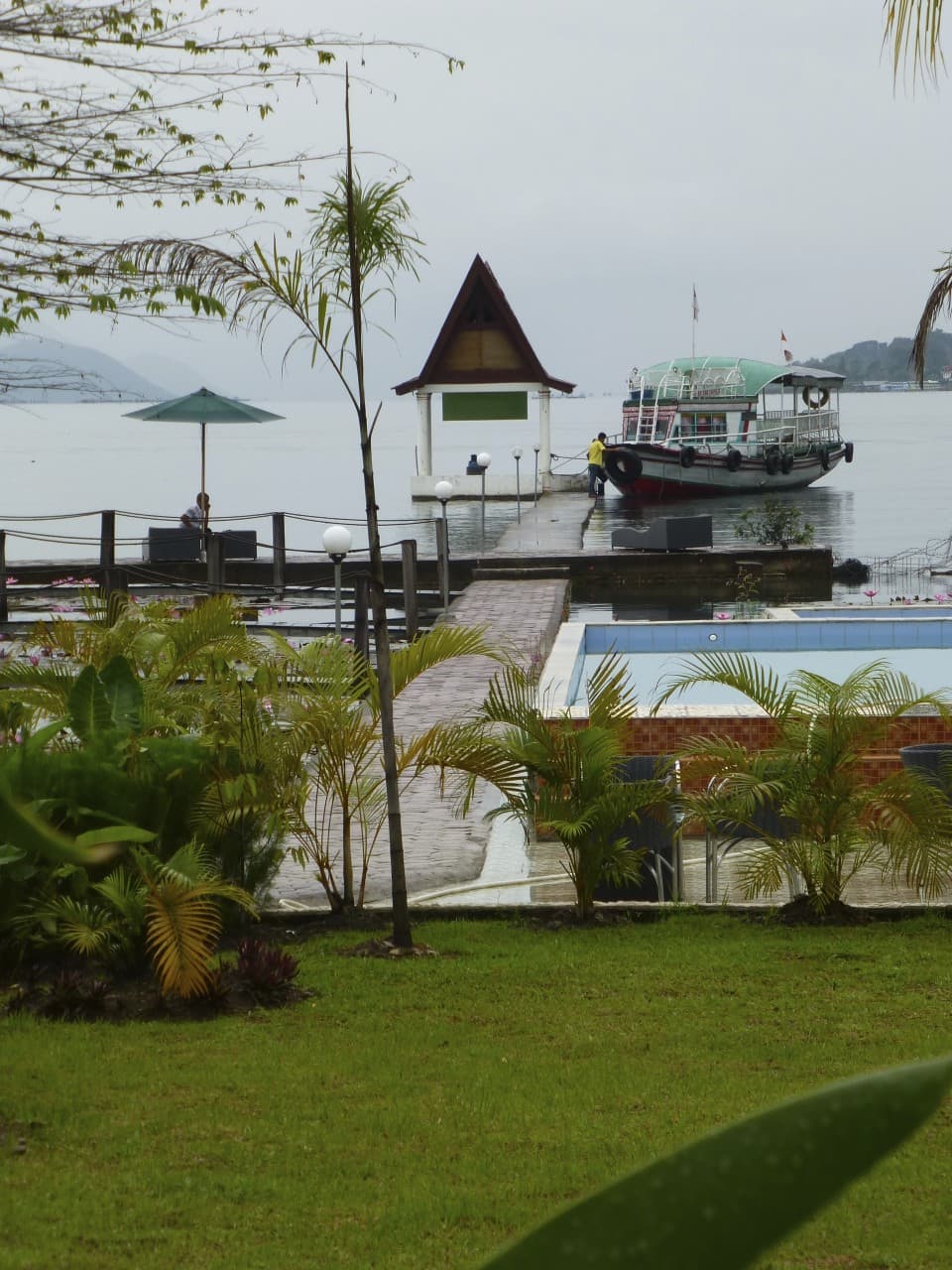 Arriving at our small hotel. 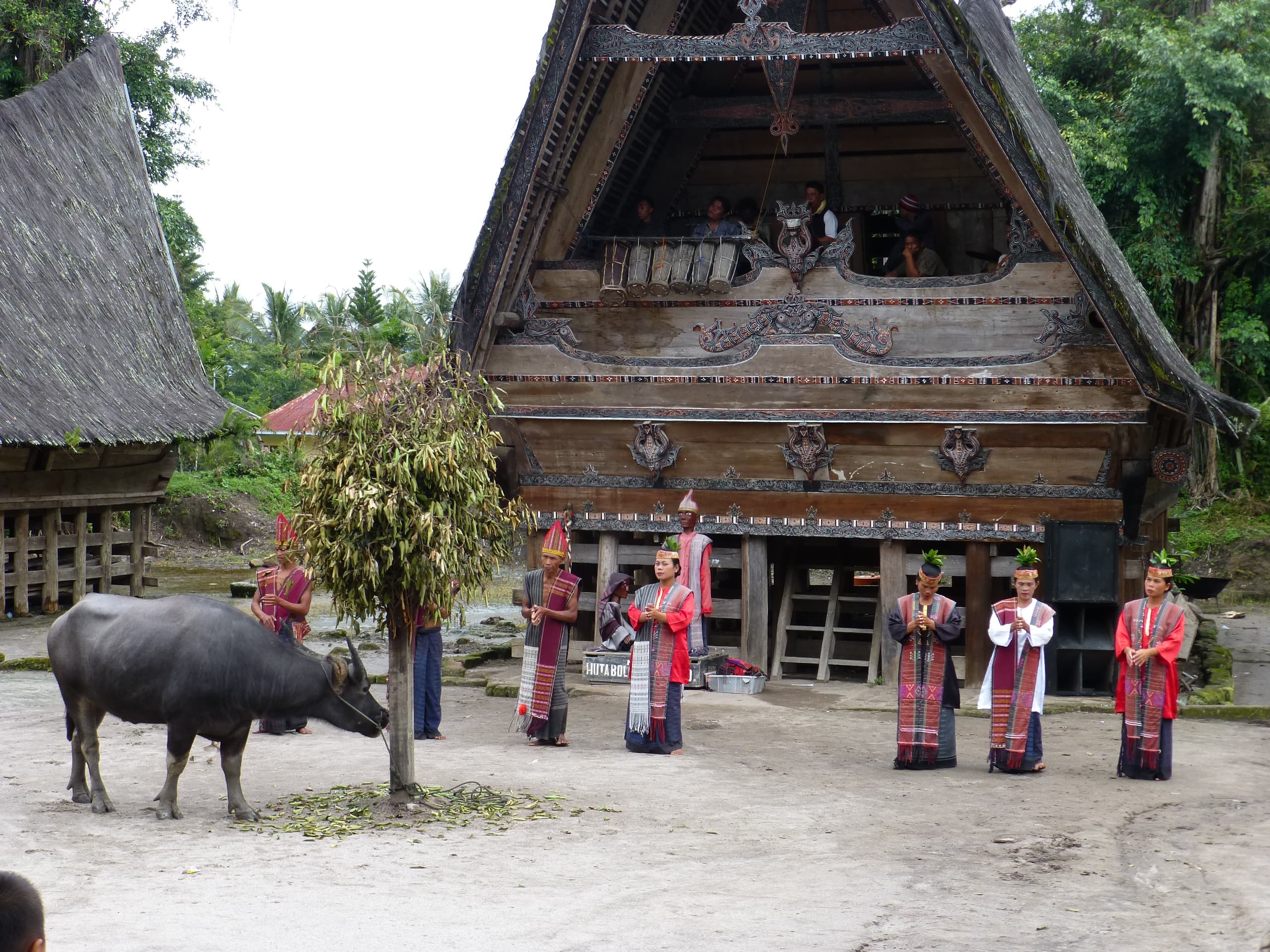 A ceremony and story telling on the Island
Two days ago we went back to the mainland and drove forever across the country to Bukit Lawang, a National Park North of Medan where there was once a rehabilitation centre for orangutans. We arrived there on dusk, stepped from the air-conditioned car into steamy jungle, great I thought till I started to feel the mozzies bite clean through my clothes? We sat at a table with our guide for the early morning trek slapping our arms, legs and back, welts the size of fifty cent pieces were all over Sally by the time the tour briefing was over. Three large bottles of Bitang Beer an hour later only partially anesthetized the bites. A mosquito net slung over the bed only lulled me into a false sense of security that my sleep would be restful, the beer, the bites and the jungle chatter had me rising every two hours till the local roosters started their chorus. The hotel is an Eco lodge which was short for open air washing, no hot water and a slow turning fan. Actually it was short for ‘slightly better than sleeping on the ground’. 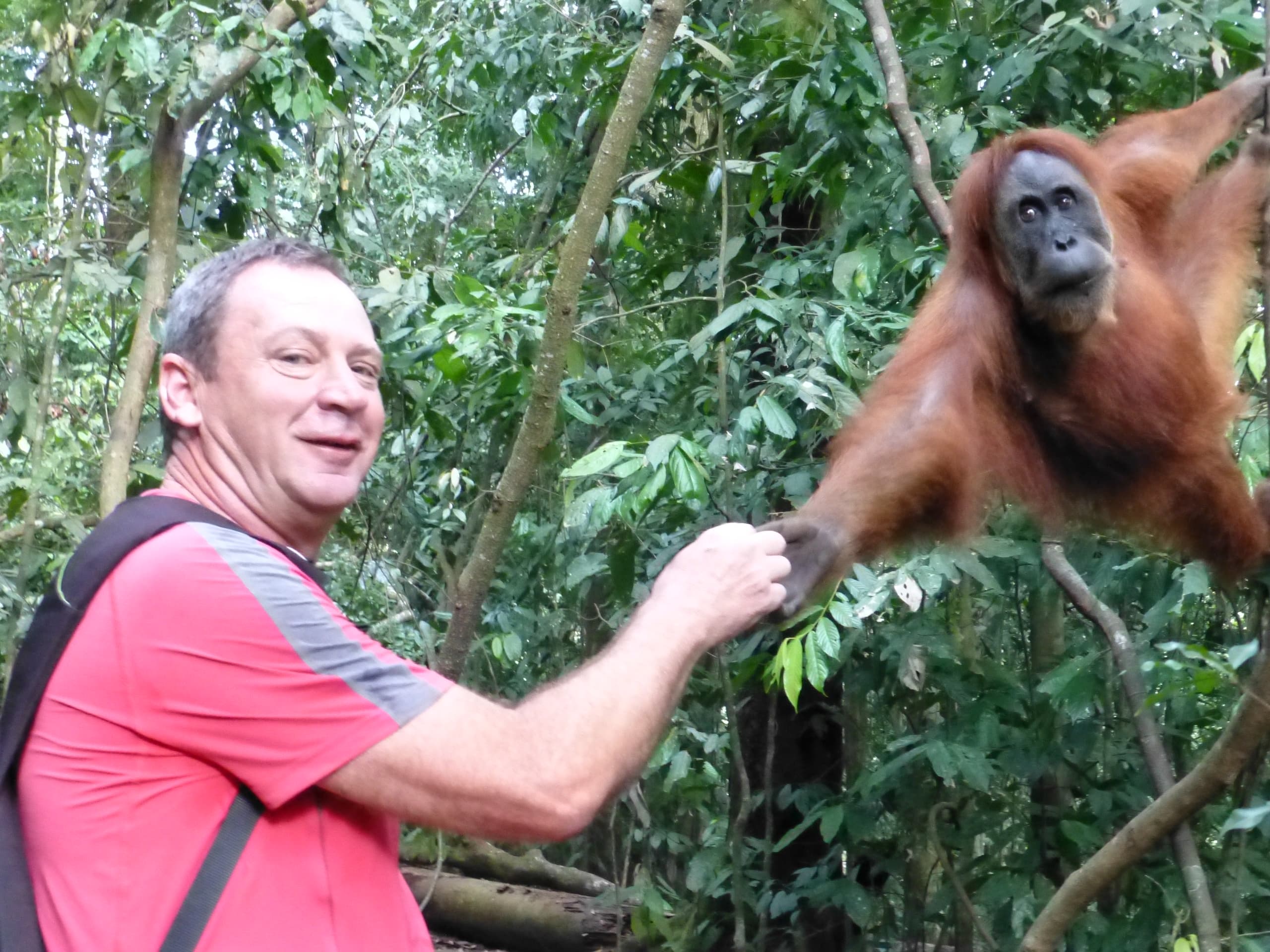 I was posing for the camera whilst the orangutan had one eye firmly on me. 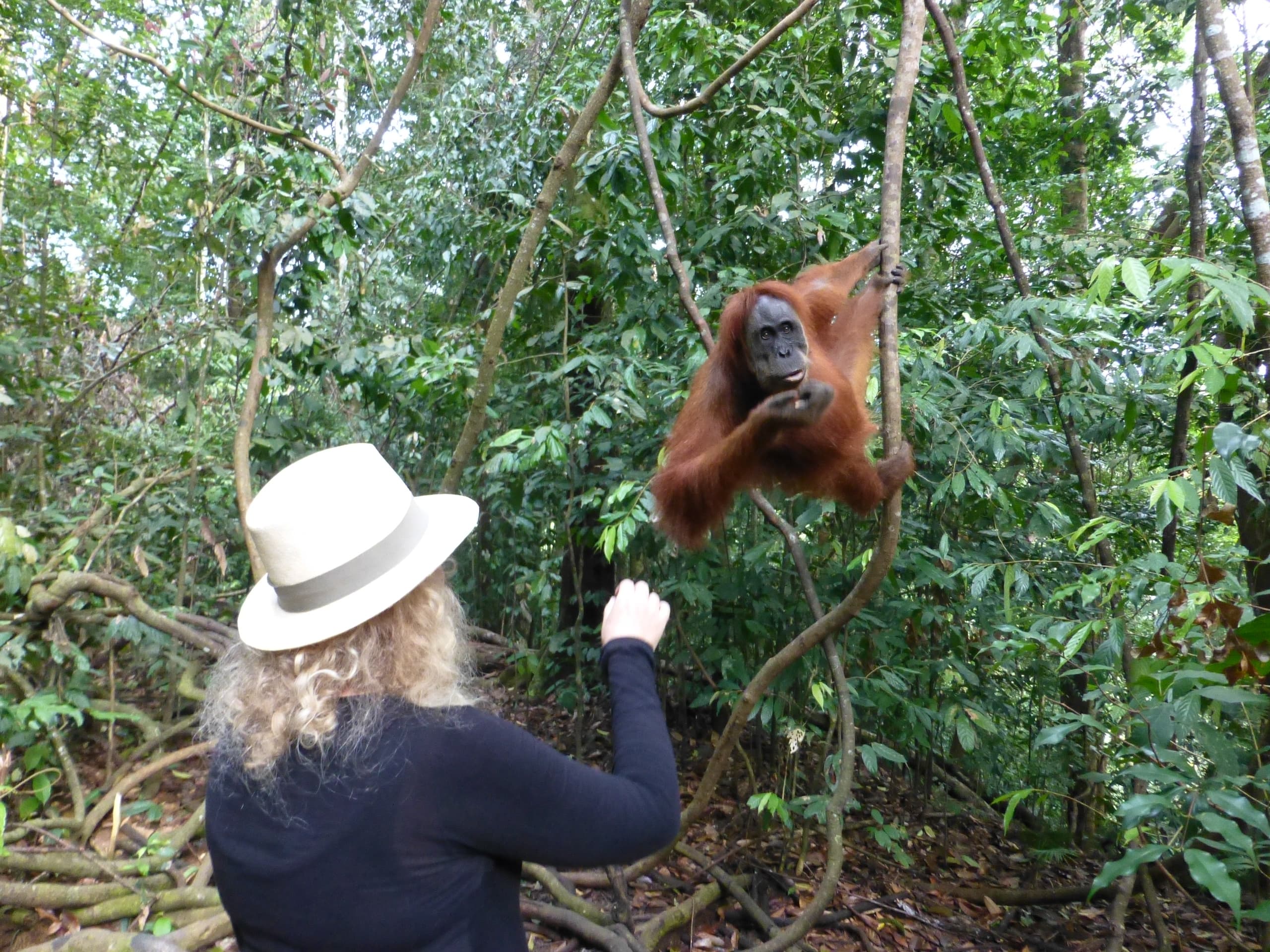 Sally in a state of disbelief as the orangutans come down for food.
Our guide looked far fresher than us. He spent the first fifteen minutes of our walk convincing Sally that the monkeys,screaming hilariously in the trees above wouldn’t steal her passport, pull out her hair or make jokes about her outfit. Sally meanwhile concentrated on not slipping over on the wet, slimy track. After an hour and numerous animal like calls from our guide to his spotter we walked into a small clearing. High up in the trees a large male orangutan peered down. The spotter produced a banana which had an immediate response. The overhead tree canopy came alive as the male orang-utan gingerly lowered himself down through the bendy branches to ground level. Something must have spooked him because it took a little while for him to finally reach out and take the fruit. The spotter drew the large male away with more enticing fruit which allowed six other smaller orangutans to carefully come down for banana and mandarin. We both had the chance to feed them and it was eerie to have these wild animals stare deeply into our eyes. A mother and baby sat high above peering down with us staring up. They too looked like they were happy not to have to listen to my brother’s Christmas stories nor eat all that Christmas cheer. Then again they should have been invited, they’re almost family. 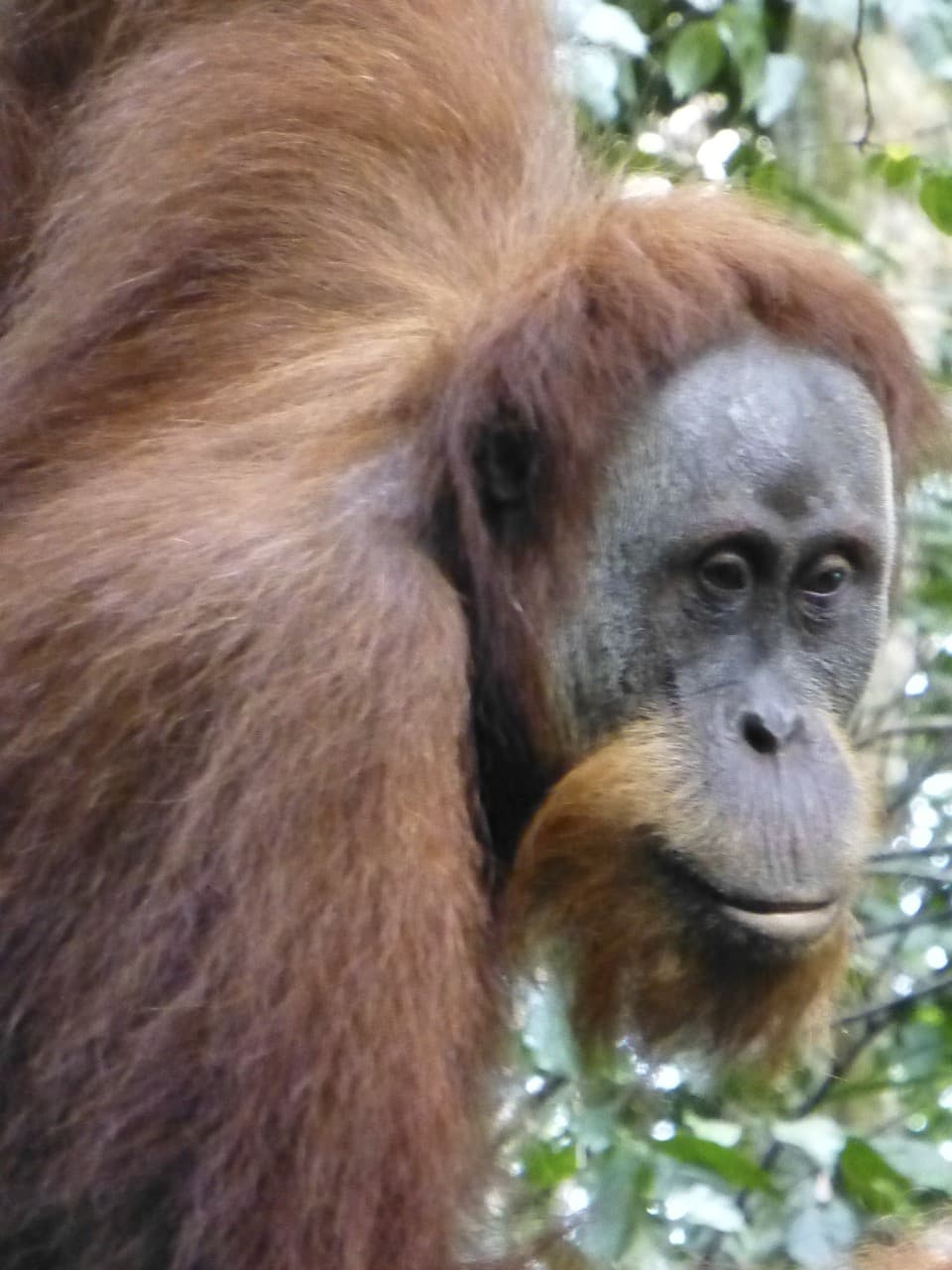 He said he didn’t get an invite to Christmas…again.

Special thanks to Andhika Putra at backyardtravel.com for helping me decide on Northern Sumatra at such short notice. Appreciated and exceeded expectations.